A union shop where B.C. workers are owners

Vancouver Island pulp mill celebrating its 10th anniversary under a model where employees own 25 per cent of the company
0
Oct 3, 2018 2:05 PM By: Glacier Media 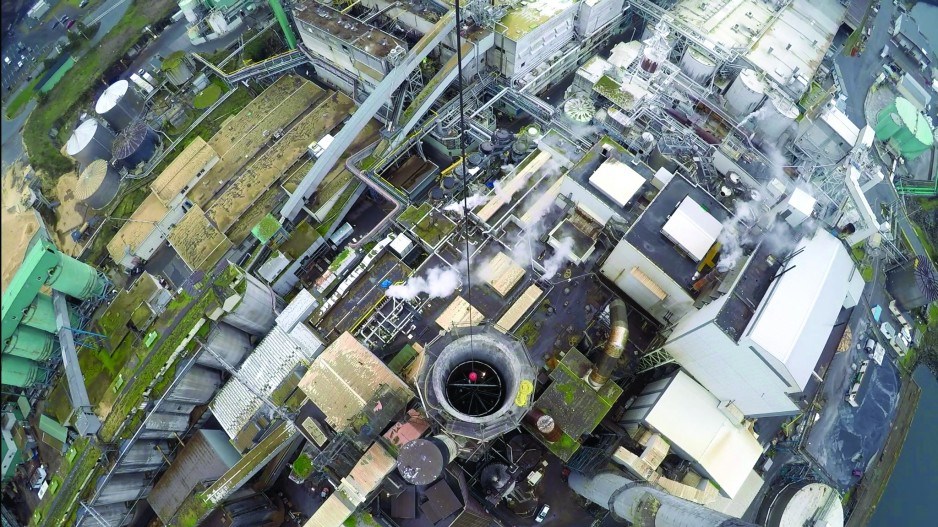 Aerial view of Harmac Pacific pulp mill, which was forced into receivership in 2008. (via Submitted)

Ten years ago, the city of Nanaimo faced the prospect of one of its largest employers and industrial taxpayers shutting down.

Pope and Talbot, the American company that owned the Harmac Pacific pulp mill, was forced into bankruptcy and had shut down the mill in May 2008, putting hundreds of workers out of a job.

In a desperate bid to save the mill and the hundreds of high-paying jobs it sustained, the mill’s employees banded together with a plan to buy the mill, which was in receivership.

They soon realized that on their own they would not be able to come up with the $13.2 million they would end up paying for the mill, so they approached a number of businesses to invest. But the employees were competing with other potential buyers, including the City of Nanaimo.

The mill’s union, Local 8 of the Public and Private Workers Union of Canada (PPWC), ended up putting up a $300,000 deposit.

“The people of Harmac were very fortunate that the union was there, because we had a bank account,” said Local 8 president Gerald de Jong. “To show the court that we were serious, Local 8 PPWC put down over $300,000 and put it down in front of the court and said, ‘We’re serious.’”

In the end, the court ruled in favour of the employee bid.

“It was pretty unprecedented at the time, because the judge ruled against the receiver’s recommendation and decided to award the mill to the workers and let them give a go at it,” said Harmac president Levi Sampson, whose family was among the private investors.

In addition to Sampson’s family, several other private investors and businesses, including Pioneer Log Homes of BC in Williams Lake and F&M Installations in Nanaimo, came up with the lion’s share of the investment. Employees now own about 25 per cent of the company; private investors own the balance.

For the employees, it was a huge risk, because it required each of them to invest $10,000 up front and commit to $5,000 a year for the next three years, with no guarantee that the mill would survive.

“A lot of these guys had been out of work for at least five months,” Sampson said. “So to come up with $10,000, it took a lot of soul-searching for our workers and their families to decide, ‘Hey not only am I out of work and haven’t been receiving a paycheque, but now I’m going to invest in this mill and we’re going to try to make a go of it ourselves.’ It was a big risky venture.”

The risk was compounded by the fact that pulp prices had collapsed, which meant the first shipment under the new ownership arrangement was sold at a loss.

“We bought the mill and got it up and running in September, and the bottom fell out of the market, and then we had the economic collapse in 2008 in the fall,” Sampson said. “So not only were we buying this asset and trying to make it run, but pulp prices were collapsing worldwide.”

But the mill persevered and eventually managed to retain customers, 70 per cent of whom are in Asia.

“It was extremely hard to get the customer base back, because – just like the analysts were writing – the customers were asking, ‘Are you guys going to be around in a month or two?’” Sampson said. “We slowly established ourselves as one of the more reliable companies to do business with.”

The mill resumed operation with a single line and 228 workers. It later expanded to two lines. The mill currently employs 330 full-time workers, most of whom are shareholders.

As employee-owners, mill workers draw a regular wage but also receive shareholder dividends when there is a profit. When a new Harmac employee is hired, after a probationary period, he or she is required to make the same $25,000 investment as all the other employees.

When workers retire, they have the option of selling their shares in the company or keeping them.

Harmac remains a union shop, which presents an unusual dynamic in which employees are both union members and company shareholders.

“It’s not without its warts, but it’s working.”

Sampson said there are definite advantages to the employer when unionized employees are also shareholders.

“Our sick days and disability days have gone down substantially since going to an employee-owned model,” he said. “I think it’s just that everybody cares a little bit more, and they take more pride in their workplace because they own it.”

Sampson added that, since the mill restarted, Harmac Pacific has invested $200 million in capital upgrades to the mill and has paid $20 million in municipal taxes.