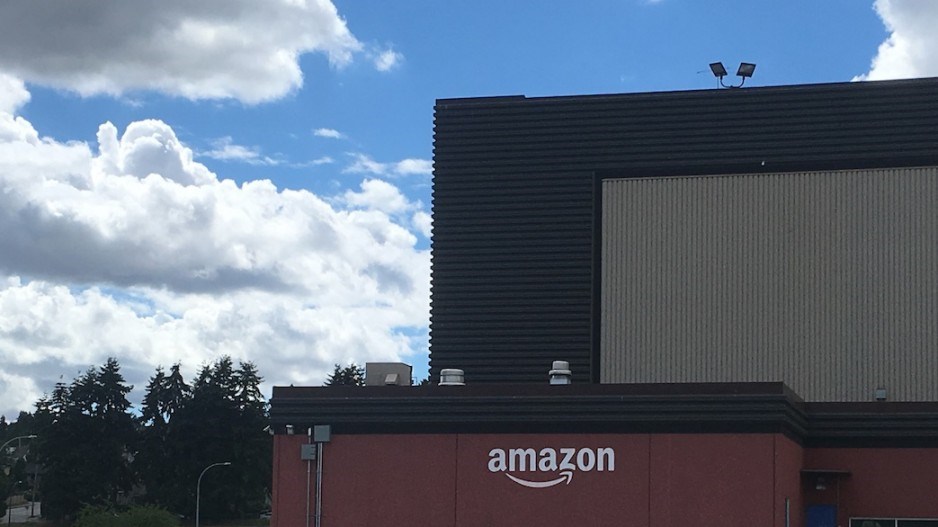 One of Amazon.com Inc.'s other two Metro Vancouver fulfillment centres is next to Braid Street Skytrain station in New Westminster. (via Glen Korstrom)

E-commerce giant Amazon.com Inc. plans to add a third and its largest Metro Vancouver fulfillment centre: a 450,000-square-foot site on Tsawwassen First Nations Land that will be in addition to fulfillment centres on Annacis Island in Delta, and in New Westminster next to the Braid Street Skytrain station.

The shell of the future Tsawwassen fulfillment centre that Amazon will lease is built and Amazon is set to make improvements.

"The entire inside still needs to be filled out – all the conveyance, all the machine learning, all the many different pieces of industrial and electronic equipment that go inside an Amazon fulfillment centre, none of that has begun yet," Amazon spokesperson Lauren Lynch told Business in Vancouver after the announcement.

Amazon expects that the centre will create more than 700 full-time jobs, the company said in a Sept. 27 news release.

Workers at the new centre will pick, pack and ship customer items such as books, toys, small electronics and home goods.

Lynch would not give a firm date on when the centre would open but she stressed that the centre will be operational in time for the 2019 holiday season.

"It will be staffed up and producing and completed and done in order to be useful and pressed into service in terms of the holidays," she said.

The two existing Amazon fulfillment centres employ about 800 full-time employees while the company also employs about 1,500 British Columbians in downtown Vancouver offices. Amazon has plans for a 1,000-employee office at 402 Dunsmuir Street by 2020. It announced in April that it will hire an additional 3,000 workers to work in QuadReal’s The Post development on West Georgia Street, when that project is completed, likely by 2022.

Amazon is currently hiring for hundreds of full-time and seasonal positions across the country as the company ramps up for the holiday season.

“Tsawwassen First Nation (TFN) welcomes Amazon to our lands," said TFN Chief Bryce Williams. “This is a promising advancement that will continue to unlock the potential of TFN as a leading development partner and key economic driver in Metro Vancouver, and we thank our partners GWL Realty Advisors and HOOPP for their roles in bringing this exciting agreement to fruition.”

Williams added that initiatives such as the one with Amazon play an important role in creating “a strong, prosperous and united TFN.”

When the new facility opens in 2019 it will be the company’s 10th fulfillment facility in Canada. Other centres are in Ontario and Alberta, Amazon said.

“Since first opening in B.C. in 2012, we credit our exciting growth to the incredible customers and outstanding workforce of the Lower Mainland community,” said Glenn Sommerville, director of Amazon’s operations in Canada.

“Our ability to create over 700 good-paying jobs with great benefits is thanks to the network of support we've received from the Tsawwassen First Nation executive council, provincial and community leaders, and strong project partners dedicated to innovation.”

Positions for which Amazon is hiring are available to view by clicking here.

B.C. courts continue return to normal operations
Jul 8, 2020 11:05 AM
Comments
We welcome your feedback and encourage you to share your thoughts. We ask that you be respectful of others and their points of view, refrain from personal attacks and stay on topic. To learn about our commenting policies and how we moderate, please read our Community Guidelines.