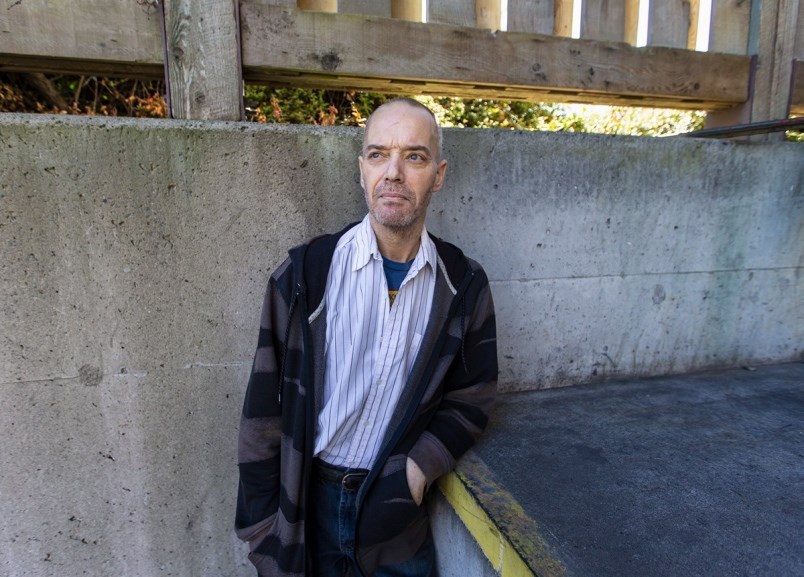 Terry Willis, who needs treatment for cancer. (via Darren Stone)

A cancer patient who lives in a supportive-living complex set up in response to a downtown tent city has been offered accommodation that will allow him to receive chemotherapy treatments.

Fifty-year-old Terry Willis has a rare form of non-Hodgkin lymphoma — he has described his condition as terminal — and has a letter from a doctor indicating that his temporary housing at 844 Johnson St. is not suitable for someone undergoing chemotherapy because of the infection risk.

Willis can move into a temporary room at Our Place if he chooses, said executive director Don Evans. The social agency offers 45 units of transitional housing, including two short-term rooms, in addition to meals and other services. “We’ve offered him a room here so that he can do his treatment,” Evans said.

In the meantime, a group of businesspeople is ready get behind Willis with any help he might need. Frontrunners owner Rob Reid said the group got together after reading about Willis’s dire situation in the Times Colonist. “It’s hard not to move you,” he said of the newspaper’s account. “Somebody with cancer should get treatment.”

Like others, Evans said Willis is not alone in his predicament.

“The reality is that there’s a lot of people in those positions,” said Evans.

“We see people with significant health concerns coming in on a regular basis.

“We try to do what we can to help them, but it can be difficult if they don’t have a home.”

Housing would alleviate much of the problem, he said.

“What ends up happening often here is they end up in the hospital, and that’s an expensive way to be caring for people that are just going to need a home.”

Hilary Marks, Willis’s social worker, said she has also been contacted by senior management with Capital Regional District Housing to discuss the situation.

“We’re still looking at every option that’s coming in,” said Marks, adding that she would like to find a long-term solution for Willis.

Marks said that she and Willis are grateful for everything that is being done on his behalf.

Island Health has issued a statement saying that a multi-agency team considers the Johnson Street building suitable for people being treated with chemotherapy, but Marks disagrees.

“I don’t think that Terry should be in that building at all when he has chemo and radiation.”

Marks has been doing all she can to find Willis a new residence after reading the doctor’s letter, which warns that if he undergoes chemotherapy while living at 844 Johnson, he would be at high risk of infection.

Willis said he has been living on the street for two years since losing his wife, Sandra, to cancer. Prior to moving to 844 Johnson, he slept on mats at First Metropolitan Church, he said.

He was diagnosed with cancer in 2011 and initially given five years to live.