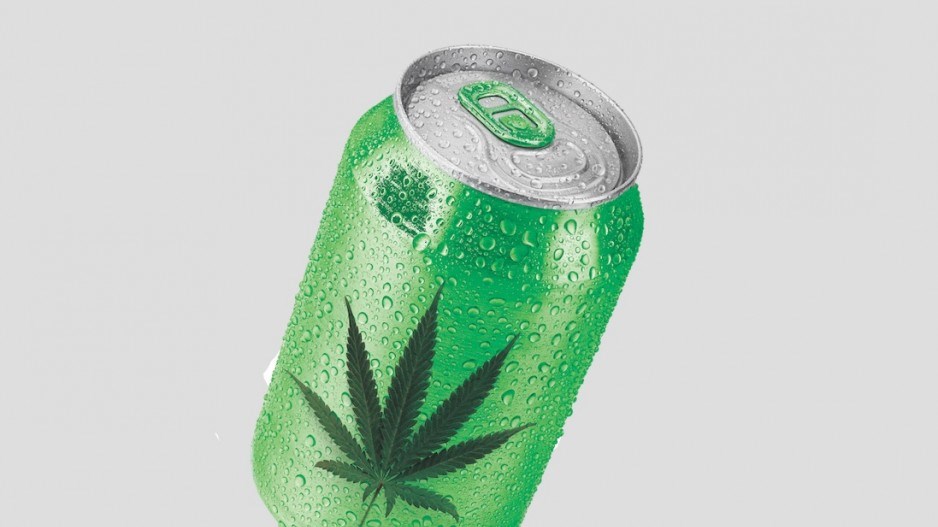 Infused drinks with cannabinoids, such as THC or CBD, is a sector estimated to be worth US$600 million by 2022. (via Randy Pearsall/Business in Vancouver)

As soda and beer sales fall in North America and legal marijuana sales spike, soft drink makers and brewers are partnering with cannabis companies to expand their market horizons.

The trend has in turn spurred B.C.-based companies such as Tilray Inc., Ascent Industries Corp., Emerald Health Therapeutics and Chemesis International Inc. to jump on the research bandwagon to improve technology for infusing drinks with active cannabis ingredients.

Canaccord Genuity has estimated in a research note that the cannabis-laced drinks sector could be worth US$600 million by 2022.

While alcohol manufacturers want to produce beverages infused with the psychoactive cannabis ingredient tetrahydrocannabinol (THC), beverage maker Coca-Cola Co. said in a September 17 statement that it is “closely watching the growth of non-psychoactive CBD (cannabidiol) as an ingredient in functional wellness beverages around the world.”

THC and CBD are two of at least 113 distinct cannabinoids found in cannabis. THC alters brain function and provides a high while CBD has properties that can alleviate stress or numb pain. THC-laced drinks are legal in nine states and the District of Columbia. CBD-laced drinks, however, are set to be legal across the U.S. after the U.S. Senate in June approved a bill to legalize hemp farming.

The result is that demand for infused drinks is likely to grow even as two main obstacles stand in the way of creating commercially viable cannabinoid-laced beverages. One problem is that many people do not like the taste of cannabinoids; the other is that cannabinoids are difficult to infuse into water-based drinks because they are oil-based in their purest form.

The drive to make cannabinoids water soluble, however, stems not just from consumers’ desire for homogenized drinks with a consistent texture, but also from a delay in the effects of oil-based cannabinoids, which bind with fat in the human body before they’re absorbed. That means that they are not felt for 90 minutes or more. Alcohol, in contrast, fuses with water and is absorbed quickly into the bloodstream.

“No one wants to drink a glass of Chardonnay and feel it an hour and a half later,” said Tilray CEO Brendan Kennedy in a September 18 interview with CNBC host Jim Cramer.

He added that Tilray is spending all of its research and development time on finding a way to solve the cannabinoids-delay problem.

Ascent Industries CEO Philip Campbell said his company has found the answer to both obstacles facing infused-drink makers. Ascent’s Agrima Botanticals subsidiary, which has a cannabis growing operation and lab in Maple Ridge, has applied for a patent on a compound that Campbell said can be added to infused drinks with the effect of making cannabinoids water soluble.

Agrima tested the compound in drinks in Oregon with subjects who were able to feel the effect of the cannabinoids in about 15 minutes, he said. That testing, Campbell added, would not be legal in Canada, where cannabinoid-laced drinks will not be legal until at least next year.

Agrima has also stickhandled around the problem of foul-tasting cannabinoids, according to Campbell, who said that the taste that people associate with cannabinoids is not from the pure cannabinoid, but rather from waxes, lipids, chloroplasts, chlorophyll and other trace compounds that compose about 30 per cent of the oil after an initial extraction with a solvent.

Ascent went public on the Canadian Securities Exchange via a reverse takeover on August 9. The company reported no revenue in its most recent earnings report, which covered the six months up to June 30.

Campbell told Business in Vancouver that Ascent’s U.S. operations have started to generate “negligible” revenue. He added that Ascent’s Canadian division, which employs about 120 of the company’s approximately 160 employees, is waiting for a Health Canada sales licence.

The licensed producer harvested its first Canadian crop in March and is storing that product in a vault that is temperature- and humidity-controlled to maintain freshness, he said.

The operation is now harvesting cannabis at a rate of about 2,000 kilograms per year, said Campbell.

Some of the companies researching cannabinoid-infused drinks are ventures within the broader cannabis subsector that have flown high in recent months but have also had bouts of extreme volatility.

Increased investor interest in the space has resulted in many companies shifting business models to the cannabis industry, issuing more press releases and going public via reverse takeovers – a situation that should increase investor vigilance about researching which companies merit investment consideration.