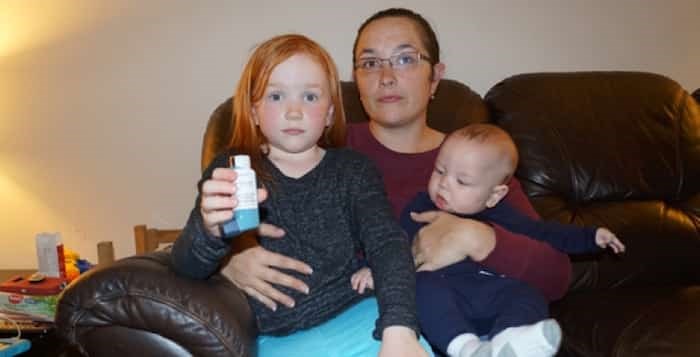 Tania Tisdale, who claims her six-year-old daughter has developed asthma and respiratory problems from having lived in a mold-plagued unit at Ladner Willows for five years. (via Graeme Wood)

Families living in a social housing complex in Ladner say they’ve been left in the dark over dangerous and ongoing mold problems within their units.

“Nobody’s come in to fix anything in my house. I haven’t been contacted. Nothing. No phone calls. No notices. But mine is one of the worst,” said Tania Tisdale, who claims her six-year-old daughter has developed asthma and respiratory problems from having lived in a mold-plagued unit for five years.

“About six months after we moved in I noticed a pattern in her cough; that it was lasting two to three weeks. But it would come back. It took three and a half years of non-stop walk-in clinics. They (clinic doctors) just kept telling me it was a cold,” said Tisdale, whose daughter was finally diagnosed and put on inhalers.

Two units over from Tisdale is neighbour Alex, whose wife gave birth to their newborn daughter in late September. Alex, who didn’t want to be fully identified, said his wife underwent stress due to their precarious housing situation and then went into labour weeks ahead of term.

Reports of mold have plagued Ladner Willows, a 30-year-old, 40-unit complex, for years, according to residents. The mold problem appeared to reach another tipping point this summer when a City of Delta inspection report noted landlord Red Door Housing Society had been violating the Residential Tenancy Act for “deficiencies” that do not comply with health, safety and housing standards.

But instead of fixing the units, Red Door Housing, a registered charity and non-profit housing provider, has chosen to empty the units in order to redevelop the site, citing inability to pay for expensive building envelope repairs as the main reason.

With 16 units now empty, BC Housing said it conducted remediation reports in late August on the inhabited 24. According to a spokesperson, six units require repairs while Alex’s unit was deemed uninhabitable.

Alex, who emigrated from Russia, was moved with his now five children into a nearby hotel. The stay lasted 24 days, he said, until they were finally moved into an empty unit. To date, their old unit, which Alex says they’d prefer to live in once repaired, has not been cleaned and fixed.

Meanwhile, Tisdale has not heard from BC Housing or Red Door Housing since her unit was inspected over two months ago.

“Basically everything’s been at a standstill ever since. I don’t think one person has been in there working,” said Tisdale, referring to Alex’s old unit.

BC Housing and Red Door Housing did not respond to requests made last week for updates to the mold remediation work.

Delta South MLA Ian Paton said he has repeatedly contacted the Ministry of Municipal Affairs and Housing over the matter, although Minister Selina Robinson said last week she was unaware of any specifics.

“Red Door Housing doesn’t seem to take any responsibility for the state of the place. I’m thinking, are you kidding?” asked Paton.

BC Housing said on Oct. 12 it is waiting for a contractor to assess the needed repairs in the seven units.

“We expect that remediation repairs will enable all tenants to move back into those seven units in the coming months,” said spokesperson Laura Matthews.

At a housing announcement in Vancouver last Friday, BC Housing CEO Shane Ramsay gave assurances the units would be fixed.

“I will go back to see where we are in respect to that, because we want to ensure the units are safe for folks while they continue to live in them,” said Ramsay, who stands by the decision to empty Ladner Willows.

“If we’re proceeding with redevelopment in the short term, moving folks in just to move them out doesn’t make a whole lot of sense,” he said.

BC Housing said Red Door Housing initially applied for redevelopment in 2015 but was denied a permit. It’s understood by residents that the society is conducting preliminary, informal community consultations with the city.

Redevelopments can take several years and until then Tisdale expects the mold problems to continue. Her unit’s mold report states dehumidifiers should be installed, but she cannot afford them.