He survived on a bottle of Gatorade and a bag of apples that he had picked from his dad's yard
Nov 15, 2018 5:35 PM By: Canadian Press 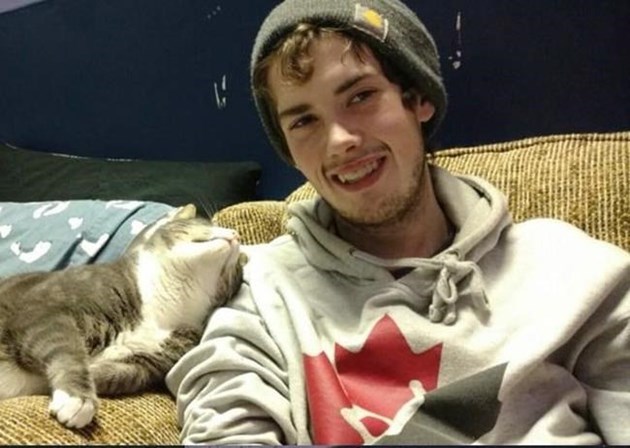 CAMPBELL RIVER, Canada — A 23-year-old Vancouver Island man is recovering in a Victoria hospital after his truck went off a cliff and he was pinned in the vehicle with a broken femur for several days.

Duncan Moffat's uncle, Bill Macnab, said his nephew survived on a bottle of Gatorade and a bag of apples that he had picked from his dad's yard, which thankfully rolled within reach.

"The car was driver-side tilted down. He couldn't undo his seatbelt because the weight of his body was on it and he had a broken shoulder, ribs, he had a partially collapsed lung as well, and he had the broken leg," Macnab said from his home in Campbell River.

"He said he found the Gatorade on the third day and just saw God when he saw that. He was just so happy to have this drink."

Macnab said Moffat had been out of touch with the family for almost 10 days, but he told his father, Glen Moffat, that he believes he was stuck in the truck for five days, after he was rescued Tuesday afternoon.

Since the family was already worried about Moffat, Macnab said that when an ambulance zipped past his father's house in Sayward, he had a hunch it might be heading for Moffat and followed it. There were no obvious signs of the accident from the road like broken trees, but a hunter had spotted the truck by chance and called 911, he said.

When Glen Moffat arrived at the "notorious" curve in the highway south of the village of Sayward where his son went off the road, he saw his own pickup truck, which his son had taken.

"You can imagine the thoughts that went through his mind originally, seeing his truck, his son had been gone for days, and now he finds him over the edge," Macnab said.

Sayward RCMP said in a statement that weather conditions and slippery terrain made it difficult for emergency crews to reach the truck on the 12-metre embankment.

When police spoke with the male driver, they said he was confused and in need of medical attention. He told them he was unsure how long he'd been trapped and police believe it was for more than 12 hours and up to "a few days."

The harrowing rescue took several hours, as rescuers needed to cut away the driver's side of the vehicle, Macnab said. Glen Moffat phoned family members from the scene and reported his son had survived.

"Everyone was just elated and beyond themselves," Macnab said.

Moffat has undergone surgery on his broken femur and is recovering in stable condition from his other injuries, which also include bruised vertebrae in his back and a lacerated spleen and liver.

The family is grateful for the hunter, rescuers and doctors who helped save Moffat's life, Macnab said.

"The whole system kicks in, in these situations, and it isn't until you're involved directly in it that you have an extreme, profound thankfulness to these guys who go out there and do this kind of stuff," he said.

Moffat's grandfather, Alex Moffat, said his grandson is a "very, very lucky boy" and described the hunter's discovery of the wreckage as "one chance in a million."

— By Amy Smart, The Canadian Press