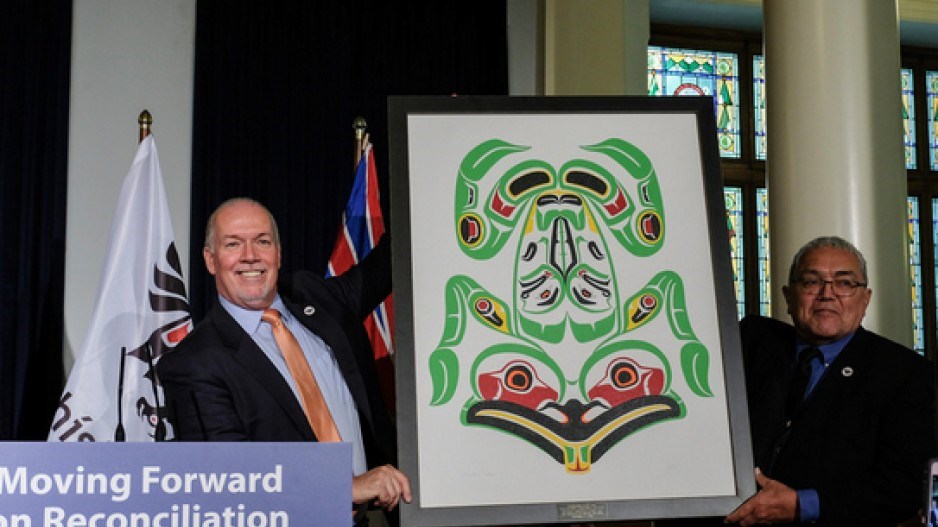 The B.C. government will hand over three parcels of Crown land and $36 million to the Shíshálh (Sechelt) First Nation in what has been described a “first” and “landmark” reconciliation agreement.

The agreement, concluded October 4, commits the provincial government to a collaborative approach to “implementation of Shíshálh title and rights.”

“Through this agreement, in the years to come, we will see the benefits reconciliation provides to all citizens of our territory,” said Shíshálh Chief Warren Paull.

The signed agreement appears to be focused on forestry.

“We’re piloting a shared decision-making process on forestry decisions in the area,” said Doug Donaldson, minister of Forests, Lands, Natural Resource Operations and Rural Development. “Through shared decision making, we gain a better understanding of each other’s priorities on the land base.

“If successful, we can expand to other land-based decisions for other sectors. And if successful, this model of shared decision-making could also be followed in other regions of the province.”

Donaldson said the agreement was “the first major reconciliation agreement between this government and a First Nation.”

As Paull pointed out, negotiations on the agreement signed October 4 actually began 23 months ago, under the Liberal government.

In 2015, the Liberal government rolled out its reconciliation commitment document, which was in response to the 2014 Supreme Court of Canada decision that confirmed title to the Tsilhqot’in First Nation.

In 2016, it signed a “government-to-government” agreement with the Shíshálh that set out the framework for negotiating a range of government issues and land transfers.

Other reconciliation agreements signed under the Liberal government include ones with the Carrier Sekani Tribal Council, Haida Nation and Saulteaux. Previous agreements with the Shíshálh include an interim agreement on forestry from 2004.

The agreement signed October 4 has a framework for government-to-government decision making over land use and forestry, among others things. In short, it’s like a chapter or sub-section for a treaty agreement that was rejected nearly two decades ago.

The Shíshálh reached stage 4 (agreement in principle) in the BC Treaty process, but in 2000, they rejected it.

Although many First Nations, including the Shíshálh, remain on the BC Treaty Commission’s list of nations in negotiations, for all intents and purposes many have abandoned the process and have opted to negotiate directly with federal and provincial governments on specific areas, such forestry tenures, land transfers, revenue sharing, and even self-government.