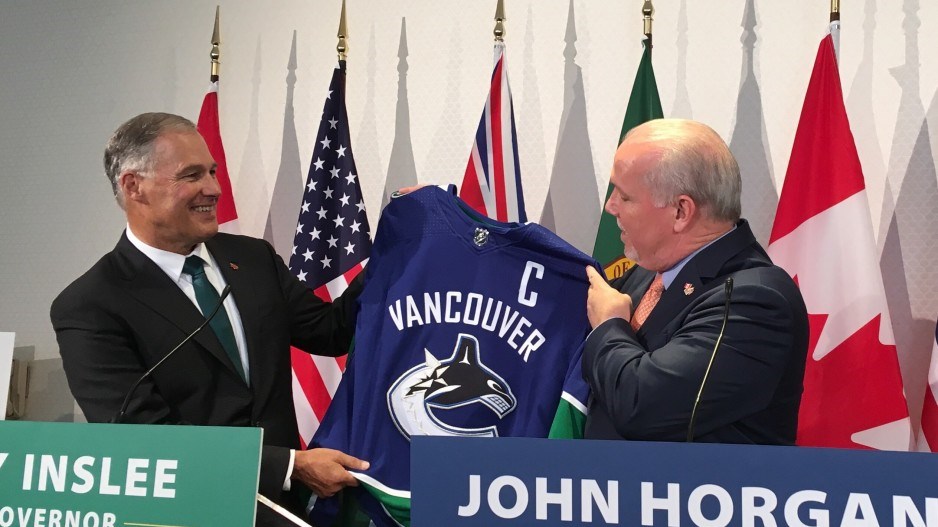 Washington state Gov. Jay Inslee accepts a Vancouver Canucks jersey from B.C. Premier John Horgan. The reverse of the jersey featured Inslee's name and the number 20, referring to the anticipated year an NHL team will arrive in Seattle: 2020. (via Tyler Orton)

“This is a great opportunity again just to be here to talk about the things that bind us together between Washington and British Columbia,” Horgan told reporters after the signing of the MOU.

Inslee and former B.C. premier Christy Clark also signed an MOU for Cascadia in October 2016, affirming a shared interest in creating tighter links between the regions’ economies, including the creation of a tech corridor between Vancouver and Seattle.

The latest MOU includes areas of collaboration such as protecting endangered southern resident killer whales, and examining the possibility of creating a high-speed rail corridor authority that would overlap both jurisdictions and lead any potential subsequent phases of the project.

“This is a sunny day in British Columbia, both meteorologically but politically because we are two peoples united in four things that we’ve already had some progress on today,” Inslee told reporters in a joint press conference with Horgan.

Inslee also acknowledged that Horgan accepted an invitation to address the Washington state legislature during its next session.

The pair engaged in some friendly ribbing as well, exchanging NHL merchandise in anticipation of plans for a professional hockey team to land in Seattle in 2020.

The co-working space provider’s new product offers clients 24-7 access to any of WeWork’s locations in Vancouver, Seattle or Portland.

Mitacs, which connects Canadian academic researchers with the private sector, will provide up to $50,000 for 10 incubator internships.

The internships are geared towards short-term entrepreneurship residencies between UBC’s entrepreneurship@UBC program and the University of Washington’s Global Innovation Exchange.