Bear head butts B.C. man in his own garage 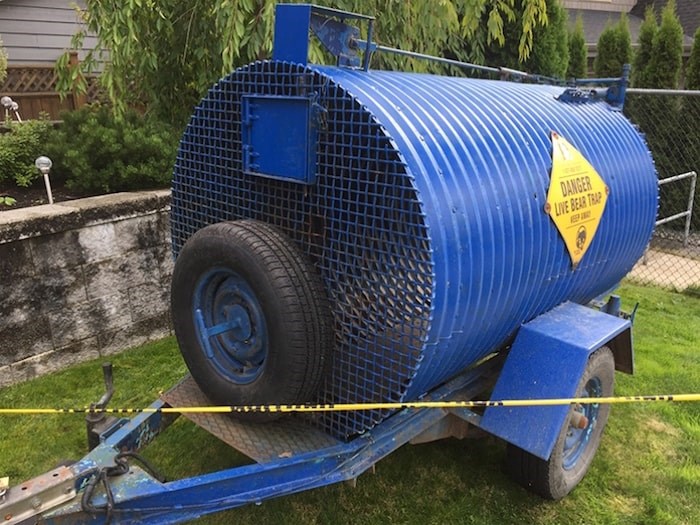 Two bear traps have been set up in the area of Horizon Drive in Coquitlam to catch a bear that knocked down a man in his garage. (via Diane Strandberg/Tri-City News)

Two bear traps have been set up and early morning patrols are being conducted on Burke Mountain after a man was knocked down by a bear in his own garage early Sunday morning.

B.C. Conservation Officer Sgt. Dean Miller said it’s rare that such an attack would occur and it was likely a defensive move by the bear rather than aggression. Measures still need to be taken, he said, because the bruin is clearly habituated to humans and getting its food from homes.

“It’s the difference between human-habituated and predatory [behaviour],” Miller said of the attack, which took place on Horizon Drive just after midnight Sunday. “Essentially, the bear head-butted him, but there was no swatting, biting or nipping.

“[The man] threw a couple of items at the bear and did manage to scare her enough to run off,” Miller said.

There was no garbage outside of the house but the bear was likely drawn inside the garage because that’s where the trash carts were stored.

“We’re intent on finding this bear and it’s going to be more challenging because this bear could be long gone,” Miller said.

Nevertheless, after a search of the area Sunday, conservation officers will be canvassing the neighbourhood early in the mornings this week for signs of the bear.

One trap has been placed next to a walking path and another on a street higher up the mountain, close to a forest in an area where construction is taking place.

As to what will happen to the bear if it’s caught, Miller said he couldn’t say for certain.

“We would have to look at the bear’s health, look at external circumstances that would cause the bear to be more highly habituated.”

Bear sightings are expected to continue because hibernation typically doesn’t take place until there have been a number of nights with frost and consistently low temperatures.

B.C. courts continue return to normal operations
Jul 8, 2020 11:05 AM
Comments
We welcome your feedback and encourage you to share your thoughts. We ask that you be respectful of others and their points of view, refrain from personal attacks and stay on topic. To learn about our commenting policies and how we moderate, please read our Community Guidelines.