Black bear stops for a paws at Lower Mainland home 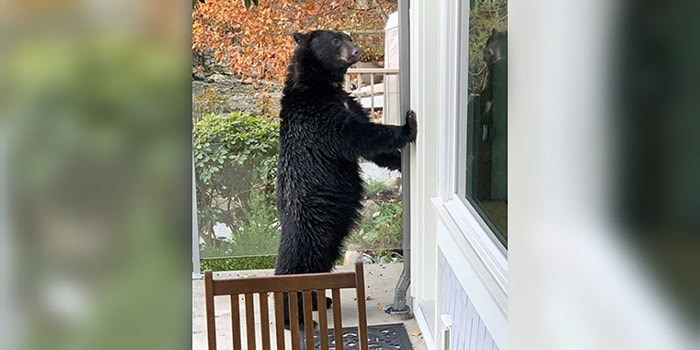 He was on the phone with a client a little before 10 a.m. when he peered out his office window and noticed a black bear was getting comfortable on his back deck.

“I thought it was just this big black dog that comes down to the deck and visits,” said Banks. “When I turned and it wasn’t this black dog anymore … it was an interesting encounter. I didn’t feel threatened or anything like that. She wasn’t trying to get in.”

After a little while Banks said the bear stood up and had a look around, at which point he managed to snap a photo from the safety of his office.

“For some reason she stood up and put her hand against the wall. She wasn’t really clawing and trying to get in. I don’t know why she stood up – she just did,” said Banks.

While Banks said he was used to getting bear visitors, he had never had one show up in the middle of the day and come up so close to his house.

The animated bruin stuck around for about 10 minutes before departing towards the ocean, according to Banks.

The North Shore Black Bear Society noted that bear sightings may be more common at this time of year as bruins prepare for their long hibernation periods. The society advised residents to stay clear of bears and be diligent about ensuring outdoor attractants, such as bird feeders, compost bins and garbage bins, were not left out for them.

“The bears are foraging up to 20 hours a day getting ready for hibernation,” said Christine Miller, education co-ordinator with the society.