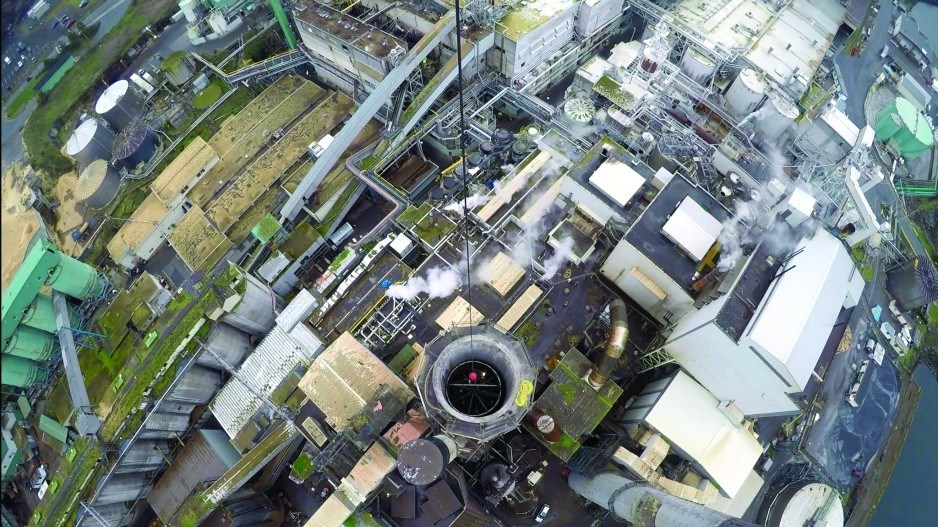 Harmac Pacific in Nanaimo plans to invest $1.7 million in dewatering technology to turn sludge into fuel. (via Submitted)

Harmac Pacific in Nanaimo will receive more than $800,000 in provincial funding for a new sludge treatment system that the company says will reduce greenhouse gas emissions by reducing the amount of natural gas it needs to burn for its boilers.

Harmac is the first company to be approved for grants under the new CleanBC Industry Fund, which is being funding through carbon tax revenue.

The B.C. government expects to approve $12.5 million under the new fund for 16 projects proposed by various industries to help them adopt technology that reduces their carbon emissions. The government expects the funding to help leverage more than $30 million in private sector investments in things like energy efficiency.

Harmac plans to invest $1.7 million in a new ionization treatment process to dewater sludge, which can then be burned in its boilers, reducing the amount of natural gas it has to burn. The CleanBC industry fund will cover about half that of the cost – $862,500.

After wood waste is turned into pulp, the sludge that is left over is currently filtered through a screw press to wring out the moisture. It is then incinerated in Harmac’s boilers, which produce steam, both for the pulp mill’s processing and to drive turbines to generate electricity.

But the filtering process doesn’t get all of the moisture out of the sludge. The ionization technology Harmac plans to install helps reduce the moisture content of the sludge to the point where it will burn, which is expected to reduce the amount of natural gas that the company uses to fire its boilers.

“We can only get to about 25% solids content right now, so we’re more incinerating it than burning it,” said Ryan Prontack, Harmac’s engineering superintendent. “So what we’re trying to get to, with this project, is to the point where we can get it dry enough that it does burn on its own.

By using the drier sludge as a fuel, the company will use less natural gas. Harmac calculates that will reduce CO2 emissions by about 4,800 tonnes per year.

In total, the government hopes that the 16 projects it plans to fund with the CleanBC industry fund will reduce GHGs by 2.5 million tonnes by 2030.

B.C. is preparing for the future with a new electric vehicles mechanics program
Dec 5, 2019 5:05 PM

CleanBC plan gets green thumbs-up from business group
Jun 23, 2019 10:35 AM
Comments
We welcome your feedback and encourage you to share your thoughts. We ask that you be respectful of others and their points of view, refrain from personal attacks and stay on topic. To learn about our commenting policies and how we moderate, please read our Community Guidelines.