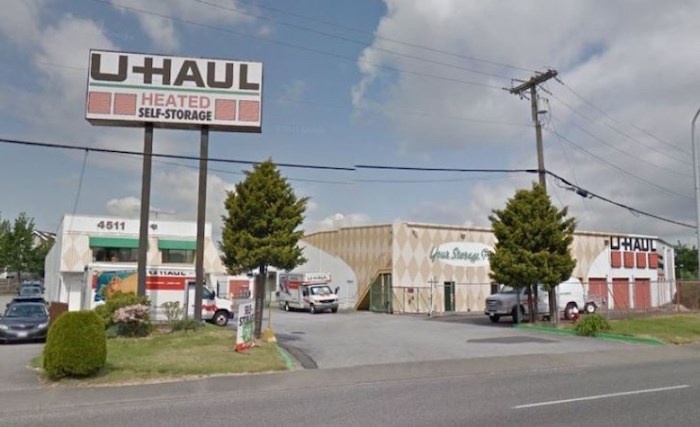 The U-Haul Moving and Storage site on Shell Road. (via Google Maps)

A couple who used to vacation in Richmond have a cautionary tale to tell, after spending more than $30,000 to store furniture in the city.

Christie and Peter Raaffa sold their Richmond condo in 2005 and then moved all their furniture – including a dining table and chairs, a couch and bed – into U-Haul Moving and Storage on Shell Road, close to Highway 99.

As far as they were aware, their belongings were safe and sound, tightly sealed in their unit, which they paid $577 rent for every three months.

But 13 years, and more than $30,000 later, the Raffas, who live in Seattle, were shocked in the spring when they came up north to give the furniture to a friend.

“We saw dead rodents on the floor and there were faeces and urine all over the dining furniture,” said Christie.

“Yet everything was in a box or sealed. The rats had gotten into the mattress as well. Everything was ruined.

“We told the manager but we were told it would be dealt with by U-Haul corporate in Toronto.

“When we called there, they asked us straight away, do we have SafeStor protection? It’s a fee above the rental. We didn’t.

“They said tough luck, basically. The issues, they said, were beyond U-Haul’s control.”

Christie claimed they subsequently found out there was a rat problem about two and a half years ago at the site, but were never told about it.

“Looking back, we maybe should have checked the unit at some point, but we assumed everything was safe,” she added.

“But we absolutely left no food or anything that would attract rodents.”

Fed up with the response from U-Haul, corporate and locally, the Raffas went to the B.C. branch of the Better Business Bureau (BBB).

However, two notices of complaint were sent by the BBB to the business, neither of which were replied to.

As such, the BBB told the Richmond News, the storage facility has been given a “D+ rating.”

Responding to complaints, added a spokesperson for the BBB, is “one of the most important factors when improving your BBB rating.”

As for the Raffas, they are writing off their losses.

“We live four hours away, so we trusted them with our stuff due to statements they make on the local website about ‘temperature controlled, safe and locked environment with cameras, extermination done regularly, protection from elements, history of excellent customer service,’” said Christie.

“Our advice would be to read the contract and ask about their extermination policy and procedures before you sign.”

U-Haul Moving and Storage in Richmond didn’t reply to the News’ requests for comment.

However, a spokesperson for the company’s corporate head office in Phoenix, AZ claimed the Raffas’ locker had wicker baskets in it with remnants of food in them.

“Food is not allowed to be stored in our lockers as this can and does attract vermin,” said the spokesperson.

“The customer had movers bring her belongings to the facility many years ago, and perhaps did not know there was food in her locker. Belongings in the locker were disposed of at the customer’s request. U-Haul reimbursed the customer two months of rent payments as a gesture of goodwill for her damaged items, though U-Haul was not at fault.”

The spokesperson further claimed that this incident was the first sign of vermin in the Richmond facility’s history, which U-Haul has operated since 2000.

“Real estate development occurring near our store has served as an instigator for stirring up pests in the area,” he added.

“In addition to the customer in question, two additional lockers were found to have food in them – those customers have been evicted. To safeguard our store, new traps were set, and continue to be set, and additional measures continue to be taken, including the re-sealing of all doors and possible entrances where vermin could find a way in.”

U-Haul, he said, “urges customers to insure the belongings that they choose to store, whether it be through our affordable SafeStor policy or their own insurance provider.

“We take every precaution to provide a clean, dry and secure facility. However, U-Haul is not responsible for damage to belongings that are being stored.”