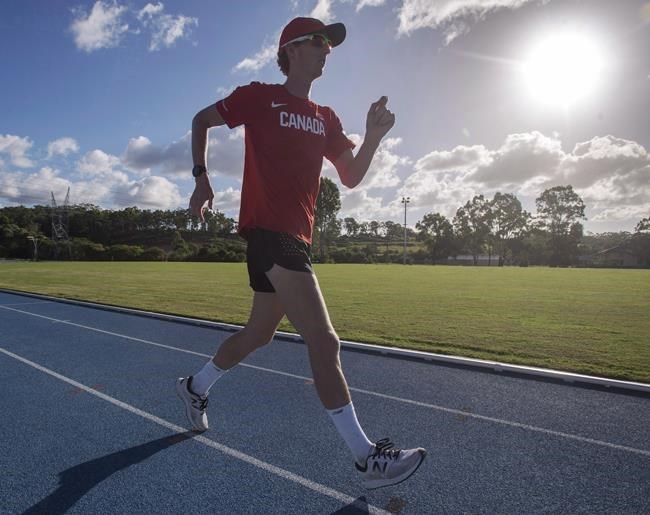 So the 28-year-old from Richmond, B.C., has spent the past 25 days walking in hopes to help other kids realize the transformative power of sport.

Dunfee, who was fourth in the 50-kilometre race walk at the 2016 Rio Olympics, has walked 25 kilometres each day for the past 25 days to raise money for KidSportBC, an organization that provides financial assistance for children's sports registration fees and equipment.

"Their mission is so simple, get more kids registered in sport, break down that financial barrier that prevents some families from putting their kids in sport, and take that pressure off them," Dunfee said. "Growing up and being transformed by sport, I think about the person I would be if I hadn't had sport. I don't know where I'd be but I'd be much worse off.

"I owe so much of who I am to the experiences I've had through sport, and the idea that opportunity doesn't exist for kids eats me up a little bit."

The fundraiser was also in celebration of KidSport's 25th anniversary. He's raised over $8,000 — enough to fund 20 kids in sports. He's also doing 25 school presentations, most of them next month, and hopes that will push him over his goal of raising $25,000.

Dunfee has completed most of the walks around Vancouver's Lower Mainland. Local runners have joined him for some. His dad accompanied him on a bike for one. For Friday's finale, he was meeting retired teammate Inaki Gomez for the final 10K which would take the two to Gomez's downtown Vancouver law office.

"Glad we get the opportunity to finish it up together," he said.

Dunfee has averaged two hours two minutes over 25 kilometres, which is quicker than he'd expected. An added benefit: he feels stronger for having completed the walks.

"I've definitely felt like I've gotten a lot fitter, despite not actively doing this as a fitness thing, I haven't really been treating this like training, I've been treating it more like exercise," he said. "But I definitely feel fitter and stronger than I did three weeks ago."

Dunfee's fourth place finish was one of Canada's biggest stories in Rio. He was upgraded to bronze after being jostled by Hirooki Arai of Japan. Arai appealed, bumping Dunfee to fourth, and the Canadian opted not to file a counter-appeal, saying in a statement: "I will never allow myself to be defined by the accolades I receive, rather the integrity I carry through life."