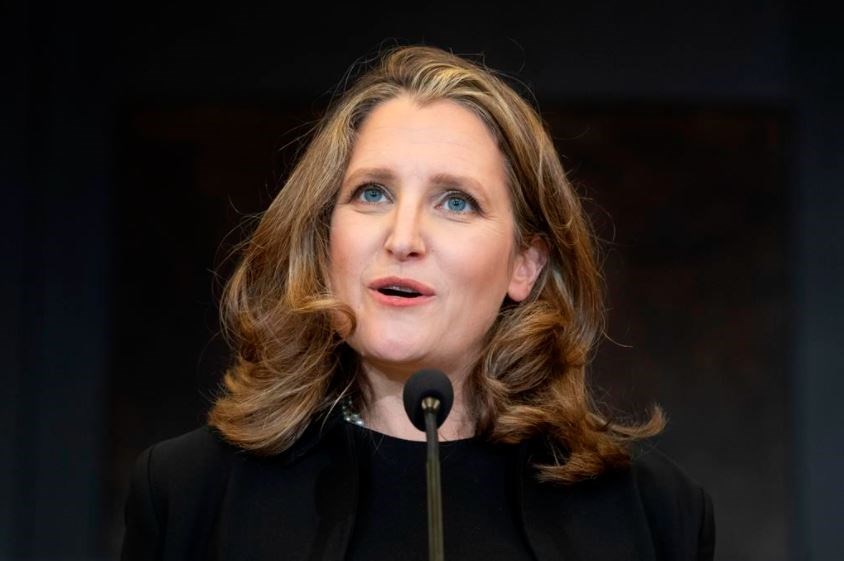 Deputy Prime Minister and Finance Minister Chrystia Freeland speaks during a news conference on parliament hill in Ottawa on Aug. 18, 2020. (via The Canadian Press)

Canadian businesses hard hit by the economic impacts COVID-19 will soon be tapping additional support from the federal government.

Finance Minister Chrystia Freeland revealed Monday (November 30) during a fiscal update in the House of Commons that the Canadian Emergency Wage Subsidy would be restored to a maximum of 75 per cent after being peeled back a few months ago.

The CEWS program originally covered up to 75 per cent on the first $58,700 an employee earns — or a maximum of $847 a week — before it was slated to decline at a staggered rate through to December.

The feds then decided to freeze the rate in October before Freeland ultimately announced in the House of Commons today that it would restored to its previous maximum, owing to a harsher business climate during the winter months.

“It's been by most measures quite a successful program to help Canadian businesses see through the challenges they've been facing.”

The measure was announced as part of the federal government’s Fall 2020 Economic Statement.

Freeland said the government will commit 3-4 per cent of GDP over three years to boost the country’s economy once the pandemic has subsided.

The cost of that spending is pegged at between $70 billion and $100 billion.

To date, the federal government has earmarked more than $320 billion in direct spending to fight the pandemic since the spring.

Details on the federal government’s plans were sparse.

The text of the Fall 2020 Economic Statement, released following Freeland’s remarks, noted that Budget 2021 would provide a plan to “provide affordable, accessible and high-quality child care from ocean to ocean to ocean.”

Beyond the child care commitment, the government said it would also provide temporary support of up to $1,200 in 2021 for each child under the age of six for families entitled to the Canada Child Benefit.

Eligible families with a net income at or below $120,000 would receive four payments of $300 over the course of the year.

The government estimates 1.6 million families qualify, for a total cost of about $2.4 billion.

As far as paying for these initiatives, about $1 billion annually is expected to come from the feds’ committing to levying the GST and HST on multinational web giants offering services within the country’s borders.

The government also aims to limit stock-option deductions within the largest of those companies.

The government said it favours a multilateral approach but that it would act unilaterally, if necessary, to apply a tax on corporations that provide digital services.

“You can’t tax your way to prosperity, so it’s good to see the government has listened to the leaders of Canada’s high-growth tech sector and understands that stock options are used for talent attraction and retention, and should be kept as competitive as possible,” Benjamin Bergen, executive director of the Council of Canadian Innovators, said in a statement.

“However, leaders of high-growth ‘scale-up’ companies in the Canadian innovation economy need clarity about how the digital service tax and new sales tax measures will impact them. We look forward to engaging with the federal government on these upcoming proposals and how they will impact domestic technology companies.”

KPMG’s Infanti said government has been talking at great length about fairness within the tax system ahead of the announced changes.

“Certainly for those types of e-commerce businesses that conduct business in Canada, they were not subjected to the GST-HST tax, so therefore no surprise that government's analysis measures and furthermore … that government has certainly seen a significant rise in retail e-commerce, and I think it’s important for them to level the playing field,” he said, referring to the economic statement’s estimate that e-commerce sales doubled at the peak of the pandemic.

Tourism, hospitality and air travel, which have all been particularly damaged by the impacts of COVID-19, will be among those businesses able to tap Ottawa’s new Highly Affected Sectors Credit Availability program.

The program offers 100 per cent government-guaranteed financing and provide low-interest loans of up to $1 million over terms of up to 10 years.

Efforts to jumpstart the economy relative to other nations around the world may be hampered by Canada’s vaccination capacity.

Freeland laid out how government had been securing a portfolio of different vaccines from seven companies, totalling 429 million doses for the country of 38 million.

Despite the large per capita offering of doses, Canada is further back in the queue of receiving those doses than other countries that had locked in deals earlier.