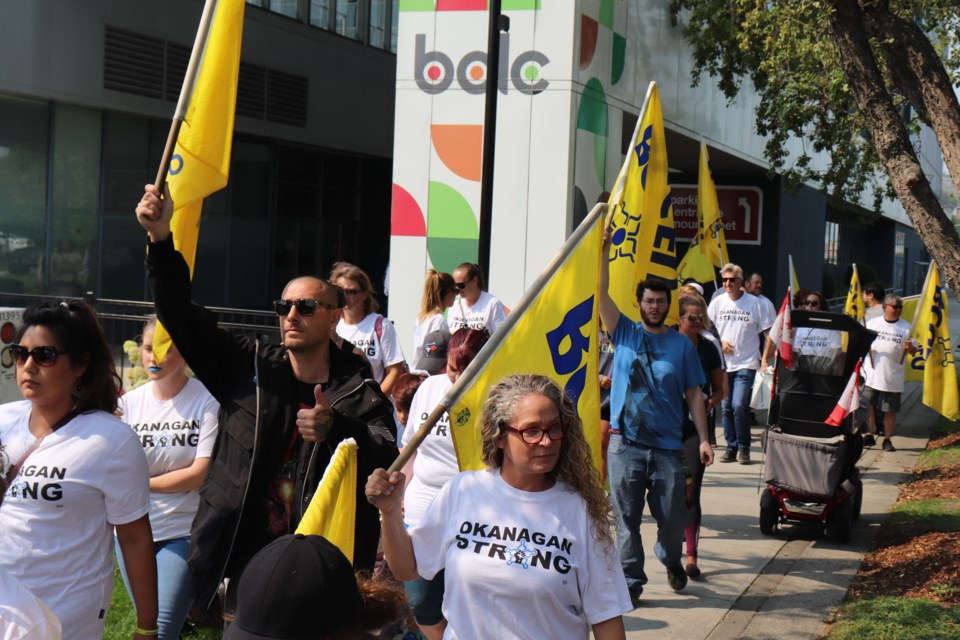 Members of the BCGEU held a rally in Kamloops in August in front of the BCLC headquarters. (via Brendan Kergin)

Gateway Casinos & Entertainment Ltd. is suing the BC Government and Service Employees Union (BCGEU) and the United Food and Commercial Workers Canada Union Local No. 401 (UFCW), claiming union members have engaged in unlawful picketing activity at the company’s Lake City casinos in the Okanagan.

The company claims union members went on strike on June 29 and maintained continuous picket lines at Gateway’s four casinos in the region. According to the claim, picketers have blocked access to its Penticton location and have engaged in “abusive and threatening behaviour of employees and members of the public.”

Union members have allegedly stood in front of vehicles coming and going from casino parking lots and shouted “sexually harassing and/or insulting slurs” at people, such as “Fuck you,” “Only pussies call the cops!” and “Retired strippers need love too!” at a female customer.

“The unlawful activities have been increasing in duration and severity since the work stoppage began, and especially since Monday, Sept. 10, 2018, when the UFCW began picketing with the BCGEU,” the claim states. “Police have been called repeatedly when vehicles have been obstructed, but have refused to intervene without an injunction.”

Gateway claims the picketers have delayed management employees from accessing the Penticton casino and created a “fear of assault and or damage to personal vehicles” and “unwarranted stress and nuisance to Gateway’s non-union employees.”

“The defendants are engaging in unlawful conduct which is substantially interfering with the plaintiff’s business operations, creating a nuisance and threatening, harassing and intimidating employees,” the claim states.

The company won an injunction against the BCGEU in August over “certain seeks the same relief for its Penticton casino. The allegations have not been tested or proven in court, and the unions had not responded to the claim by press time.

‘Unprecedented’ coalition demands end to B.C. salmon farms
Sep 25, 2020 2:05 PM
Comments
We welcome your feedback and encourage you to share your thoughts. We ask that you be respectful of others and their points of view, refrain from personal attacks and stay on topic. To learn about our commenting policies and how we moderate, please read our Community Guidelines.