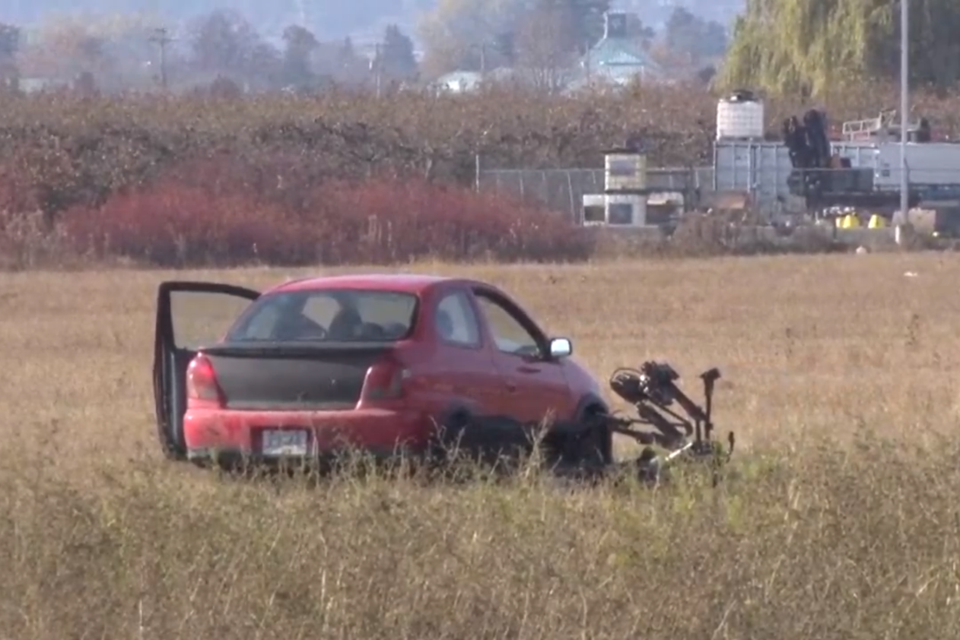 The RCMP Explosive Disposal Unit was called in after a pipe bomb was located in a vehicle stopped along Highway 97 this morning. (via Castanet/YouTube)

Kelowna RCMP have confirmed a front-line officer saw what appeared to be a home-made pipe bomb inside a vehicle he had stopped on Highway 97 early Tuesday morning.

Cpl. Meghan Foster says the officer stopped a red Toyota Echo about 3:15 a.m. on the highway near Ambrosi Street.

The driver, who was prohibited from operating a motor vehicle, was taken into custody.

“During his interaction with the driver, the officer spotted what appeared to be a home-made pipe bomb,” said Foster.

“As a precaution vehicular and pedestrian traffic in the area was diverted away from the man’s vehicle, until police could appropriately consult with the RCMP Explosive Disposal Unit in Vancouver.”

The vehicle was towed to the vacant field on Springfield Road, where members of the bomb squad safely removed, and disposed of the item.

The driver of the vehicle, a 38-year-old man out of Surrey, is expected to appear in court today.

Kamloops RCMP after two ATM thieves
Oct 29, 2019 1:58 PM
Comments
We welcome your feedback and encourage you to share your thoughts. We ask that you be respectful of others and their points of view, refrain from personal attacks and stay on topic. To learn about our commenting policies and how we moderate, please read our Community Guidelines.