Corduroy has already had its business licence suspended and been shut down by Vancouver Coastal Health
Apr 8, 2021 10:00 AM By: Brendan Kergin 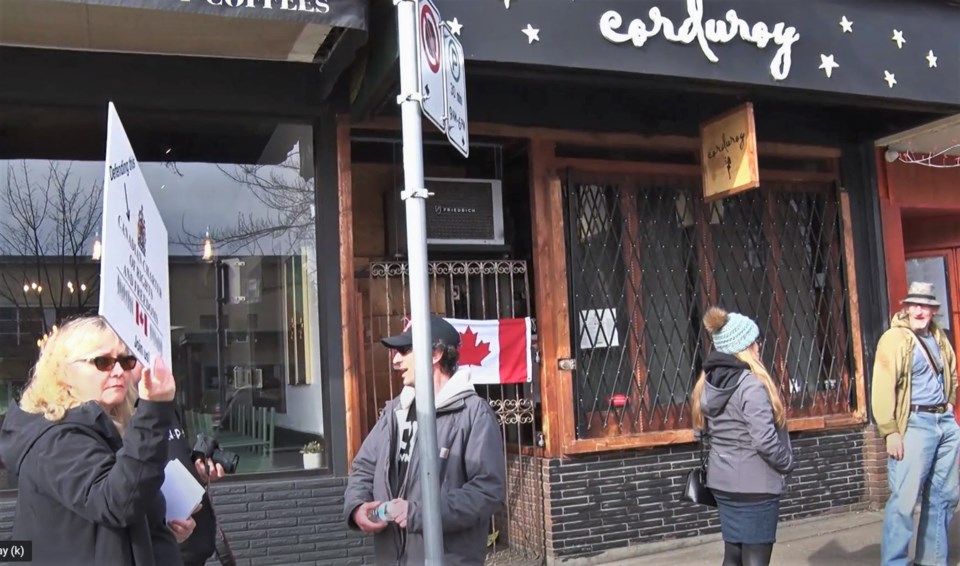 A group of supporters of Corduroy gathered in front of the restaurant Tuesday, April 6 in case it opened. It did not.Thor Diakow / Vancouver is Awesome

Corduroy, the Kitsilano restaurant under fire for opening its dining room after provincial health officials ordered all indoor dining stopped, has now had its liquor licence suspended.

This comes after the city suspended the restaurant's business licence Monday (April 5) and Vancouver Coastal Health issued an order to close for contravening the Public Health Act over the weekend. Video from the restaurant shared this weekend showed people in the crowded dining room chanting "Get out!" at a pair of health officials.

In response to the activity at Corduroy Mike Farnworth, the province's public safety minister, said there would be "consequences for those openly ignoring and defying orders are intended to keep British Columbians safe" during the COVID-19 pandemic.

"Any business or individual that openly defies a Public Health Officer order is putting the health of staff and patrons at risk," he says in the statement. "Harassment of enforcement officials will not be tolerated, and closure orders by Vancouver Coastal Health or any other authority must be respected."

A variety of authorities are monitoring the situation, according to the ministry, including Vancouver Coastal Health, the City of Vancouver and Vancouver police.

"They will take action as they see fit using the tools that have been made available to them to obtain compliance with the orders," the ministry notes in an email to Vancouver Is Awesome.

On Sunday (April 4) Corduroy announced via Instagram it would be closed Easter Sunday and Monday and would open up again Tuesday afternoon due to selling out of food, but followed up with an announcement early Monday the restaurant would remain closed for an uncertain amount of time. Management also posted "freeman" legal arguments on the door.

Tuesday still saw a group of supporters arrive at the restaurant in case it did open its doors.

Corduroy remains closed but some people showed up just in case. Was called left-wing media so I got that goin' for me, which is nice. pic.twitter.com/RRErq2pYBn

With files from Thor Diakow