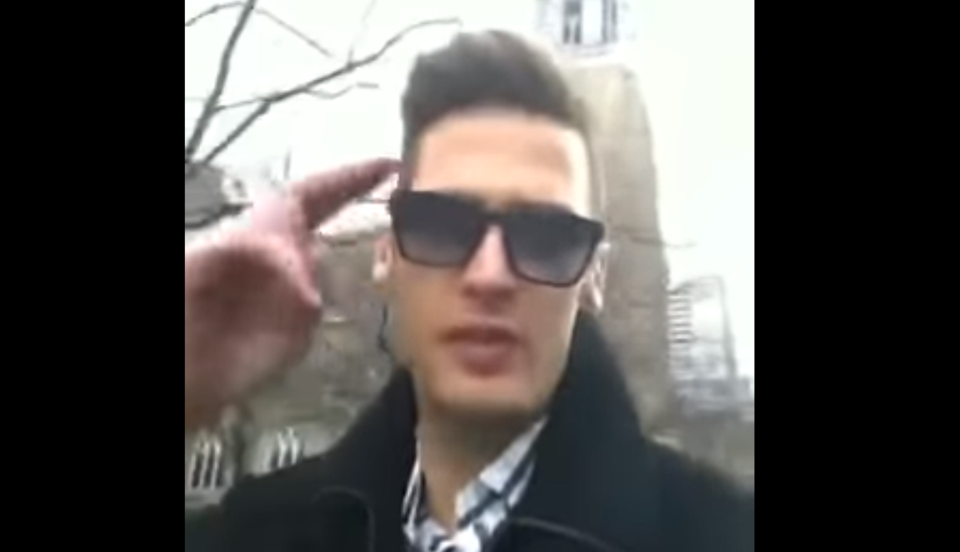 In the profanity-laden clip recorded in 2014 — the year he was elected a city councillor — Vagramov filmed himself shotgunning a beer with a homeless person outside the Granville Street SkyTrain station in downtown Vancouver. He said to the camera that he was making the video after being nominated by another person on social media to conduct a “random act of kindness.”

“I was pretty excited to get f—ed up, to be honest with you, until I realized it was a random act of kindness nomination,” he said into the camera. “So let’s see if we can’t do both and make somebody’s day.”

In the video, Vagramov asks a homeless man sitting on the sidewalk if he is hungry and the man responds, “Always.”

Vagramov then says: “On one condition, though. Do you know how to shotgun a beer?”

The two are then seen drinking beer together before Vagramov hands him some food.

The video was posted to YouTube Sept. 5 and a link was posted to a Port Moody Facebook group Tuesday. As of Wednesday morning, 1,256 people had viewed the clip.

In an interview with The Tri-City News Wednesday, the 26-year-old mayoral candidate said the video was posted when he was “fresh out of college.”

“Heart’s in the right place,” he said. “Obviously, the approach is not.”

He said he hoped the video would spur a broader discussion about homelessness and housing in the upcoming civic election.

On Monday, the day before the YouTube clip started circulating on social media, Vagramov posted a 13-minute video on Facebook of himself speaking with homeless advocate Christina Gower. At close to the three-minute mark of the video, Vagramov plays an edited version of his random acts of kindness video and talks about how his perspective has changed since the clip was filmed.

In an interview with The Tri-City News, Vagramov said it was his intent to use Monday’s video as a way showing how his perspective on the issue has changed. He denied producing the video to to preemptively deal with potential fallout from the original clip.

“I don’t know how much more responsibility I can take than putting this video out there on Monday and talking about how my perspective has changed,” he said, adding that he was unaware that the unedited version of his original video has been on YouTube since the beginning of September.

He also noted that the random acts of kindness video was on his Facebook page when he ran for council in 2014 and questioned why the clip was gaining so much attention in the current campaign.

“It wasn’t an issue in my last election. I guess it is an issue now that there is big money and development to be lost,” he said without offering proof for that claim.

Meanwhile, the video has made some of Vagramov’s supporters uncomfortable — including one high-profile backer who has now pulled his endorsement.

Rick Glumac, MLA for Port Moody-Coquitlam and a former PoMo city councillor, told The Tri-City News Wednesday afternoon he was still “thinking” about his endorsement, which he had yet to be made public, although a campaign pamphlet being mailed out by the city has Glumac supporting Vagramov for mayor.

But Wednesday evening, Glumac posted on his Twitter account and Facebook page that he was withdrawing his endorsement, saying: “A video of municipal candidate Rob Vagramov taken several years ago was shown to me recently. The content of the video was deeply offensive and inconsistent with views and values I hold about dignity and respect for all people. After taking some time to reflect on what I saw and heard, I can no longer stand by my endorsement of his candidacy.

Earlier in the day, Glumac told The Tri-City News: “My endorsement was based only on my time on council with Rob and I didn’t know anything about this video.

When asked if more should be done to vet candidates running for office, Glumac said, “I don’t know what more could have been done. It wasn’t on his page. Somebody dug that up from the past, trying to use this politically now, I think.”

Glumac also said he hopes the follow-up video posted Monday of a conversation with a psychiatric nurse about homelessness shows that Vagramov’s position has changed since his random acts of kindness challenge video was first made.

Amy Lubik, who said she considers Vagramov a friend and who is running for a seat on Port Moody council, said the original video shows a “lack of judgement” but the more recent video about homelessness shows that Vagramov is more aware of the issues around homelessness and he “does regret his actions” in the earlier video. Lubik also said she worked with Vagramov on a motion to council to make sure Riverview is included in the province’s mental health and addictions strategy.

“I appreciate that kind of leadership. Cities, being the closest level to the people, it’s important that we are in a place of advocacy.”

When asked whether, after seeing the video, she would continue to endorse Vagramov’s candidacy for mayor, Lubik took a few seconds of silent thought before stating, “Yes.”

— With files from Diane Strandberg

B.C. names all-party police reform committee to examine scope of systemic racism
Jul 8, 2020 4:04 PM
B.C. crosses 3,000 mark for COVID-19 cases; records three more deaths
Jul 8, 2020 3:55 PM
BC Prosecution Service approves three charges against RCMP officer
Jul 8, 2020 2:59 PM
Comments
We welcome your feedback and encourage you to share your thoughts. We ask that you be respectful of others and their points of view, refrain from personal attacks and stay on topic. To learn about our commenting policies and how we moderate, please read our Community Guidelines.