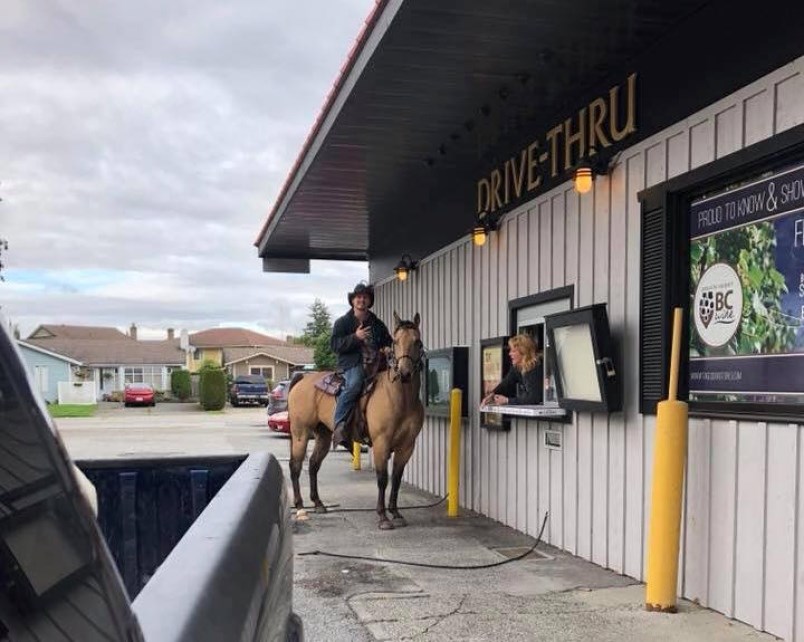 Recently a man riding a horse was spotted taking a trot through a Metro Vancouver liquor store’s drive-thru.

This may prompt a couple of questions, the first of which possibly being: “Hey, there’s a drive-thru liquor store around Vancouver?”

That’s an easy one to explain.

In Ladner, one of the communities in South Delta, there is a drive-thru window for liquor purchases (sealed and in the bottle–there is no little Big Easy near Vancity) called The Landing.

The man riding the horse is perhaps harder to explain, but the local who took the photo captioned it: ‘When people ask, “What is Ladner like?”’

To be fair, and for full disclosure, I happen to live in Ladner and have neither used the drive-thru liquor window nor ridden a horse separately or together, but I can say this does seem very Ladner.

Comments on the photo–which the Facebook poster also captioned “I hope this goes viral”–ranged from puns about Ladner being a “one-horse town,” to reported sightings of the horse and rider at other local spots like the Safeway.

To the viral point, the photo did land on Reddit, where the witty commentary and local sighting reports, continued.