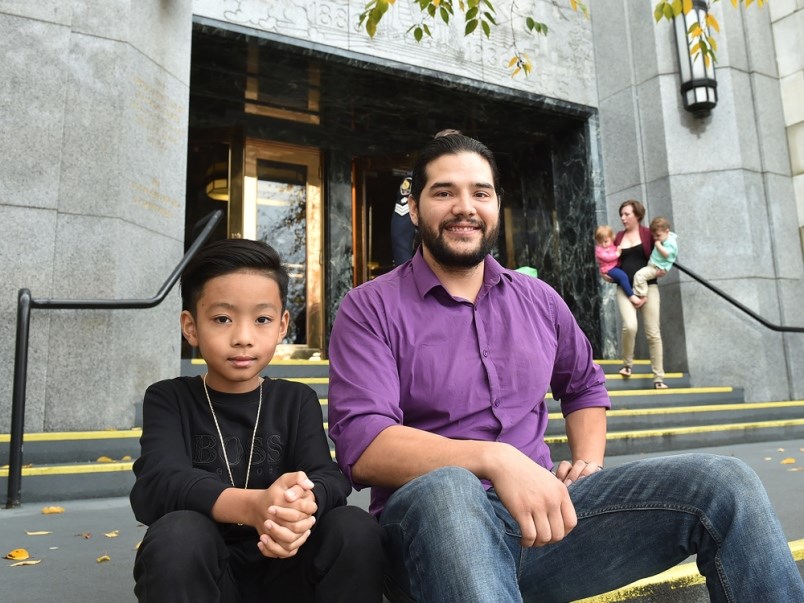 R.J. Pena and Landon Thatcher outside city hall on Friday afternoon. They were recognized for their bravery in the face of an East Vancouver house fire. (via Dan Toulgoet)

Brock Boeser and Bo Horvat have nothing on Vancouver’s newest tag team champions.

Although they’re separated in age by two decades, they became pals for the rest of time on June 23.

It was on that afternoon that Pena’s East Vancouver home caught fire and was almost immediately engulfed in smoke and flames.

Over to Pena, seven, for the play-by-play.

“I called the police and I called the ambulance,” he told the Courier Friday afternoon. “And when I smelled the smoke, I went downstairs and then I told my [grandma] to go outside. She went down the stairs, and then after she came outside. But my [grandfather] was stuck in the fire. My neighbour went inside to go get him.”

Thatcher, who lives two doors down from the home, was in his backyard painting when he noticed the flames and made his move.

A video posted to his Facebook account shortly after fire broke out shows the top level spewing smoke.

“This house is done for,” Thatcher is heard saying.

In the span of five minutes, Thatcher bolted up the back steps and followed the sounds of panic while flat on his belly.

“R.J. was screaming, saying his grandpa was in the house. I could hear him screaming,” Thatcher said. “I remember looking over in my yard and I was worried. I was terrified. I wanted to see my kids before I went in there because I thought I might not come out.”

Thatcher had to clear about 12 feet from the entranceway to locate Pena’s grandfather who doesn’t speak English and was thoroughly disoriented by the plumes of smoke. Thatcher crawled along the floor to the elderly man’s location and directed him outside to safety.

Neither man was injured.

“Within a few minutes after, the house was fully engulfed,” Thatcher said.

Thatcher and Pena were among a dozen people celebrated at city hall Oct. 26 as part of the Vancouver Fire & Rescue Services’ annual Citizen Commendation Ceremony.

Now in its fourth year, the ceremony recognizes Vancouverites who go above and beyond in myriad scenarios: on-the-spot emergencies where immediate action is needed or through more long-term efforts.

More than 100 people crammed into a room at city hall for the proceedings, including dozens of Pena’s classmates from St. Mary’s elementary school.

“For him to see that he’s so capable of doing something for other people, I think it was a confidence boost for him,” his teacher Jennifer Caldwell told the Courier. “His classmates are really proud of him right now.”

Vancouver Fire & Rescue Services’ information officer Jonathan Gormick was pretty black and white when assessing Thatcher’s actions. Simply put, had he not acted when he did, Pena’s grandfather would be dead.

And, had it not been for Pena’s quick call to 911, what is now a feel-good, Friday story would have been a tragedy four months ago.

“What prevented this from being another tragic statistic was the quick thinking of a seven year old,” Gormick said. “Instead of panicking, this young man had the clarity, calmness and courage to get one of the occupants out and to call 911.”