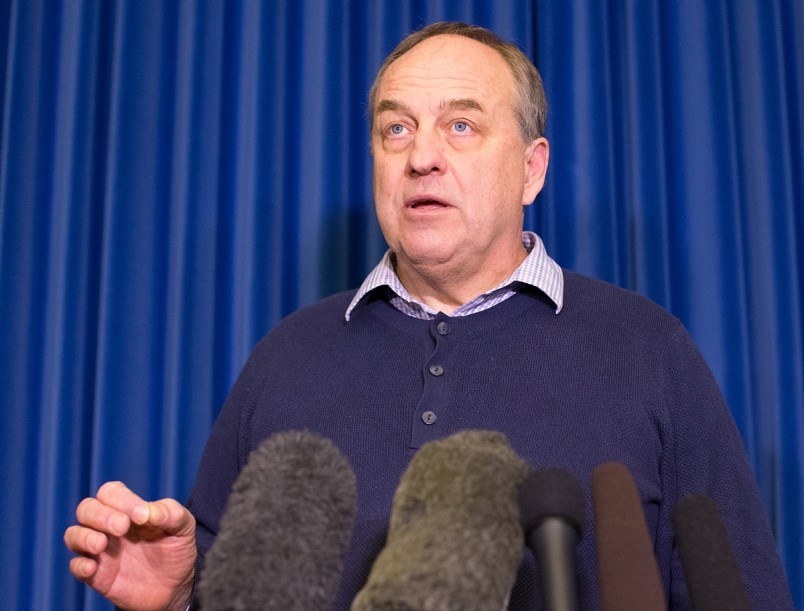 The B.C. legislature was abuzz Monday with the ramifications flowing from the green light that an international consortium is expected to give to a major new B.C. liquefied natural gas plant.

And the buzz is spreading everywhere. B.C. Liberal MLA Ellis Ross, a former Haisla chief who spent years negotiating his band’s involvement in the new industry, said people in Kitimat and Terrace are happy and optimistic about news a final investment decision is near.

LNG Canada is widely expected to commit to a $40-billion project that includes a massive new industrial plant and export terminal near Kitimat to move B.C. natural gas to Asia.

Ross said Monday he is filled with mixed emotions. “I looked at the first LNG idea in 2004. I looked at small ones and large ones, I watched Petronas [a rival LNG proposal that bowed out last year].”

He said there’s relief LNG Canada is as close as it is now, “but we still have some tough issues to tackle.”

There’s a blockade of the gas pipeline route by one of the few First Nations that doesn’t support the project, and there are still some other local holdouts.

But the widespread Indigenous support from Prince George to Kitimat shows the value of working consultation and pre-consultation deeply into such projects, he said.

Another issue Ross cited is the need for the Kitimat-Terrace region to brace itself.

A huge aluminum-smelter upgrade that coincided with major groundwork on the LNG plant energized the region a few years ago. But Ross said experienced people told him: “That was a mini-boom, that wasn’t a real boom.”

“When you see the final investment decision, you’re going to see an incredible boom. I’d like to shift the focus to getting ready for that impact.”

The legislature is also readying for the impact. Bills are expected this fall following the company’s commitment. They would reflect changes the NDP made to entice the company to build.

The wild card is the fact that the B.C. Green Party won’t vote for any of it.

“Legislation that would enable a final investment decision is not legislation that will be supported by the B.C. Green Party,” he told reporters. “The NDP will have to find support from B.C. Liberals. ”

Weaver met Environment Minister George Heyman Monday on one critical aspect — the NDP’s climate-action plan. It sets a hard target for reducing provincewide emissions over the next 11 years, but an LNG plant would significantly increase them.

The information everyone is waiting for is how a big new greenhouse-gas emitter can be welcomed to a province that is legislating a 40 per cent cut in emissions. It would require sharper reductions in other sectors to make room for the plant.

Weaver said: “It’s very challenging to do this. It’s the NDP’s to meet.”

Meanwhile, the B.C. Liberals spent Monday sniping at the NDP on social media for all its past opposition to Liberal efforts to land a plant.

B.C. Liberal Leader Andrew Wilkinson said his MLAs still support development of the industry, but won’t be “patsies” for the NDP on any and all moves the government makes.

One of the factors for investors is an unstable minority government in which one coalition member is an anti-industry party, said Wilkinson.

So LNG Canada likely has some firm indication the bills to cement B.C.’s offer are going to pass.

Energy Minister Michelle Mungall, a vocal critic of the Liberal attempts to develop the industry, touted the huge tax revenue and job figures and said it will be historic for Canada.

“Under the B.C. Liberals, it just didn’t happen. They put a lot of effort into it, but it didn’t yield any results.”

Wilkinson said the NDP was playing petty politics with the good news. There’ll be a few more rounds of that game this fall.