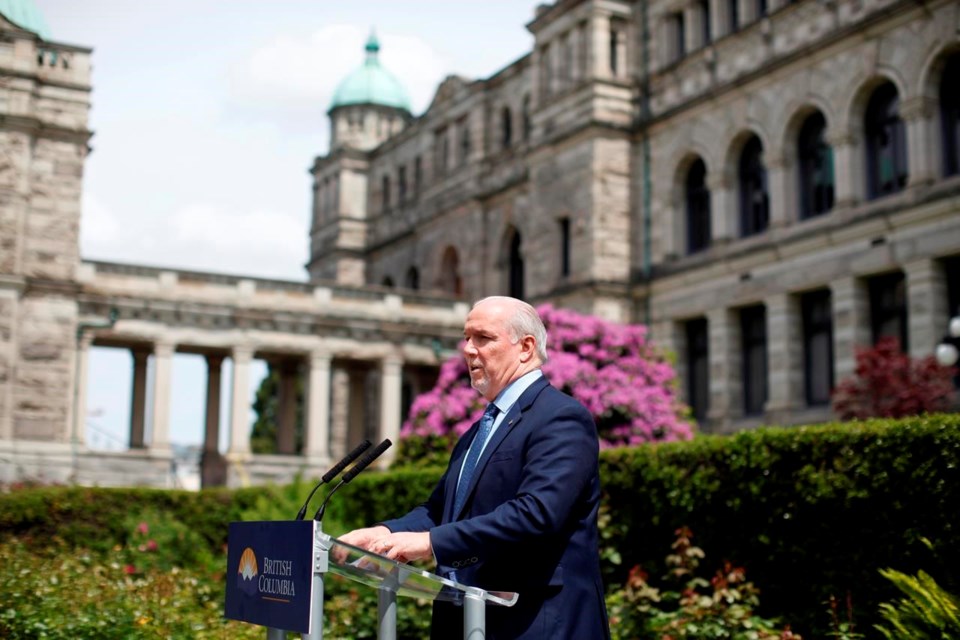 VICTORIA — It will likely be next week before British Columbia further eases restrictions in place to fight COVID-19, Premier John Horgan says.

He said Wednesday he's waiting for modelling numbers next week updating the status of COVID-19 infections before announcing whether the province is ready to move to the next phase of its restart plan.

"I'm hopeful at that time we can move to full implementation of phase three of the recovery plan, which would include more travel throughout B.C.," Horgan said at a news conference.

Henry said earlier this week she is pleased with the results of B.C.'s reopening for schools and some businesses, including restaurants, hair salons, dentist offices and physiotherapy clinics. Schools have been open on reduced schedules for students since June 1 and the salons, restaurants and clinics reopened on May 19

B.C. announced 19 new cases of COVID-19 Wednesday, bringing the total to 2,775. The death toll remained at 168 and 2,422 people who tested positive for the virus have recovered.

Horgan also announced several online participation platforms, including surveys and virtual town hall meetings, to encourage people to have their say on the province's recovery plans.

He said the six-week survey period will allow people to share their ideas, experiences and priorities.

"Everyone says, 'How can I help?' I want to take advantage of that," said Horgan. "Our success has been a result of people coming together, recognizing that regardless of where we live, regardless of our economic status, people had to take COVID-19 on together as individuals, as a community and as a province."

The province announced a $5 billion pandemic plan in March, which included $1.5 billion for recovery efforts.

Horgan said the survey period does not stall current plans and initiatives to spur economic recovery.

"Absolutely, not slowing down anything," he said. "We're inviting British Columbians to tell us what they think."

Finance Minister Carole James said COVID-19 has battered the B.C. economy and recovery will be difficult.

"Rebuilding our economy is going to be a massive job, but we are starting from a place of strength with a great many advantages," she said.

James said the province must rely and build on its strengths of research, innovation, entrepreneurship and its natural environment and resources to come back from the pandemic.

"We haven't lost those inherent strengths in our province and through this recovery we have the opportunities to build on them," she said.

The B.C. Liberals said the government needs to take more decisive action than inviting people to participate in a survey on restarting the economy.

"People are still out of work, businesses are facing bankruptcy, the public health threat from COVID-19 isn't over, and what does the NDP do? They launch an online survey," Liberal leader Andrew Wilkinson said in a news release.

"This shows the NDP don't have any plan at all."

This report by The Canadian Press was first published June 17, 2020.