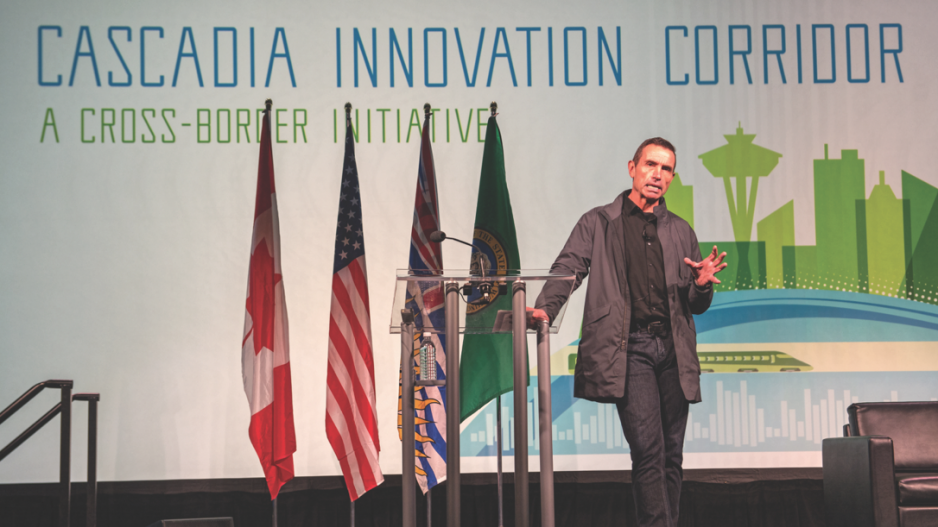 MEC CEO David Labistour during his presentation at the Cascadia Innovation Corridor Conference. (via Chung Chow)

Ongoing efforts to thin the border and fatten up business connections between B.C. and Washington state might be likened to a spotty Wi-Fi router that keeps getting the home fix-it treatment: pull the plug, plug it back in and hope it keeps chugging along.

“I would have said last year that people thought this was an interesting idea but didn’t really know what it was going to be,” said the CEO of the Business Council of BC (BCBC), whose organization has been among those spearheading recent initiatives to bolster economic and academic links between Vancouver and Seattle.

“Cascadia’s been a noun and now it’s a verb.”

Business, political and academic leaders descended on Vancouver October 9-10 for the third annual Cascadia conference (Seattle played host last year), where experts spoke about the challenges and opportunities awaiting cities grappling with affordability issues while trying to shepherd their workforces into a rapidly evolving knowledge-based economy.

The ultimate goal is to turn the Cascadia region into a more integrated economic powerhouse, albeit one that still faces an international border and other headwinds.

A high-speed rail line, access to Nexus cards, demand for venture capital and, of course, a potential National Hockey League rivalry were all on the agenda.

The concept was taking hold back then, but more of the tangibles have been manifesting in 2018.

In July the B.C. government, along with Microsoft Corp. and the transportation departments of Washington state and Oregon, committed US$1.5 million toward a business case study for a high-speed rail line connecting major cities in the region.

“One of the things we suffer from in Canada, frankly, is we like to be all things to all people,” D’Avignon said. “We’ve said, ‘You know what? “If we’re really honest with ourselves we’re good at four things here. Let’s go and be purposeful about those four things.’”

North Carolina, which was once facing its own erosion of talent, moved forward with a regional initiative that now encompasses three research universities in the form of Research Triangle Park.

Touching on the need for legitimate buy-in from universities and government, as well as adequate funding and an effective strategy, Hayes also emphasized the importance of leadership.

“You need to have a leader of an organization. This is not going to be successful if it’s run by committee,” he said. “Somebody needs to be in charge, and this leader needs to be agnostic concerning the other players.”

D’Avignon said the newly launched Cascadia steering committee is just one of the first phases in driving more regional partnerships and, for now, he wants to ensure the committee’s co-chairs are not micromanaged.

“I would expect at some point there’s going to be an organization that drives this going forward,” D’Avignon said.

“The co-chairs are leaders in their own right, and so they’re going to inform what are the structures, and what are the supports and what do we need … to really make this thing successful and to take flight.”

The BCBC delivered its own report on the untapped economic potential of a tighter Cascadia, noting B.C.’s $6.5 billion in exports to Washington are more than double its exports to California.

“Geography is an important factor in the distribution of exports across the states, but considering California’s population (almost 40 million) is more than five times larger than Washington’s (7.4 million) policy-makers should pay attention to the importance of trade between these contiguous cross-border jurisdictions,” author Ken Peacock, the BCBC’s chief economist, stated in the report.

Peacock also concluded that if the province were an independent country it would be Washington state’s third-largest market after China and Japan.

Meanwhile, urban studies theorist Richard Florida told the conference that for a new knowledge-based economy to be a success, Vancouver and Seattle must be cognizant of what he described as the evisceration of the middle class.

He cautioned that society is becoming increasingly split between affluent and lower-income groups.

And those cleavages are at risk of widening further without access to affordable housing in Vancouver and Seattle, according to Florida.

“The challenge ahead is to build an innovation corridor of inclusion and equity,” he said.

“This isn’t an argument about handouts.… Our objective is to extend the innovation economy.”