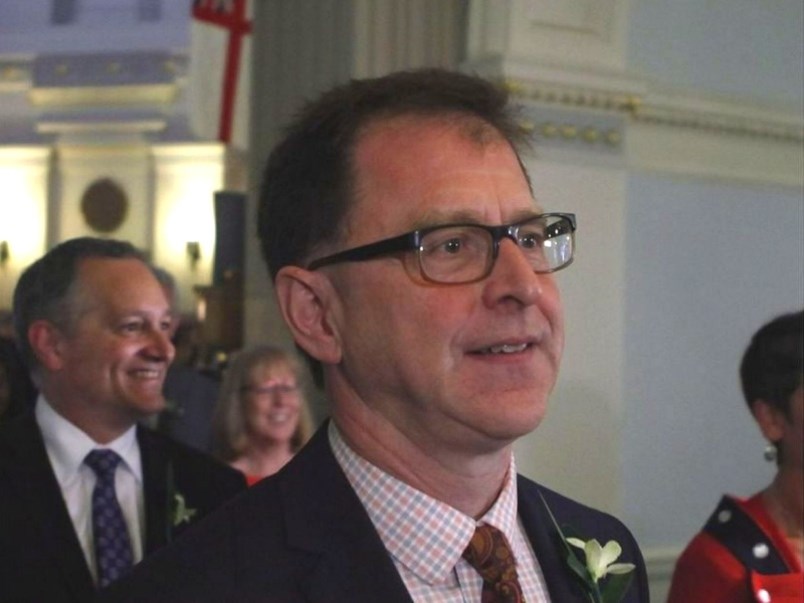 B.C. Health Minister Adrian Dix introduced legislation on Thursday that would ban Liberal-era practices at seniors care homes and other care facilities. (via The Canadian Press)

Laws that allowed health sector contracts to be ripped up and flipped and staff fired en masse only to be hired back at lower wages could soon be repealed.

B.C. Health Minister Adrian Dix introduced legislation on Thursday that would ban these practices at seniors care homes and other care facilities.

“This is a day health-care workers have been waiting for for 16 years,” said Jennifer Whiteside, HEU secretary-business manager.

The proposed health sector statutes repeal act would rescind in their entirety: The Health and Social Services Delivery Improvement Act, commonly known as Bill 29, introduced in 2002, and the Health Sector Partnerships Agreement Act, known as Bill 94, introduced the following year.

The acts led to the layoff of more than 8,000 health-care workers, mostly women, since 2002 and denied them rights available to all other workers in B.C. under the Labour Code.

“Bill 29 was an abuse of power by the B.C. Liberals that was a targeted attack on the jobs and livelihoods of tens of thousands of mostly women health care workers,” said Irene Lanzinger, president of the B.C. Federation of Labour.

Repealing the legislation “will end rampant contract-flipping in health care, and make for more stable care-especially for seniors,” said Lanzinger.

The bills introduced by the Liberals under then-premier Gordon Campbell stripped affected employees of the workplace protections and rights available to other workers in B.C.

Bill 94 was enacted with the intention of facilitating public-private partnerships in the health sector.

As just one example, in September 2016, about 140 care aides, nurses, cleaners, recreation aides, dietary staff, and maintenance workers at Wexford Creek care home in Nanaimo were laid off and their work contracted out to Care Corp after the home was sold to Park Place Seniors Living.

Whiteside said the statutes fragmented health care delivery, broke long-term relationships between health care workers and clients, and led to lower wages, mostly for women who comprised most of the workers in these fields.

“Repealing these laws is a giant step towards restoring justice and fairness for health care workers and repairing the damage that’s been done to health care delivery,” said Whiteside.

In 2007, the Supreme Court of Canada ruled that the collective bargaining process was protected by the Canadian Charter of Rights and Freedoms and that provisions in Bill 29 constituted a significant interference with the right to bargain collectively and violated the charter. In 2008, some provisions in both Bills 29 and 94 were repealed, but others remained, including those denying workers successorship and some employer protections.

“With an aging population, now is the time to inspire a new generation of health-sector workers and we need to attract more care aides, community health and hospital workers throughout the province,” said Dix, in a news release.

The proposed legislation to repeal the statutes will come into effect through regulation in 2019.

The province said it consult with unions, stakeholders and for-profit, not-for-profit and non-denominational employers to implement the repeal in a way that strengthens the publicly funded health-care system.