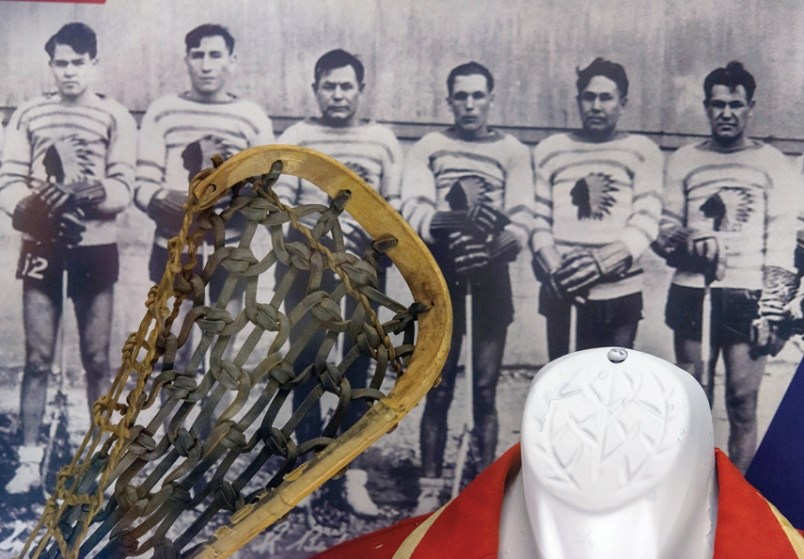 Squamish Nation member Tewanee Joseph is unequivocal in his assessment of the role sport has played in his life.

“It really did save my life,” he says. “It was tough growing up for me personally. I faced a lot of different examples of racism and people just not being educated or knowing about our culture, and for me sport was always the place that I always went to. ... No matter how times were tough, I could go and play lacrosse or play soccer and actually be on the floor with people from different places and different cultures and we all had the same objective, same goal.”

Joseph is now thrilled to be a part of a new initiative that will honour the past and look to the future in celebrating and recognizing Indigenous and First Nations athletes who have made an impact on British Columbia’s sports history. Last week the BC Sports Hall of Fame opened their new Indigenous Sport Gallery, a permanent installment that spans more than 1,000 square feet and features 16 display cases on topics ranging from traditional Indigenous games to First Nations members inducted into the Hall of Fame to the work of the Four Host Nations during the 2010 Winter Olympic Games.

There’s a strong North Shore presence in the gallery, including the storied history of the North Shore Indians lacrosse team. The 1936 North Shore Indians team, guided by legendary coach and manager Andy Paull, was inducted into the BC Sports Hall of Fame in 1999, honoured for being British Columbia’s “most exciting team” and credited with drawing attention to the sport of box lacrosse in the province.

The club is still royalty for many First Nations people on the North Shore, says Joseph.

“The North Shore Indians, we’ve had such a storied history here with the lacrosse. To have them represented in the Hall in an Indigenous Sport Gallery was just overwhelming to see that.”

Joseph, who had relatives on that 1936 team that made it all the way to the Mann Cup national championship final, followed in those same footsteps when he was growing up.

“I love lacrosse. Every Friday night I’d go out to the games and watch the North Shore Indians. That was what we did, me and my friends, and that was what we dreamed of being: North Shore Indians,” he says. “My late grand-uncle, Stan Joseph Sr., he’s in the Lacrosse Hall of Fame. He used to go run laps and we’d be in there as kids playing in the box, we’d gear up with what little gear we had and play lacrosse for all hours of the day. I spent a lot of time in that box.”

The dream eventually came true for Joseph, as he suited up for the North Shore Indians and helped the team win two President’s Cups, the trophy awarded to the Canadian Lacrosse Association’s senior B national champion.

Joseph – who grew up on North Vancouver’s Capilano Reserve, lived for a spell in Vancouver’s Downtown Eastside, and now resides in North Van’s Mission Reserve – can’t say enough about the role sport played in his life.

Squamish Nation’s Tewanee Joseph is recognized in the new gallery for his leadership role with the Four Host Nations during the 2010 Olympics. (via BC Sports Hall of Fame)

“I think what I learned out of all that was if you do set goals and you do put the work in and the practice in you can be successful,” he says. “I translated that into my own personal life and business, it really did save my life that way. I don’t know where I would have ended up if I hadn’t played lacrosse and sports. It got pretty tough growing up in school and other places as well. But at the same time maybe I wasn’t as proud as I should have been growing up, but through sport I learned that this is an Indigenous sport, lacrosse, and it’s our culture and it just instilled the pride in me and the confidence to be able to do other things.”

That passion for sport pushed Joseph to great things. He’s now a trustee for the BC Sports Hall of Fame and was the executive director and CEO of the Four Host First Nations for the 2010 Olympic and Paralympic Games. That group’s work led to an unprecedented level of involvement from Indigenous groups in the hosting of an Olympic Games.

“(That’s) the first time that there were partnerships between Indigenous people and the International Olympic Committee, … it was something that I never thought I would see in my life.” For his involvement with the 2010 Games, Joseph earned himself a display in the new Indigenous Sport Gallery.

“It was a little bit overwhelming for me to see,” he says about the first time he saw the display. “Seven years of my life were spent on those Games.”

Other North Shore links in the new gallery include an exhibit about the boxing program at North Vancouver’s St. Paul’s Indian Residential School, where Alex Strain founded the famed Buckskin Boy boxing competitions for First Nations boxers. Canoe pulling is also recognized in the gallery, the display highlighted by a six-foot model of a canoe.

The new gallery gives Joseph great hope that real change is occurring in this age of Truth and Reconciliation.

“This is really one of those moments that we can point to under Truth and Reconciliation in the 21st century. Here’s a living, tangible example of what’s possible,” he says. “I think Vancouver is really a special place because of not only the Olympics but also what’s been happening since. This is one of those reconciliation moments and action moments that we can point to and show that something is possible. … You should not dream too short, we should dream big.”

Joseph is hoping that the gallery will serve as an inspiration for a new generation of Indigenous athletes.

“To have a dedicated Indigenous space is something that is going to have long-lasting repercussions on our young ones,” he says. “For young athletes I believe that it will help change attitudes and also create a conversation amongst each other.

“Rather than thinking that there’s limitation on what you can do as an athlete, (thinking) that there are no limitations. If we’re featuring all these different sports, it doesn’t matter what sport you come from, if you put your all into it and your passion into it and you really want to work the hardest you can, you can achieve greatness. That’s what I hope this gallery does.”