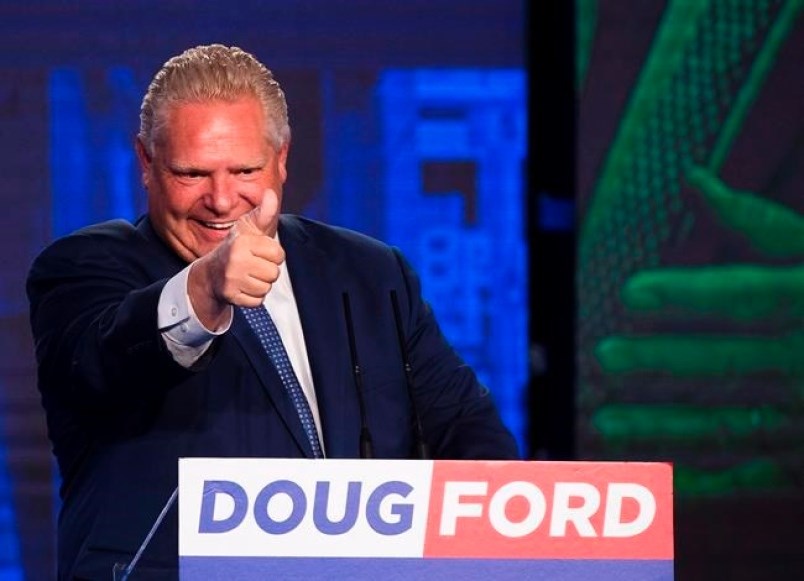 Profound implications for the relationship between the federal government and some of its provincial counterparts could be in the offing after recent behaviour from Ontario Premier Doug Ford. (via Nathan Denette, The Canadian Press)

The recent threat by Ontario Premier Doug Ford to invoke the notwithstanding clause of the constitution may have signalled that provincial governments – some anyway – may be prepared to take extraordinary moves to get their way.

If true, that has potentially profound implications for the relationship between the federal government and some of its provincial counterparts, and with it a weakening of federalism.

The issues that mostly divide Ottawa and some provinces revolve around the broader issue of energy, such as pipelines and climate change.

For example, the Trudeau government is intent on implementing a climate action plan to fight global warming. This will likely include a national carbon tax.

Yet, the provincial governments of Ontario and Saskatchewan have served notice they intend to fight such a tax with every tool in their arsenal, including legal challenges.

Then there is Jason Kenney, the leader of Alberta’s United Conservatives. Unless NDP Premier Rachel Notley can pull a rabbit out of a hat or oil well, the odds greatly favour Kenney winning next year’s election in that province and becoming the Alberta premier.

In any event, it should also be noted that Notley has pulled Alberta out of participating in any federal climate plan in response to the Trudeau government’s inability to get the Trans Mountain pipeline expansion project actually built.

The B.C. NDP government is actively trying to do whatever it can to block that pipeline, although I wouldn’t put Premier John Horgan in the same category as Ford, Saskatchewan Premier Scott Moe and Kenney when it comes to being obstructionist to some of the Trudeau government’s policies.

As I’ve pointed out before, Horgan needs Ottawa’s funding to help deliver on promises to build transit projects and to help address the housing crisis. Aside from their differences over the pipeline, Horgan and Trudeau appear to have a fairly strong working relationship.

Plus, B.C. already has its own carbon tax, and while the NDP government has dropped the concept that the tax was revenue neutral, it still backs such a tax.

I suppose things could still become quite strained should construction of the pipeline actually begin, but I’ve always thought Horgan has placed infrastructure dollars higher on his priority list than a never-say-die opposition to the pipeline project.

Still, the prospect of three of the four provinces that lie between B.C. and the federal government being prepared to take on new levels of animosity to Ottawa may upset the provincial-federal apple cart, and that can have some blow back on this province.

For example, all provinces would love Ottawa to boost its share of health-care funding. The health-care system has become increasingly expensive (spending in this province is projected to be $2.3 billion higher in 2020-21 than it was last year).

The provinces have been pressing the Trudeau government to come up a new health-care funding accord, as the Harper government let the last one lapse. The provinces do not like tying federal funding to the country’s annual rate of economic growth, as the dollars under that formula are not enough.

However, a deterioration of federal-provincial relations may affect Ottawa’s decision-making and timelines on issues such as health spending. Over time, the list could be a long one.

Ford ultimately never invoked the rarely used notwithstanding clause, but he seems capable of being quite willing to invoke it on other issues. And Kenney seems more than willing to take the same kind of action to get what he wants.

Both leaders possess a wide streak of right-wing populism (and Moe is not far behind) that will undoubtedly lead to a clash with not only the Trudeau government, but potentially with the courts as well.

We may be headed to a situation similar to when the federal government had to square off against the likes of former Alberta premier Peter Lougheed over a national energy policy, and against former Quebec premier Rene Levesque on Quebec independence.

The next few years promise to be lively times when it comes to some provinces squaring off against Ottawa. Hopefully, B.C. does not get caught in the crosshairs of this looming battle.

Keith Baldrey is chief political correspondent for Global BC. Keith.Baldrey@globalnews.ca