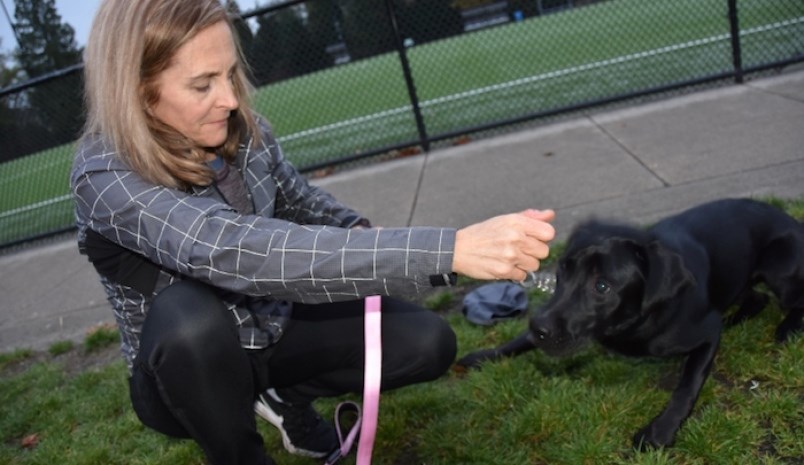 Coquitlam resident Dina Howell with Rosie near the location at Dr. Charles Best field where she suspects her eight-year-old Labrador ingested marijuana. (via Grant Granger/Tri-City News)

Dina Howell found that out the hard way last weekend — and so have many other Metro Vancouver residents in recent years - including a recent case involving a New Westminster dog owner.

Howell had Rosie, her eight-month-old black Labrador, on a leash while she was watching her daughter’s soccer game at the field at Dr. Charles Best Secondary School when she noticed Rosie licking something off the ground, but didn’t think much of it.

“The only problem with labs is they eat everything that smells good,” said the Coquitlam resident. “Dogs are quick to pick up anything.”

When they returned home, Rosie started looking “super sleepy,” said Howell, who assumed her puppy was tired because they had taken a two-hour walk that morning.

Rosie was oblivious to anything and anybody for about an hour and, when the pooch woke up, Howell noticed Rosie had urinated on herself, something the puppy hadn’t done in months. When Rosie tried to stand up, she fell over.

“She was hiding from us, she wouldn’t come near us for a while,” said Howell. “It was scary to see a puppy like that.”

Howell was particularly concerned because she’d had a previous 14-year-old lab put down because of a stroke when the animal exhibited similar symptoms.

After consulting her regular vet clinic and a veterinarian friend by phone, she took Rosie to the Central Emergency Clinic on Roderick Avenue in Coquitlam.

To her surprise, the vet said to Howell, “’I suspect it’s marijuana poisoning. I’m pretty sure it is. We have lots of dogs with this.’”

Testing confirmed the diagnosis and Rosie was given intravenous fluids and kept overnight, at a cost of more than $800. By the time Howell picked up Rosie Monday morning, the puppy was fine.

Central veterinarian Peter Bassi said the clinic gets two or three such cases a week, sometimes more. In fact, on the night of Rosie’s stay, there was another case in the clinic.

“It’s not always the ingestion of the marijuana, it’s the smoking in the environment. Second-hand smoke can make them fairly high,” said Bassi.

He cited an incident where the owners smoked pot in their basement suite while the dog was outside on the porch inhaling the rising fumes.

“The dog was fairly high and they were surprised it was the same marijuana fumes that they had inhaled,” said Bassi.

He noted the keen sense of smell dogs have can often get them in trouble, especially when out for walks in areas where kids are known to sneak a toke.

“They get attracted to this very easily because it’s a different smell to them, and they get their nose down and all of a sudden they get high on their own,” said Bassi. “It could be fatal if the ingestion is more than what they can handle because they don’t know how much to eat or not to eat.”

Before cannabis was legalized last month, he said, pet owners were “very protective” when presented with the diagnosis of marijuana poisoning, saying they didn’t know how their pet ingested it. But Bassi also said it is quite common for pets to get poisoned while out for a walk.

“We always tell people if you live in an area for a few months, you get a feel for where the kids hang out and go to smoke, and try not to take your dog in that area because there are tons of other places that are considered clean and people don’t smoke in that area,” said Bassi.

He also advised walking dogs in the daytime so owners can see if their pet ingests something.

According to the website petpoisonhelpline.com, “clinical signs (of marijuana poisoning) can be seen within minutes to hours depending on how the pet was exposed (inhalation versus ingestion). Classic signs of poisoning include a dazed expression, glassy eyes, incoordination, slow response times, and dribbling urine. Vomiting and drooling are also common, despite marijuana’s anti-nausea effects. Other signs include changes in heart rate, vocalization, neurological stimulation, hyperactivity, or coma.”