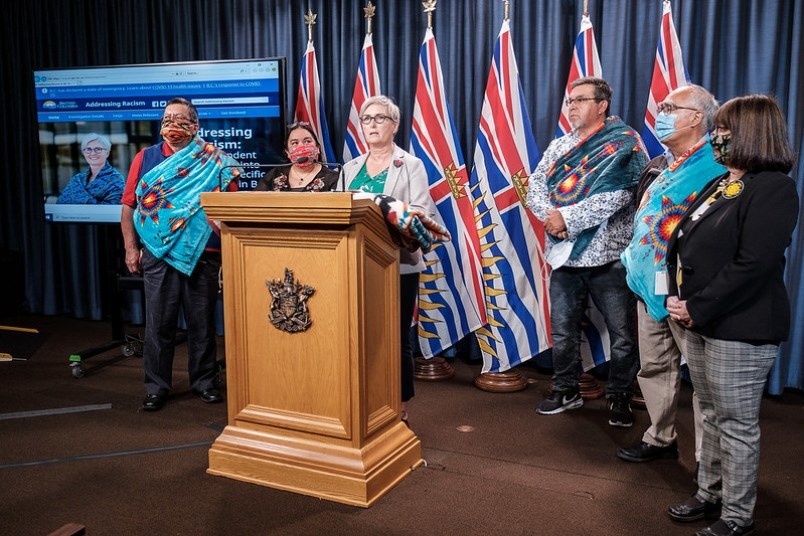 Mary Ellen Turpel-Lafond says B.C.'s health-care system includes wides-spread racism against Indigenous peoples following an investigation that launched in June 2020 based on allegations of a 'Price Is Right' game. Photo taken in June 2020. (via Flickr/Province of B.C.)

A report into systemic racism against Indigenous people in B.C.’s health care system found hundreds of examples of racism, prejudice and profiling throughout the entire health system, which results in poorer health outcomes for First Nations and Métis people.

“We have a significant problem that must be urgently addressed,” said Mary-Ellen Turpel-Lafond, B.C’s former child and youth watchdog and a retired judge, who was tasked by Health Minister Adrian Dix in June to investigate allegations that health care professionals played a “game” to guess Indigenous patients’ blood alcohol levels.

While the investigation found no evidence to substantiate the allegations that a 'Price is Right-style' game actually occurred, it did find clear evidence of a more “widespread and insidious problem,” including systemic racism and a lack of cultural safety for Indigenous people seeking health care.

Turpel-Lafond found anecdotal reports that resemble the game allegations but she said “none could be described as prevalent, widespread or targeting only Indigenous patients.”

She said, if the game did happen in the past, there’s no evidence it is occurring today.

She said medical professionals sometimes estimate a patient’s blood alcohol level, which is routine and clinically appropriate, and her review did not find that Indigenous patients were profiled based on stereotypes about addictions.

About 600 people called or emailed the tip line set up to obtain information.

One elder vividly described feeling the “angry hands” of health care workers over her lifetime, according to the report.

Another respondent said: “I am afraid to go to any hospital. When I do have to, I dress up like I’m going to church [in order to receive proper treatment]. It’s ridiculous.”

Another person said: “I avoid the hospital at all costs because as an Indigenous person I feel unsafe and feel like they won’t bother treating me.”

Public health emergencies such as the COVID-19 pandemic and the opioid crisis are magnifying systemic racism and disproportionately impacting Indigenous peoples, the report found.

The review also analyzed 430 complaints from patient care quality offices, Colleges regulating medical professionals and to the First Nations Health Authority. It also looked at 185,000 pieces of data outlining how First Nations and Métis people use the health care system and their health outcomes.

The report found that Indigenous women and girls are seriously disproportionately impacted.

Turpel-Lafond said evidence of systemic racism doesn’t mean every Indigenous person who gets health care will experience direct or indirect racism, but they could experience it anywhere in the system.

She found that racism persists because employees are not willing to speak up and there’s a lack of accountability by leadership to stop discriminatory behaviour.

The report, called In Plain Sight: Addressing Indigenous-specific racism and discrimination in B.C. health care, makes 23 recommendations, including improving accountability by creating a system-wide process for monitoring reported racist incidents and improving the complaints process. Turpel-Lafond wants B.C.’s whistleblower legislation, the Public Interest Disclosure Act, to apply to health care workers in order to create a “speak up culture” where people no longer fear speaking out about racism.

Daniel Fontaine, CEO of the Métis Nation B.C., told the Times Colonist in June he was made aware of allegations that emergency-room physicians, nurses and other staff regularly tried to guess the blood-alcohol level of Indigenous patients.

Fontaine said the allegations were made by a health-care worker who was participating in San’yas Indigenous cultural safety training, an online program aimed at building positive partnerships between service providers and Indigenous people. That information was brought to the First Nations Health Authority, which alerted the Health Ministry, prompting Health Minister Adrian Dix to appoint Turpel-Lafond to conduct an investigation.

Turpel-Lafond said less than one per cent of health care workers take the San’yas Indigenous cultural safety training, which is not mandatory.

She said she found inadequacies with the program and would like it to include more clinical training on how to better incorporate Indigenous health practices and knowledge into the health care system.