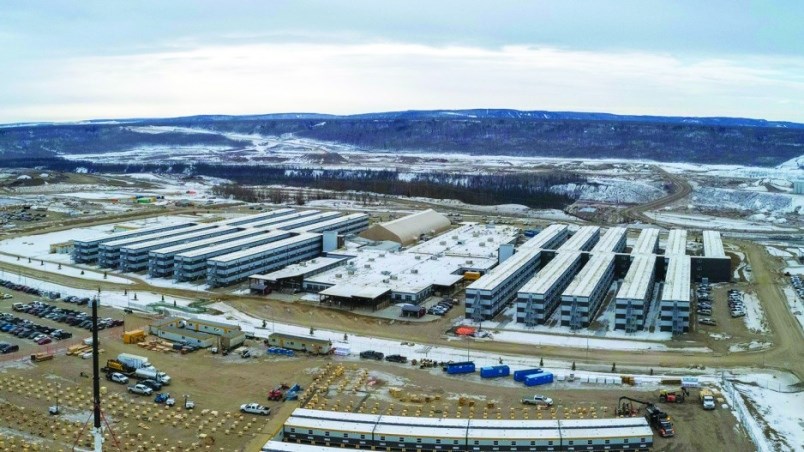 The workforce on Site C dropped by nearly 2,000 in April due to the COVID-19 pandemic, with 3,029 workers reported, according to the latest employment figures from BC Hydro.

BC Hydro says the count is a total employment number and a calculation of all workers who worked during the month, and that April’s labour count reflects the decision to scale back construction in March.

There were 4,896 workers reported in March, and as of today (June 4), there were 887 reported at the work camp outside Fort St. John.

Workforce numbers are collected monthly from contractors, and the pandemic stopped a significant amount of work for two months, including the powerhouse and spillways. BC Hydro has said construction will be ramping back up into the summer.

Of the April workforce, around 17 per cent was local, with 513 Peace region residents employed as construction and non-construction contractors, down by 238 month-over-month.

Locals made up 22 per cent of the construction and non-construction workforce total of 2,289 workers, which includes work at the dam site, on transmission corridors, reservoir clearing, public roadworks, and camp accommodations.

There were 2,133 B.C. workers, or 70 per cent, working for construction and non-construction contractors, and in engineering and project team jobs.

There were five temporary foreign workers employed in specialized positions (-1), and another 49 managers and other professionals working under the federal international mobility program (-6).

Of the April workforce, nearly 45 per cent were engineers (500), heavy equipment operators (500), and other professionals, technicians, and office staff (225).

There were another 125 carpenters and scaffolders, and 125 construction managers and supervisors reported.

There were less than 100 workers reported in various other trades, including cement masons, electricians, environmental inspectors, crane operators, mechanics, millwrights, pipefitters, and welders.

There were roughly 25 healthcare workers reported.

St. Paul's Hospital land sold to Concord Pacific for nearly $1 billion
Aug 12, 2020 4:56 PM
B.C. hiring 500 people to help with COVID contact tracing
Aug 12, 2020 4:21 PM
Comments
We welcome your feedback and encourage you to share your thoughts. We ask that you be respectful of others and their points of view, refrain from personal attacks and stay on topic. To learn about our commenting policies and how we moderate, please read our Community Guidelines.