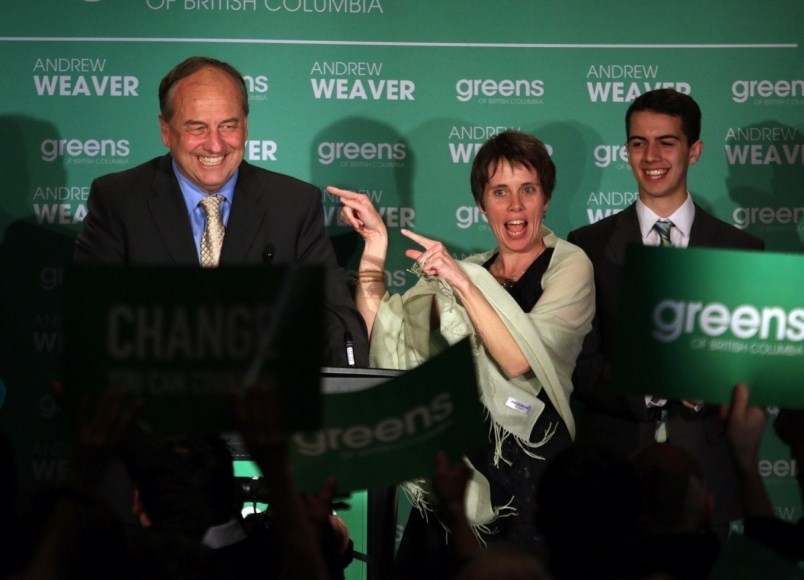 Sonia Furstenau, centre, with former B.C. Green Party leader Andrew Weaver in May 2017. Furstenau is running to replace Weaver as leader of the party. (via The Canadian Press)

First-term Cowichan Valley MLA Sonia Furstenau is the first into the race to succeed Andrew Weaver as leader of the B.C. Green Party.

She made the announcement at a Monday morning (Jan. 27) news conference accompanied by six people who endorsed her bid.

She said B.C. needs a new style of leadership that listens to evidence and communities.

Furstenau said there is a disconnect between government and people that sees good ideas stalled out due to “old ways of thinking and partisan divisiveness.”

Furstenau, a Shawnigan Lake resident, got into local politics several years ago while fighting the plan to build a contaminated soil dam on a hillside above the lake.

That turned into a years-long campaign during which the site eventually closed down, leaving questions now about what to do about it. She was elected to the regional board and has worked as a high school teacher.

She devoted much of her attention over her 30 months as an MLA on environmental issues, particularly climate change. She was also critical of the status quo approach to government and the traditional ways of viewing political differences.

On Monday, she said: “We need to embrace solutions to the climate crisis that will improve quality of life and create opportunities for British Columbians. We need to shift away from century-old markers like GDP growth to more meaningful indicators like equality, infrastructure, health and well-being.

“We need to move beyond the tired ideological wars of the 20th century, focus on the concrete outcomes we want to achieve, and work collaboratively to find the best common-sense policies to make them happen.”

She said she has raised $12,000 so far and has hired two co-campaign managers.

The new leader will be elected at a June convention. The party now has two MLAs, since Weaver followed up his resignation as leader by resigning from the party as well.