Heading into training camp, Jim Benning and Travis Green suggested that no one’s job was safe and that they would be willing to waive a veteran to make room for a younger player.
0
Oct 1, 2018 4:05 PM By: Glacier Media 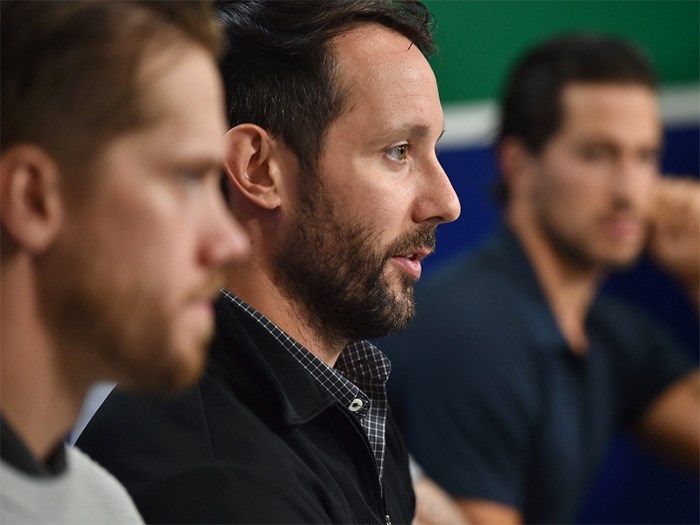 Heading into training camp, Jim Benning and Travis Green suggested that no one’s job was safe and that they would be willing to waive a veteran to make room for a younger player.

“Yes, and I think that’s what training camp is gonna be for,” said Benning. “We’ve got extra players and the players know that. It’s gonna be how they show at camp.”

“Everyone should feel pressure,” said Green. “Our team got 73 points last year.”

On Monday, Benning followed through on those words, putting Sam Gagner on waivers, along with Darren Archibald. That’s not entirely surprising — Gagner was the veteran most likely to get waived and he didn’t make much of an argument to stay in the preseason. What is surprising, however, is the younger player he was waived to make room for: Tyler Motte.

With Gagner and Archibald on waivers, that brings the Canucks roster down to the required 23 players, assuming Antoine Roussel is on the Injured Reserve list to start the season. Technically Evan McEneny and Thatcher Demko are still on the roster as well, but they’re going through their own injury recovery; McEneny is recovering from a significant knee surgery, while Demko is in the concussion protocol.

Here is the roster, sorted into some semi-arbitrary lines and pairings:

The injury to Roussel allowed the Canucks to put of making a decision on Brendan Leipsic and Nikolay Goldobin, and keep Tyler Motte, who had a great preseason, on the roster. Of course, “great” is a relative term given how poorly the Canucks performed in the preseason, but Motte made it easy for Green to see how he fit in the lineup.

Motte looks like a speedy, hard-forechecking third-line winger. The way he plays makes it easy to find a role for him in the lineup, particularly since the Canucks are set on using a somewhat archaic offensive top-six, defensive bottom-six setup with their forwards.

Gagner, on the other hand, didn’t find a place for himself in the lineup.

That’s partly on him. Gagner struggled in his first season with the Canucks, scoring just 10 goals and 31 points despite plenty of power play time. He also didn’t stand out in the preseason or, when he did, it was frequently for the wrong reasons.

If the Canucks were willing to shelter Gagner on the fourth line at even-strength and use him as a power play specialist, akin to how Columbus used him when he scored 50 points in 2016-17, then he could have fit in the lineup. With the signings of Tim Schaller and Jay Beagle, however, the Canucks made it clear they wanted to have a defensively-inclined, shutdown fourth line that would face tough opposition and tougher zone starts.

That’s not Gagner. While Gagner has good vision and awareness in the offensive zone, it seems to abruptly disappear as soon as he crosses the blue line into his own zone. He’s simply not a good defensive forward; he was on the ice for the most scoring chances against of any Canucks forward last season.

That meant that if the Canucks couldn’t shelter him in a depth role, he’d have to play on a sheltered top-six line. The Canucks, however, have younger players that they want in those roles, like Nikolay Goldobin, Brendan Leipsic, and Elias Pettersson.

Since Gagner has experience playing centre, he could have conceivably played in the middle until Pettersson was more comfortable in the role. Unfortunately for Gagner, Pettesson looked comfortable almost immediately and it seems like Green will be sticking with the young Swede at centre to start the season.

There are just a couple questions remaining for Gagner. Will he get claimed off waivers? If so, who will claim him? If not, will he get sent down to Utica or will the Canucks look to trade him to another NHL team while retaining salary?

The future is a little more clear for Darren Archibald. While he is a capable fourth-liner at the NHL level, with a dash of physicality and penalty killing, the Canucks’ crowded bottom-six made it clear he was going to get waived.

While there’s a chance a team might snag Gagner off waivers, that’s unlikely for Archibald, who has minimal NHL experience. Most teams won’t be interested in a 28-year-old fourth-line winger with just 43 career NHL games.

That said, it wouldn’t be surprising to see Archibald back in the NHL this season. When injuries inevitably strike, Archibald is a good fit on a defensively-oriented, physical fourth line.