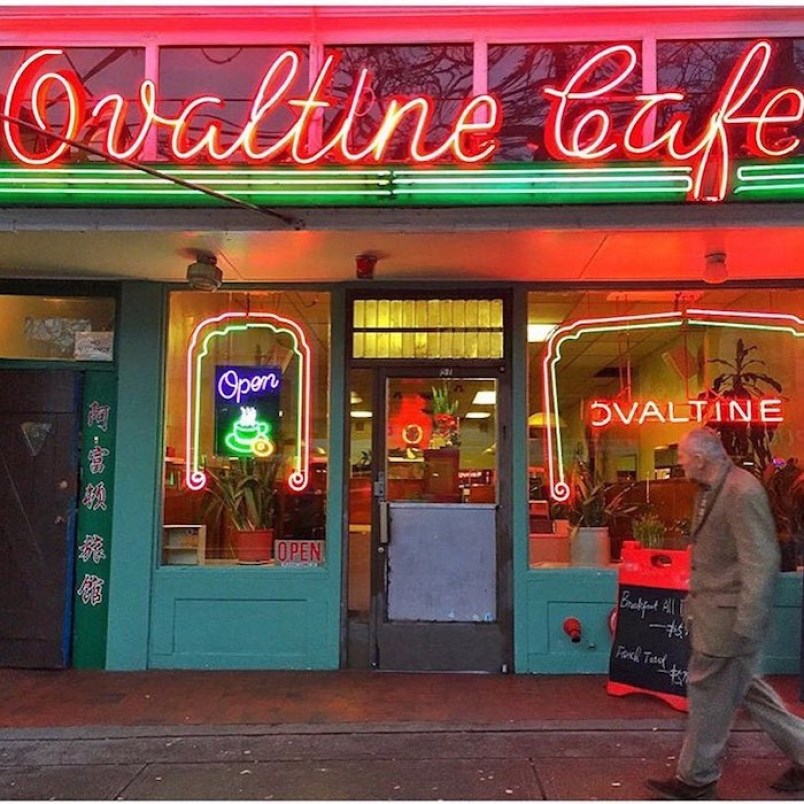 The Telegraph has given the Downtown Eastside’s Ovaltine Café some love. (via @ovaltinecafeyvr/Instagram)

Vancouver loves its coffee, from bean to cup. The city is packed with third wave coffee shops, where brewing is an art form, the graphic design on point, and the Instagram opportunities bountiful.

The art of enjoying a cafe in itself is not a new-ish concept, at all. It’s a time-honoured tradition, and one fuelled easily in numerous corners of the globe. So when it comes to a list called the “Top 50 Cafes on Earth,” you can imagine the scope–and perhaps how hard it may have been to narrow that down.

Vancouver has a spot on the list, and its inclusion is making headlines. The storied Ovaltine Cafe, serving up classic “coffee shop” vibes of the diner variety since the early 1940s, is among the 50 selected by the UK’s Telegraph.

Written by “Destination Expert” Chris Moss, the piece explains the value of the “cafe,” as a “window on the world.”

“You see ordinary people – locals as well as visitors – coming and going, taking time out between work and home, meeting friends or colleagues, joining families,” the introduction continues.

True enough, the Ovaltine has been a beacon for the locals of Vancouver’s downtown eastside. Steps from Main Street on Hastings, The Ovaltine – known by many from its striking neon signage, if nothing else – opened in 1942, and has remained a stalwart in the neighbourhood through decades of evolution.

The Ovaltine is a classic greasy spoon – BLTs, burgers and fries, pots of coffee sizzling on the burner – that had a new lease on life granted in 2014 when mother-daughter duo Grace (mom) and Rachel Chen took over ownership of the space.

“From the Edwardian building to the projecting pink neon signage to the unreconstructed décor – not to mention that anti-cool name – you’ve got to love this 1942 diner-cum-coffee shop.”

“Climb on to one of the red vinyl stools drilled into the floor by the long Formica bar or bag a high-walled wooden booth to enjoy a plate of omelette, pork chops or fried chicken with your filter coffee or Ovaltine shake – prepared on a vintage machine. Regularly used as a film location, when it’s dark outside this place takes on a distinctly noirish Edward Hopper quality.”

The only Vancouver spot on the globetrotting list (Montreal is the only other Canadian city, with their Café Olimpico making the cut), The Ovaltine might not be the first spot to come to mind when you think Vancouver and cafe. Revolver, Timbertrain, Nemesis, Milano, Nelson the Seagull, Elysian, 49th Parallel, Prado, Matchstick…we are spoiled for choice for places to have good coffee, good eats, and good people watching (or laptop working or reading and so on).

So Ovaltine is a bit of an unlikely choice, albeit a creative one, and one that, all things considered, is well-deserved, since it is one of the city’s oldest operating restaurants, and a special place for many that’s endured through the years. Discussing its merits for people-watching can veer the conversation into one of privilege; in a neighbourhood so many outside publications caution visitors to Vancouver to avoid, it’s problematic to send them there to observe the locals in their habitat.

It’s a worthy place to get some high-profile attention; not only is there a profound history, but also it continues to serve as a place where anyone can sit and enjoy reliable food at a decent price.

The Ovaltine Cafe is located at 251 East Hastings Street in Vancouver.