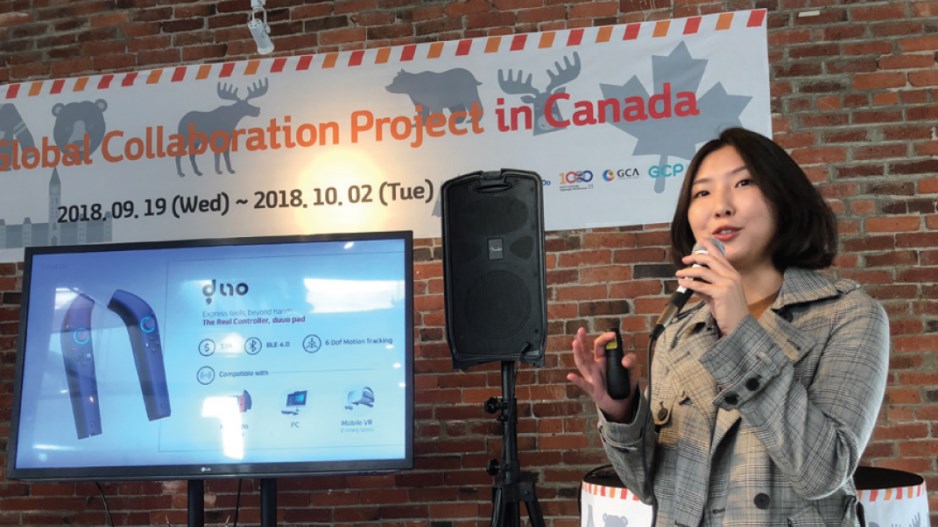 Vancouver's rising profile in the virtual reality and augmented reality (VR/AR) industry is attracting Asian startups looking for room to grow outside of their confined domestic markets.

The city’s drawing power could be seen in late September, when the VR/AR Global Summit, now under the purview of the VR/AR Association after a two-year run as the CVR show, drew at least two major Asian delegations, each bringing five startups and newly established firms to find a North American foothold in Vancouver.

The delegations are from South Korea and Taiwan, two of the Four Asian Tigers whose economies grew rapidly from the 1960s to the 1990s. In both cases, these markets have stagnated in recent years, and officials say they are now looking in a “blue ocean” sector like VR/AR, where innovation and first-movers advantage still reign supreme, to spur improvements in their domestic business climates.

Extended reality (XR), the umbrella term for technologies involving the interaction of real and virtual environments, “is very new, and it requires space to develop,” said Fiona Chen, vice-president of marketing for Taiwan’s Digi Space Co. Ltd., an incubator that led the Taiwanese delegation.

Chen noted the group chose Vancouver and the VR/AR Global Summit instead of known tech meccas like the Silicon Valley and Seattle, because “the opportunity for working together is bigger in a newer ecosystem. Given the policies in the United States moving toward protectionism, we are more attracted to the Canadian attitude toward overseas businesses, and that openness is very important to foster innovation.”

The South Korean delegation, led by the non-profit Gyeonggi Content Agency (GCA), also brought one company from the medical field: M2S, a startup specializing in VR eye examinations. But GCA representatives also noted they are presenting projects with much more of a focus on consumers, such as Dimicolon’s interchangeable gaming controller that can mimic the feel and functions of steering wheels and firearms in a VR/AR environment.

GCA delegation leader Anna Yim noted that Vancouver was chosen earlier this year as one of three global locations on which South Korea will focus its international collaboration efforts (the two others are New York and Manchester, U.K.).

And while B.C. tech officials said the delegations demonstrate Vancouver’s increasing clout in the VR/AR field, they stressed the rising interest in the sector should also be taken as an opportunity to improve in areas, such as related gaming and e-sport trends, where B.C. lags behind players in South Korea.

One official attending a Vancouver GCA event after the summit noted that, by catching up to Asia’s tech trends more quickly than other western markets, Vancouver would gain another edge in its bid to expand VR/AR development against competitors like Seattle and the Silicon Valley.

“I think everybody is aware that … there used to be a long time lag between innovations in online gaming in South Korea coming over to the West,” said James Hursthouse, former director of DigiBC and a veteran tech consultant in the area of B.C.-Korea collaborations.

“For example, people [in North America] have recently started to say e-sports is the new trend, but I remember going to the World Cyber Games in Korea all the way back in 2002. So there was this four-to-five-year lag, but that’s now increasingly condensed.”

To get the B.C.-South Korea tech relationship to a level where deals can be signed, the Korean delegation is staying in Vancouver for 12 days to drum up business, Hursthouse noted. He added that, with GCA sending many of the same representatives to New York and Manchester before presenting bids back in Korea, the potential for Vancouver companies to work through the GCA with VR/AR players in the United States and Great Britain is also an intriguing proposition.

“For the next year or so, the focus will really be on bringing closer not only the relationship between Korea and these identified markets, but also to promote partnerships among those three destinations in general,” Hursthouse said.

VR/AR Global Summit organizer and VR/AR Association founder Nathan Pettyjohn said he is happy to see the event becoming increasingly attractive to startups from Asia but added that he often feels that Vancouverites, even some within the tech industry, are not aware of the opportunity presented by the city’s expanding VR/AR clout.

Pettyjohn added that he wants to draw 2,000 to 3,000 attendees to next year’s Vancouver summit. This year’s event drew around 900.

“A lot of people are already using the technology without knowing it. If you’ve used Snapchat, you’ve used it. The consumer engagement is already there … and it will continue to grow because, in a way, VR is the closest thing we have to time travel. You are transported to a different time and space, in what we call ‘cognitive engineering.’ That’s something that can have a big impact on future consumer behaviour and brand loyalty.”