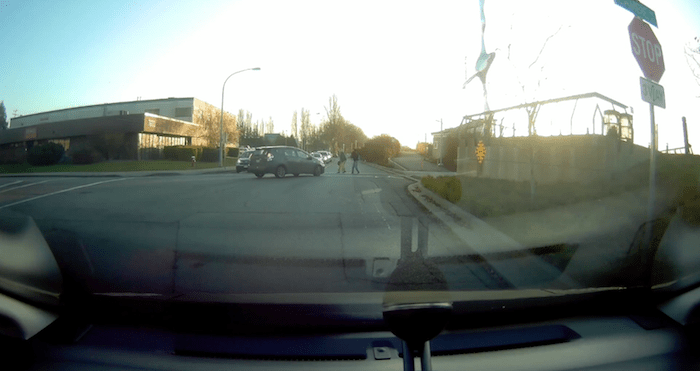 Dashcam video has surfaced of a near-miss at a Metro Vancouver intersection that could have resulted in serious injuries.

The footage begins by showing the driver’s perspective of River Road in Richmond. As the driver makes their way down the street, they slow to a stop at the intersection of Cambie Road.

Coming from the opposite direction, a number of cars have stopped at the intersection to allow two people to cross. The pedestrians begin to cross the street in the designated crosswalk when a car makes a quick left turn through the intersection. The two people jump back as the car comes to an abrupt stop, narrowly missing them.

Pertam posted the video on Reddit, captioning “Stay safe out there.”

Stay safe out there... from r/vancouver

A number of commenters remarked that the sun could have obscured the driver’s vision, but a number of others said that they were simply driving quickly and not paying attention.

B.C. community gets a new electric Zamboni
Oct 26, 2020 5:05 PM
Comments
We welcome your feedback and encourage you to share your thoughts. We ask that you be respectful of others and their points of view, refrain from personal attacks and stay on topic. To learn about our commenting policies and how we moderate, please read our Community Guidelines.