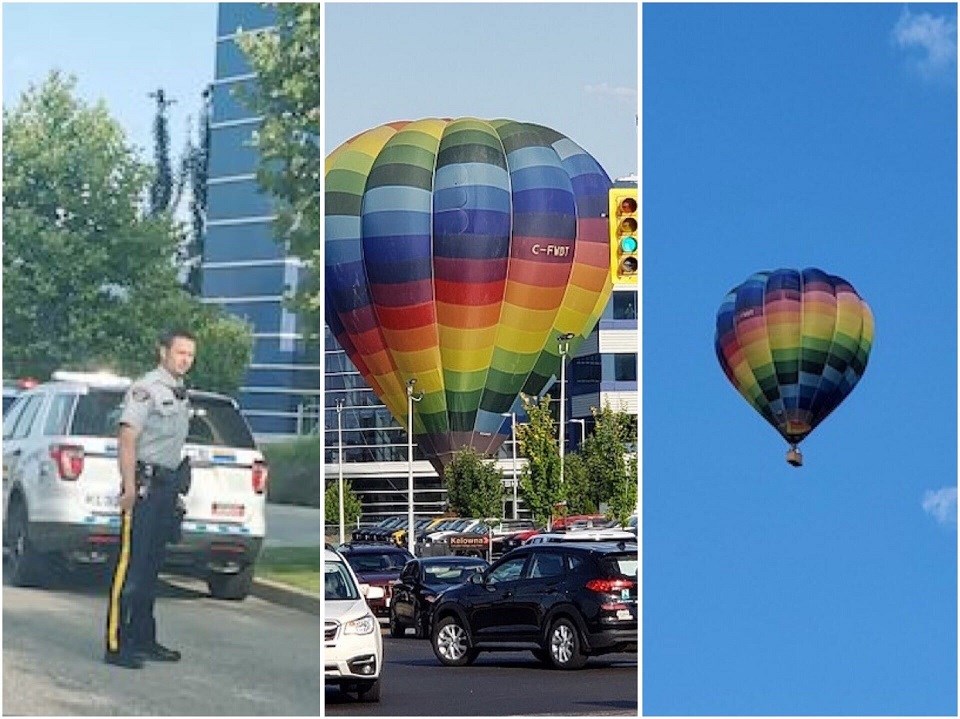 A hot air balloon made an unexpected landing in downtown Kelowna on July 30, 2020. (via Contributed)

Steve Wraith tells Glacier Media he had just gotten off work at 6:30 a.m. Thursday morning (July 30) and was enjoying a coffee when he noticed a hot air balloon struggling to stay aloft.

Wraith says he enjoys watching the hot air balloons across the Kelowna skies, but one looked like it was having a hard time maintaining altitude.

It decided to make an emergency landing near a busy downtown street in the B.C. city, which RCMP responded to the unusual incident.

"I heard him, I could hear the flame (makes flame sound) and he goes up maybe 10 feet and then they kinda start falling. It looked like he was trying to get altitude and he just couldn't get it."

This isn't the first time Wraith has seen balloons land in his area, "they land on our street because it's quiet and they quickly fold it down and just keep going."

This one touched down by the McIntosh Centre on Leckie Rd. but also managed to get going before it caused too much of a disturbance.

Wraith says he's been in a hot air balloon and speculates that with the hot temperatures and lack of wind the balloon just couldn't stay airborne.

"Think about this the air in the balloon is the same temperature as the air outside it just can't stay aloft."

Tesla offering free 'touchless' test drives in B.C.
Aug 3, 2020 12:35 PM
Comments
We welcome your feedback and encourage you to share your thoughts. We ask that you be respectful of others and their points of view, refrain from personal attacks and stay on topic. To learn about our commenting policies and how we moderate, please read our Community Guidelines.