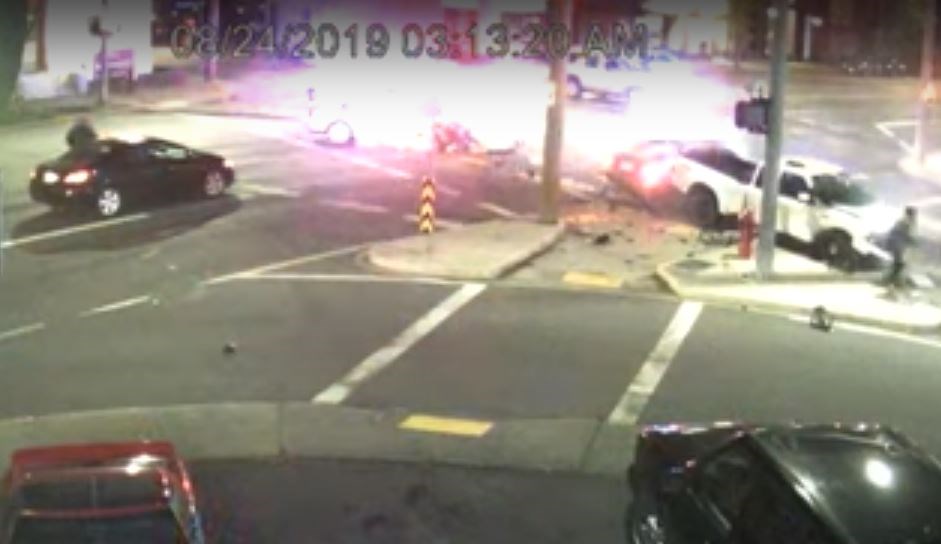 A man has been arrested following a high-speed crash involving four vehicles in Victoria early Saturday at Douglas and Bay streets.

Three people were treated on scene and transported to hospital in stable condition, according to B.C. Emergency Health Services.

The crash was caught on video by surveillance cameras at Budget Brake and Muffler at 12:12 a.m. The video is set to Eastern Time and time-stamped the crash three hours later.

Shortly after midnight, Victoria police officers attempted to pull over a vehicle in the area of Gorge Road and Rock Bay Avenue.

The driver fled at high speed and collided with three vehicles in the intersection of Douglas and Bay streets.

The surveillance footage shows a white truck driving eastbound on Bay Street and colliding with three vehicles in the intersection. Two vehicles were headed north and one was driving south on Douglas Street.

One car flipped and was thrown a significant distance down the road.

A cyclist riding north on the sidewalk on Douglas Street and about to enter the intersection jumped off his bike just in time to avoid the collision.

Footage shows him falling backward, crawling and then running away from his bike, which lies next to the white truck when the vehicle comes to a stop.

According to police, the driver fled from the crash on foot. Officers arrested a suspect nearby.

Two police cars arrived in less than a minute as witnesses started to gather.

Officers were still on scene as of 6 a.m.

Police are looking for any witnesses to the collision or anyone who has video of the incident and has not yet spoken to investigators.

The Independent Investigations Office, a civilian-led agency that looks into cases of police-involved deaths or serious harm, has been notified.