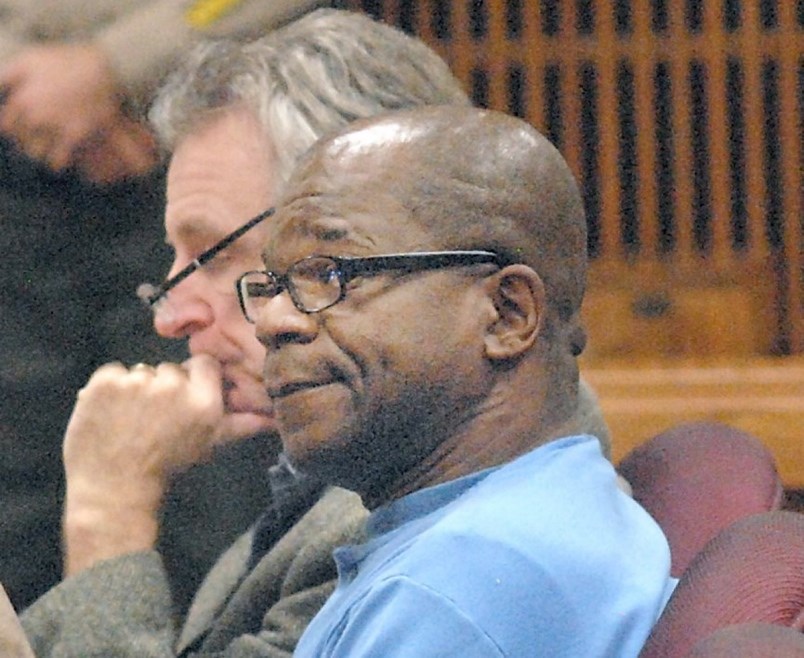 Tommy Ross Jr., right, sits with one of his lawyers in Clallam County Superior Court in November 2016. (via Keith Thorpe)

A 60-year-old American who spent nearly 38 years in a Canadian prison for strangling a Victoria woman has been arrested in Sacramento, California.

Tommy Ross Jr. was arrested March 31 in Rancho Cordova and charged with endangering the life or health of a child, threatening to commit a crime resulting in grievous bodily injury or death, battery, threatening with a weapon and destroying wireless communications to prevent a call for assistance.

Ross was convicted of the 1978 murder of Janice Aili Forbes at her Queens Avenue apartment in Victoria.

He was sentenced to life in prison.

In November 2016, Ross was released on full parole and deported to the U.S., where he was immediately arrested at the border and returned to Clallam County to face a charge of killing 20-year-old Janet Bowcutt in Port Angeles in 1978 — a few weeks before Forbes was killed.

Ross was released from custody in Oregon in late November 2018, after a Clallam County judge dismissed the first-degree murder charge against Ross on the grounds that his right to a speedy trial was violated.

On Tuesday, prosecutor John Troberg said an appeal of the decision to dismiss the murder charge is pending in the Port Angeles case.

Troberg, who has worked on the case for several years, said he knew from court proceedings that Ross has an elderly mother, a sister and some extended family with children who live in California.

“When he left, that’s where he indicated he was going to stay,” Troberg said.

“So he’s back in jail and we still have an appeal pending.”

In his decision to dismiss the murder charges against Ross, Superior Court Judge Brian Paul Coughenour noted that Ross was originally arrested in Los Angeles in 1978 on the Victoria and Port Angeles murder charges.

The judge said the Clallam County prosecutor released Ross from his arrest warrant and agreed to let him return to Canada on the understanding that he would return to the U.S. following his trial.

The prosecutor’s office later learned that Ross would have to serve his Canadian sentence before being turned over to U.S. authorities.

Coughenour ruled that the decision by Clallam County prosecutors to relinquish jurisdiction over Ross nearly 40 years ago led to a violation of his right to a speedy trial.

Market momentum eludes domestic PPE makers
Nov 27, 2020 2:05 PM
Comments
We welcome your feedback and encourage you to share your thoughts. We ask that you be respectful of others and their points of view, refrain from personal attacks and stay on topic. To learn about our commenting policies and how we moderate, please read our Community Guidelines.