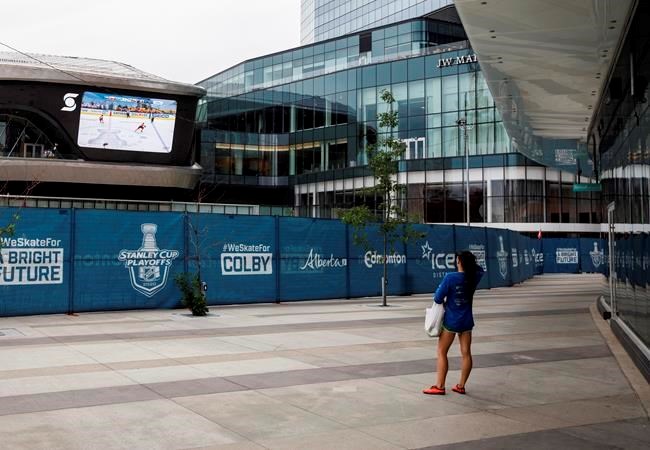 The end is near for the bubbled NHL playoffs, and those in charge of the rinks say it's been smooth as an ice sheet — except maybe when teams come to play for three periods and stay on for another five.

"That was a fun game, definitely something I'm going to remember," said Derek King, recalling the Aug. 11 first-round game between the Columbus Blue Jackets and Tampa Bay Lightning in Toronto's Scotiabank Arena that didn't end until Tampa's Brayden Point scored midway through the fifth overtime.

King said his crew adjusted on the fly, monitoring real-time sensors on ambient temperatures, ice temperatures and humidity levels, as the first overtime became the second, became the third, then the fourth...

The ice, meanwhile, was grinding down and down, from one and a half inches to close to an inch — the red line for ice levels.

"We had gotten to the fifth period. We didn't know how many more we were going to go," said King.

"You don't want to shock the players, so to speak, when they come out, going from a soft sheet of ice to a hard sheet of ice and back and forth.

King handled games in Toronto, watching the ice, boards, gates, glass and all other elements of the state of play. Counterpart Mike Craig did the same in Edmonton, with King later joining Craig in Edmonton for the final-four round and now the Stanley Cup final.

There were 24 teams involved in the return-to-play scenario, with games played with no spectators. The players, and Craig and King, were kept in isolation between contests to prevent contracting the coronavirus.

Humidity can be the arch-nemesis of icemakers, but Craig said with as many as two or three games a day during the early rounds, the enemy was losing ice depth.

They corrected that by building the depth a bit higher than normal at the start of the day and then working overnight to mist layer by careful layer of water, over and over again, to build the ice back up.

"From the start of the tournament, we've had pretty much a 24-hour-a-day schedule with the local crew," said Craig.

"Even on three games a day, we were able to maintain the ice exactly the way we wanted."

Both Craig and King have years of experience in ice-meistering, Craig at his father Dan's knee when Dan built the ice-white platform the Edmonton Oilers dynasty skated on in the 1980s, then cutting his teeth on the multiplex facility in Kelowna, B.C.

King started on a small rink in Manitoba, graduated to the MTS Centre in Winnipeg and then on to a job in the NHL.

Experience can be measured in the challenging NHL outdoor and special event games, building and maintaining ice sheets from Dallas to Beijing.

It can get hairy.

King remembers when heat and rain washed out the Dallas sheet four days before the New Year's Day outdoor contest this year, melting it into an ice-white soup that crews, working around the clock, cleaned up and rebuilt.

"As much as it was a stressful time, I would do it all over again with the people I worked with."

Watch hockey with both and you're viewing two different games. King says while friends are cheering the goals, he's looking at how the players skate, how much snow is building up, and whether the puck is lying flat or bouncing around like a hot kernel in a popcorn popper.

If a shot takes a weird bounce off the boards, he wonders if there is a defect or a popped-out screw. During games, if a player falls with nobody around him, he might go out there between Zamboni floods to inspect the spot and make sure everything is fine.

The bubbled playoffs, going on now for two months, have been a boon to the icemaker as it makes it easier to handle the humidity and environment — with reporters and photographers in coats and gloves shivering in the higher elevations of the rink — but a bummer when cheering fans are replaced by silent tarps.

"We've been able to keep things very consistent, but we'd much rather have fans in the building," said Craig.

High up in Rogers Place, the bubbled playoffs have changed many lives. For Mark Lewis, it gave him a second go-round on a first love.

Lewis, the longtime public address announcer for the Oilers, hung up the microphone in spring of 2016, saying 35 years were enough.

But he came back for a spell to help out with the crush of games in the first two rounds announcing goals, penalties and power plays in 15 contests to ironically become, he says, the voice of the Oilers' arch-foe Calgary Flames.

Lewis grew up with the game. His earliest memory was as a youngster watching the NHL all-star game with his dad in the Montreal Forum in 1957, with a leather-lunged fan nearby really giving the gears to Gordie Howe.

For the Oilers, Lewis was the first to announce not only the goal, but the context: "The goal, his 15th of the season, scored by No. 11, Mark Messier!"

When he was hired 1981, he recalls then-Oilers PR director Bill Tuele telling him: "When the Oilers score, we want lots of enthusiasm. Really punch it. When the other team scores, really take it down a whole bunch. And just be the voice of excitement."

For the bubbled playoffs, Lewis pumped up both teams, calling the experience fun but surreal.

"I can sure tell you in 35 years, I never did the PA to an empty building," he said.

"You're seeing some awfully good hockey right now … but we could sure use fans.

"The game is all about emotion and passion, and the fans bring so much of that."

B.C.'s Seth Rogen on fighting cannabis stigma and why pot should be as accepted as beer
Oct 23, 2020 3:05 PM
Comments
We welcome your feedback and encourage you to share your thoughts. We ask that you be respectful of others and their points of view, refrain from personal attacks and stay on topic. To learn about our commenting policies and how we moderate, please read our Community Guidelines.