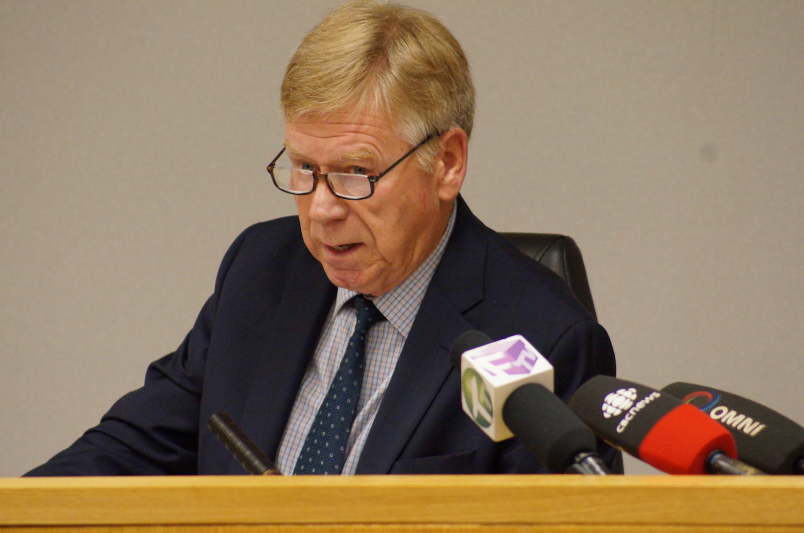 Austin Cullen, who heads the Commission of Inquiry into Money Laundering in British Columbia. (via Graeme Wood)

If money laundering were a movie, John Candy would have been an ideal choice to play Canada.

Not the inept-but-streetwise title character from Uncle Buck, though. More like the inept-but-clueless security guard from Vacation.

Going back over former RCMP deputy commissioner Peter German’s reports into the way gangs use B.C. as an illicit-cash laundromat, the lasting impression is of a country asleep at the switch, allowing transnational crime to flourish unchecked to the point that it has skewed whole sectors of the economy.

At the same time, a separate provincial government panel deduced that $7.4 billion was laundered in B.C. last year alone, including more than $5 billion in the real estate sector, inflating prices by five per cent.

German found police and prosecutors lack the resources and expertise to counter all this. He also cited a dysfunctional history between the provincial gaming branch and B.C. Lottery Corp. investigators. FinTRAC, the federal agency that monitors financial transactions, doesn’t have an enforcement arm. Legislation is outdated.

Those findings were echoed this week when the Cullen Commission into B.C. money laundering rolled into Victoria. The public hearing at the Marriott hotel was part of an information-gathering road show that will precede next year’s more formal evidence-gathering proceedings. It’s all being presided over by Austin Cullen, a B.C. Supreme Court justice who projects the reassuring gravitas of Trump nemesis Robert Mueller.

It was another, unrelated Cullen who offered some of the grimmest testimony at the Marriott. Victoria’s Roy Cullen is a former MP who helped design and implement Canada’s money-laundering regime, and who once chaired the money-laundering task force of the Global Organization of Parliamentarians Against Corruption.

He told the hearing that while the law requires the real estate sector, financial entities and others to report suspicious transactions, FinTRAC doesn’t do a good job of ensuring they do so. Also, the sanctions for ignoring the law aren’t much of a deterrent.

What’s worse, when FinTRAC does report something hinky, it doesn’t necessarily lead to action. “It is my understanding that in recent times, a number of very substantial money-laundering information packages — solid leads — prepared by FinTRAC and submitted to [police] for follow-up and investigation were never acted upon by the RCMP,” he said.

That reinforces a message we have heard before: there’s more money laundering than there are cops with the ability to fight it.

Roy Cullen applauded B.C.’s plans for a beneficial-ownership registry — essentially a requirement for corporations, trusts and partnerships that buy property on behalf of others to disclose the identity of those people — but said government must also ensure those disclosures are actually scrutinized.

It’s not good enough to leave it up to the media and self-appointed watchdogs to ensure that nobody’s fibbing about who really owns a property, he said. (By the way, the B.C. Finance Ministry expects to have the registry up and running next spring. Also, private B.C. businesses will have to list beneficial owners beginning May 1.)

Roy Cullen was just one of a half dozen presenters at the Victoria hearing. Also going to the microphone was a woman named Bernadette Armstrong, who offered a perspective that got right to the heart of why the commission matters.

“I’ve worked hard all my life,” she said. Her children work hard, too, have good jobs. Still, those children can’t afford to buy homes in their hometown, Victoria.

The way she sees it, the laundered money pushing up Vancouver prices has led homeowners there to cash out and move to the Island, driving prices up here, too.

“My kids can’t compete with that,” she said.

People like Armstrong — all of us — need to have faith in the system, to believe that those in power aren’t allowing the bad guys to play the good guys for suckers.

Right now, that faith is lacking.

The Cullen Commission is to deliver an interim report next November and a final document in May 2021.

Money laundering drove up B.C. real estate prices by 5 per cent: reports
May 9, 2019 1:45 PM
Comments
We welcome your feedback and encourage you to share your thoughts. We ask that you be respectful of others and their points of view, refrain from personal attacks and stay on topic. To learn about our commenting policies and how we moderate, please read our Community Guidelines.