Opinion: From catwalk to landfill: journey of disposable wear 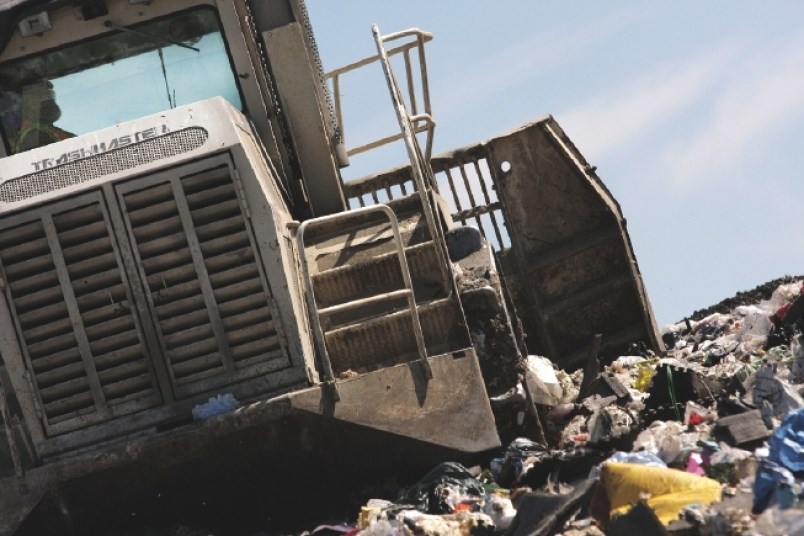 There's an estimated 21 kilograms of textiles per person piling up in the Hartland Landfill. (via Times Colonist)

News item: Fashion-conscious British Columbians are clogging landfills with discarded clothing.“Is that a new shirt?” she asked.“Yes,” I replied brightly. “I bought it on Satur...”“WHY NOT JUST RAM AN ORCA WITH AN OIL TANKER INSTEAD, YOU EARTH-MURDERING MONSTER?!”

Just kidding. That didn’t happen. For one thing, I haven’t chosen my own wardrobe since Mulroney was prime minister. Most days I don’t even dress myself (“You’re not going out looking like that, are you?” “Of course not. These are just my car-warming clothes. Please remind me of what I wanted to wear.”)

Nor do I chuck garments in the trash — not out of any sense of environmental responsibility, but because it would simply never occur to me to do so. Fashion be damned, once I wear an article of clothing, the two of us have a till-death-do-us-part relationship, bonded like Trump and Cohen until one of us turns to dust. If something I own ever shows up in Value Village, you can be pretty sure it’s only there because I had something nicer to be buried in. I still have a souvenir T-shirt that someone sent me from the 1986 Gorbachev-Reagan summit in Reykjavik.

Maybe it’s a generational thing. Comox Valley humourist Harold Macy once wrote a piece in which he chronicled the life cycle of his grandfather’s blue denim overalls: “Annually, he bought a new pair, stiff as boards, which he initially saved for church. After a few months, they became his house pair. Eventually, they were worn at the shop, on the tractors and in the barn doing the chores he loved. After a year or so on this duty, they were fit only for wipe rags. Grandma made quilt squares from the few sections that were not threadbare, grease stained or soiled by animals.”

Contrast that approach with what they’re seeing in the Lower Mainland, where the dump deluge is so great that the Metro Vancouver regional district launched a campaign this past week to lower the mountain of clothing piling up in the landfill. For whatever reason — fickleness of fashion, consumer culture, the low cost of T-shirts sewn by nine-year-old fingers in 10-cent-an-hour sweatshops — Canadians go through clothing like TMZ goes through Kardashians, buying three times as many clothes as we did in the 1980s.

More than half of the trendy fast-fashion garments we buy have the shelf life of a White House staffer, are disposed of in less than a year, says Metro Vancouver. It estimates clothing makes up half of the 20 million kilograms of textiles — that’s five per cent of everything in the dump -— trashed there annually. Here in the capital region, the figure is just under six per cent. That’s 21 kilograms of textiles per person, piling up in the Hartland Landfill.

That highlights a broader reality: As much as we like to think of ourselves as enlightened and green, the typical Canadian churns out more trash than the National Enquirer. We might talk like David Suzuki, but we walk like Goliath. In 2013, the Conference Board of Canada calculated we produce more garbage per capita than anyone else on Earth, 2.7 kilograms a day.

Think of how much junk you take for granted, and how recently it came into your life. The normal we grew up with is not, in fact, normal. Most of the disposable items we now take for granted became popular only in the past few decades.

The first Heinz ketchup packet was bitten open in 1968. The disposable Bic lighter first flickered in 1973, around the same time the company introduced its disposable razor. The U.S. went from 350,000 tons of disposable diapers in 1970 to 1.9 million tons in 1980; they take up to 450 years to decompose, just like Christmas cake or memories of the Mark Messier-era Canucks.

The plastic shopping bags we’re trying to get rid of weren’t widely used in grocery stores until the mid-1980s. Paper-poly coffee cups took off shortly after that. The cardboard coffee-cup sleeve wasn’t invented until 1991. The little splash sticks that Starbucks uses to block the hole in the lid arrived in 2008. BTW, the Recycling Council of B.C. estimates Canadians go through 1.6 billion single-use coffee cups each year (yes, you can throw them in the recycling, but no, you don’t).

On and on it goes. Every time you buy fast food, it comes wrapped up like a Christmas present. Globally, we use a million plastic water bottles each minute, 91 per cent of which aren’t recycled, says Forbes magazine. Just last month, Justin Trudeau threw out a perfectly good attorney general.

Why are we in such a hurry to trash the planet? Keep your shirt on.

Rare albino crow rescued in North Vancouver
Aug 9, 2020 11:23 AM
Comments
We welcome your feedback and encourage you to share your thoughts. We ask that you be respectful of others and their points of view, refrain from personal attacks and stay on topic. To learn about our commenting policies and how we moderate, please read our Community Guidelines.