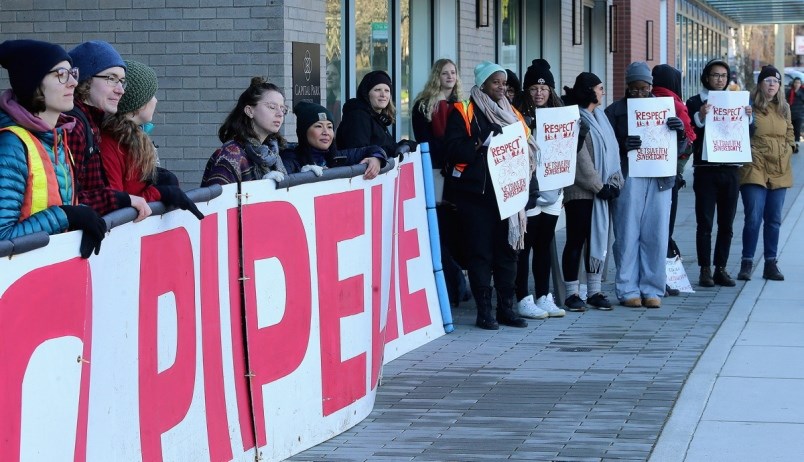 Two First Nations members toured the demonstrations at government offices on Friday morning to shake the hands of individual supporters and personally thank them.

Steve Sxwithul’txw of the Penelakut Tribe and a woman from another First Nation band on Vancouver Island who did not want her name revealed welcomed the protesters.

Many of the demonstrators represent the next generation, she said. A large proportion of the protesters around her were young adults.

“We don’t see a lot of our people out here, but what’s not recognized is that when our people put themselves out there, we become a target of threats and violence,” she said.

The pipeline isn’t the only issue — it’s also about the history of Indigenous people and what they have experienced, said Sxwithul’txw, a residential-school survivor. “I’ve been dealt the worst and my family has been dealt the worst of what this colonial history has brought. So it’s important for me, in my fifties, to say: ‘I’m sick and tired of it, too.’ ”

The father of two children, ages 11 and seven, he said he hopes to see changes in society so they don’t have to deal with racism as they grow up. “I’m here for them.”

In recent weeks, protesters have blocked bridges, highways, major intersections and rail lines, as well as the legislature on Tuesday.

“I feel bad for some of the inconveniences that certain people will have — missing appointments and travelling to certain destinations,” Sxwithul’txw said.

But he said what happened in the past 200 years to First Nations is “more than inconveniences — it’s lost lives, lost generations, lost people through the residential school system, Indian hospitals.”

The kind of support seen Friday is what is needed, he said. “We can’t do this alone. We need everybody.”

That’s why the duo delivered their personal thank-yous. “I never thought I would see anything like this. It’s incredible,” Sxwithul’txw said. “It’s about time and we are thankful.”