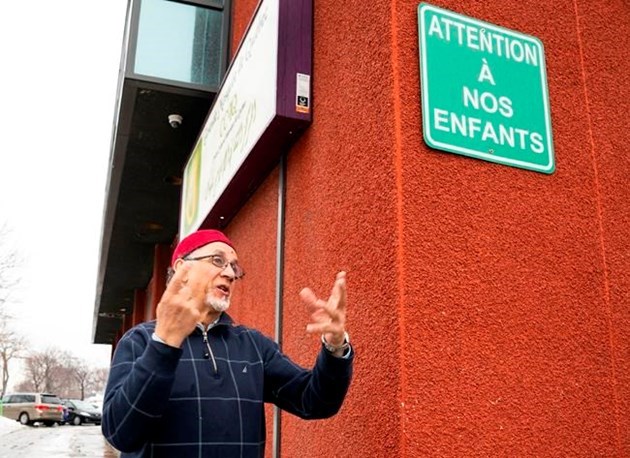 A little more than two years after their own community came under attack, Muslims in Quebec City said they were in shock over the mass shootings at two New Zealand mosques Friday that claimed at least 50 lives.

Their horror was echoed by members of other Muslim communities across the country as they offered condolences to the grieving families and spoke out against extremism.

"Hate has no place anywhere," Trudeau said in a statement. "We must all confront Islamophobia and work to create a world in which all people — no matter their faith, where they live, or where they were born — can feel safe and secure."

Boufeldja Benabdallah, the head of the Quebec City Islamic Cultural Centre, said a feeling of "indescribable pain" was apparent in his own community. He extended condolences to the New Zealand victims and expressed concern for families in Quebec City being forced to relive the Jan. 29, 2017 attack that left six men dead.

"I'm convinced they are feeling a terrible pain. Imagine the children of those families here in Quebec who are hearing it on the radio and will watch their mothers cry and ask, 'Why are you crying?' " Benabdallah said.

"The mothers will remember the 29th, when they ran to get husbands who were killed by Alexandre Bissonnette."

Benabdallah added that amid the mourning, it is time for people to speak out against extremism and for lawmakers to legislate against it.

"We must get back to work once again to explain, to tell these extremists of all stripes who politicize religion, like extremists who use race as a basis for discrimination, that we must change," Benabdallah said. "The world cannot continue like this."

During a vigil in Toronto, federal Immigration Minister Ahmed Hussen said it's important for people around the world to say no to hatred.

"We have to work every single day to eradicate this hatred in our midst," Hussen told the crowd at Nathan Phillips Square, many of whom carried signs bearing slogans such as United Against Islamophobia.

"And we have to tell those who peddle in this kind of hatred — whether they be ordinary citizens or whether they be politicians — that this is the logical extension of that hatred."

Police in many cities across the country said they were stepping up patrols around places of worship on Friday and communicating with local Muslim communities about their security concerns.

"We will have a heightened police presence in the community, focusing on places of worship — especially mosques. We have done this to ensure the city is as safe and secure as possible," said Const. Allyson Douglas-Cook, a Toronto police spokeswoman.

In Halifax, Imam Abdallah Yousri of the Umma Mosque said no special precautions were being taken, but he confirmed that the site, with a capacity of 2,000, already has a good security system.

"We will have discussions about that to see how we can enhance our security systems to make sure this kind of thing doesn't happen in the future," he said in an interview.

He said some members called to see whether prayers would go ahead as scheduled on Friday, and he assured them the mosque would be open. "It's always a special day on Fridays," he said. "We pray every Friday."

She said an attack on Muslims in a Western nation hits harder.

"When it hits a Muslim majority country we feel sad, we feel sorrow, however that feeling is a little different in a western democracy where we are minorities," she said. "Because it's pure and utter hatred. It's Islamophobia in its ugliest form."

The Islamic Supreme Council of Canada, based in Calgary, also spoke out against the attack.

Trudeau said Canadians join New Zealanders and Muslim communities around the world in grieving and condemning the attack and work to act against violent extremism.

"Far too often, Muslims suffer unimaginable loss and pain in the places where they should feel safest," Trudeau said. "Canada remembers too well the sorrow we felt when a senseless attack on the Centre culturel islamique de Quebec in Ste-Foy claimed the lives of many innocent people gathered in prayer."

Mohamed Labidi, a past president of the Quebec City mosque, told reporters Friday he regretted that humanity had not learned its lesson after the attack on his community.

A fellow mosque member said the question remains why these attacks continue to happen.

"The reaction is the same as what we experienced already," said Alpha Barry. "We have been affected, our population is affected and we keeping asking why? Why is this happening every day?"

Parliament lowered the flag on Centre Block to half-mast in honour of the victims — a move followed in other provinces and cities. Vigils were also planned in various Canadian cities in memory of the victims.

One man was arrested and charged with murder in what appears to have been a carefully planned racist attack in New Zealand.

There are unconfirmed reports that the shooter was influenced by Bissonnette, the former Universite Laval student convicted of killing six worshippers in 2017.

A now-deleted Twitter account that is believed to be linked to the accused shooter shows what appear to be three assault-rifle magazines, one of which has Bissonnette's name on it.

Aymen Derbali, a survivor of the Quebec City attack who was left paralyzed, said he was devastated when he saw video of the New Zealand attack.

"Certainly for me, when I saw the video this morning, it brought back what we experienced here," he said outside the mosque.

"The hardest thing is that he was inspired by what happened here. He had the killer at the mosque here as an idol. It was written on his weapons."

Bissonnette was sentenced to life in prison without possibility of parole for 40 years, but the Crown and his lawyers both recently announced they are appealing the sentence.

Through his lawyers, Bissonnette, who is seeking a reduction of his sentence, issued a statement Friday saying he was "very affected" that his name was linked to the New Zealand attack. His lawyers said in the statement that Bissonnette's decision to appeal wasn't meant to minimize his actions.

Evel Knievel's son suing Disney over 'Toy Story 4' character
Sep 25, 2020 6:35 AM
Comments
We welcome your feedback and encourage you to share your thoughts. We ask that you be respectful of others and their points of view, refrain from personal attacks and stay on topic. To learn about our commenting policies and how we moderate, please read our Community Guidelines.