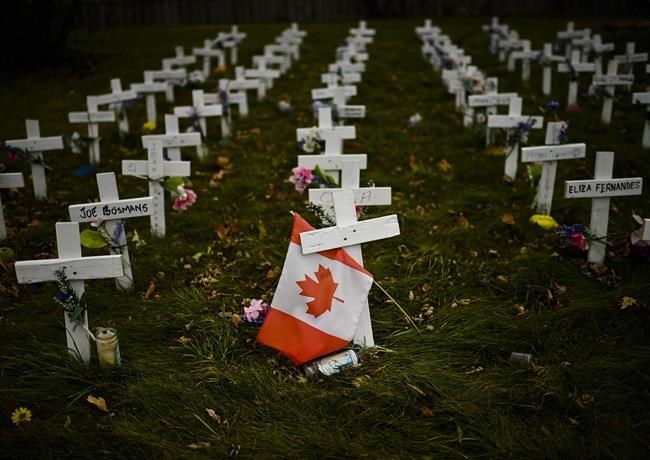 Francois Legault said Thursday that there can be gatherings of 10 people between Dec. 24 to 27 in Quebec, provided the province's infection and hospitalization numbers don't get out of control before then.  He urged people to limit their contacts with others for a week before and a week after that period.

“We’ll need strength to get through this pandemic and to find this strength, we need our families," he said.

The proposal calls for schools to be shut for an extended period around the holidays, but classes will be taught remotely during those extra days. Schools are to close on Dec. 17, a few days earlier than planned. Primary schools are to return as planned between Jan. 5-6, while secondary schools would return Jan. 11.

Restrictions on gyms, restaurants and other businesses in hard-hit areas have also been extended to Jan. 11.

Quebec recorded 1,207 positive tests in its update Thursday. There were 34 new deaths, including seven in the past 24 hours.

There are 651 people hospitalized with COVID-19 in that province, along with 101 in intensive care.

Manitoba, which has the highest per capita infection rate in Canada, announced it's tightening the rules for social gatherings and shopping.

"They continue to cause significant strain on our health-care system."

Over the past five days in Manitoba, 14 per cent of COVID-19 tests have come back positive.

Starting Friday, people will no longer be allowed to have visitors in their home unless they are providing supports such as child care, tutoring or health services. Anyone who lives alone can have one visitor over to socialize.

Stores can only sell essential items inside and must close off sections that offer non-essential goods such as consumer electronics. Capacity in big-box stores will be limited to 25 per cent of capacity or 250 people, whichever is less.

A surge in cases in British Columbia is behind provincewide restrictions announced Thursday as the provincial health officer made it mandatory to wear masks in public spaces. Social interactions will also be under new restrictions until Dec. 7.

Dr. Bonnie Henry earlier imposed restrictions on social gatherings in areas covered by the Fraser and Vancouver Coastal health authorities, but says COVID-19 is spreading to other places and the order will now be provincewide.

That means all worship services and community and social events will be suspended, along with high-intensity group fitness, such as interval training, hot yoga and spin classes. There are exceptions for baptisms, weddings and funerals, but they are limited to 10 people.

Ontario is expected to announce new restrictions for hard-hit areas in Toronto and surrounding regions on Friday, but Premier Doug Ford had no details on Thursday when his cabinet was set to discuss recommendations from public health officials.

"As it's looking, these measures — they will have to be tough in the hardest-hit areas," he said.

"We're seeing concerning trends. Our hospital ICUs are in jeopardy. Our long-term care homes are at risk. We have some difficult but necessary decisions to make."

Ontario had 1,210 new cases of COVID-19 on Thursday, along with 28 new deaths from the virus. There are 526 in hospital, including 88 on ventilators.

There are 150 COVID-19 patients in intensive care, according to the Ontario Hospital Association. The Ontario government's medical advisers have said that's the threshold at which hospitals would need to cancel surgeries.

In the North, Nunavut, which recorded its first COVID-19 case less than two weeks ago, reported four new infections for a total of 74.

The territory started a two-week lockdown Wednesday of non-essential businesses, schools and other services.

Yukon, which has 26 confirmed cases, is re-imposing a two-week isolation period for most people entering the territory starting Friday.

Alberta reported a record 1,105 new cases in its Thursday update along with eight more deaths. There are 284 people in hospital, including 61 in intensive care.

Health officials in Saskatchewan reported 98 new infections Thursday, but said weather and other issues meant some samples didn’t arrive at the lab in time to be reflected in the daily count.

Meanwhile, the Canadian leading a United Nations road map for COVID-19 recovery said much human progress has been eroded by the pandemic and that now is the time to make lasting changes.

"This pandemic has been a grand revealer of the many challenges that our world faced before the pandemic, and of course, we're going to face afterwards," said Steven Hoffman, the scientific director of the Institute of Population and Public Health at the Canadian Institutes of Health Research.

He noted 71 million people have been pushed into poverty in 2020, 90 per cent of students were out of school at some point and that rates of domestic violence have increased by 30 per cent in some countries.