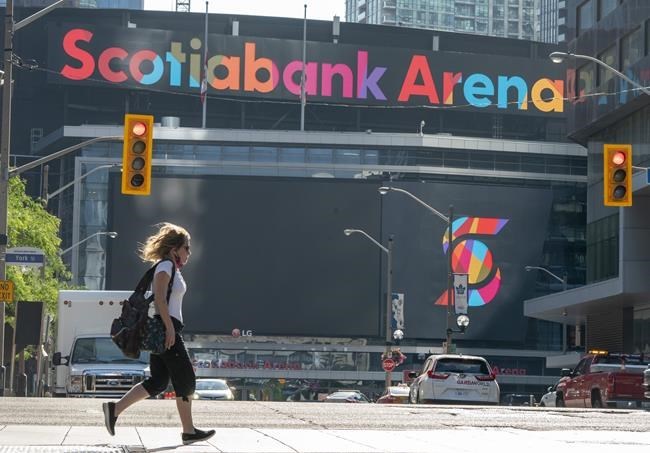 Masai Ujiri and the Toronto Raptors boast about having one of the best fan bases in the league.

But due to COVID-19, it's going to be a long-distance love affair for now.

The Raptors will start their season playing home games in Tampa, Fla., next month after being unable to come to an agreement with the federal government to play at Scotiabank Arena during the global pandemic.

Ujiri said the current public health situation facing Canadians, combined with the team's urgent need to find a place to play, led to the decision to announce Tampa as a temporary home.

"So we’ll be away from our home and our fans for now," the Raptors president said in a statement. "They say absence makes the heart grow fonder. I’m not sure that’s possible for us — we love Toronto and Canada, and we know we have the best fans in the NBA. For now, I’ll ask you to cheer for us from afar, and we’ll look forward to the day we are all together again.”

A statement from Health Minister Patty Hajdu's office said the decision was made based on advice from the Public Health Agency of Canada. The office says it will continue its dialogue with the Raptors.

"The resumption of sports events in Canada must be undertaken in adherence to Canada’s plan to mitigate the importation and spread of COVID-19," the statement said. "Like other countries, Canada is working on plans for a measured resumption of sports, including, both professional and amateur sporting events."

The Raptors had hoped to start the 2020-21 campaign at home despite rising numbers of COVID-19 cases at home and in the United States. But the decision was written in the spikes in cases, the Canadian government's restrictions around cross-border travel and the mandatory 14-day quarantine for people entering Canada.

It proved too much for the country's only NBA team. And "We the South" was trending on Twitter on Friday soon after the news broke.

The Raptors will play out of 20,500-seat Amalie Arena, home to the Tampa Bay Lightning.

General manager Bobby Webster said earlier this week that, with time ticking down to the Dec. 1 start to training camp, there were countless collective work hours spent on this decision daily, with numerous starts and stops with each location. The team had looked at several options, with Nashville and Buffalo believed to be among the possible destinations.

Webster said the important factors in choosing a temporary home were the practice facility, medical facilities, and an arena that fit NBA standards — particularly with broadcast requirements — and had available dates.

"And then, lifestyle matters," Webster said earlier this week. "I think at some point we're asking people here to uproot their lives and go to a place that they may potentially be away from their families for six to seven months. So, we want to be respectful of that, and we want people to feel like we're going somewhere where we feel safe and they feel like they can settle in."

Florida has been a COVID-19 hotspot. It had 9,085 new cases on Thursday and is third-highest in total cases among states.

If COVID-19 shows signs of abating, and with a natural break in the season coming during the all-star break in early March, Webster suggested there might be "an opportunity to transition back" to Toronto."

The schedule for the season, which tips off Dec. 22, is being released in two parts.

The 2019 NBA champions haven't played a home game since a 99-96 loss to Charlotte on Feb. 28. A couple of days after returning from a five-game western road trip, the league shut down due to COVID-19.

They're familiar with Florida. Just before the season resumed, they held a camp in Fort Myers — a sort of pre-bubble bubble. The season restarted July 30 under strict health protocols at a sealed-off complex at Walt Disney World near Orlando, Fla., and was deemed a success, with no positive coronavirus tests.

The Raptors join the Toronto Blue Jays, Toronto FC, the Montreal Impact and the Vancouver Whitecaps, who played most of their respective seasons south of the border.

Like the Raptors, the Blue Jays appealed to the provincial and federal governments to play at home but were denied. They relocated temporarily to Buffalo.

The 2019-20 NHL season also paused in March before continuing in the hub cities of Toronto and Edmonton.

Canadian curlers prepare for prospect of a Calgary "bubble"
Dec 3, 2020 6:35 AM
Comments
We welcome your feedback and encourage you to share your thoughts. We ask that you be respectful of others and their points of view, refrain from personal attacks and stay on topic. To learn about our commenting policies and how we moderate, please read our Community Guidelines.