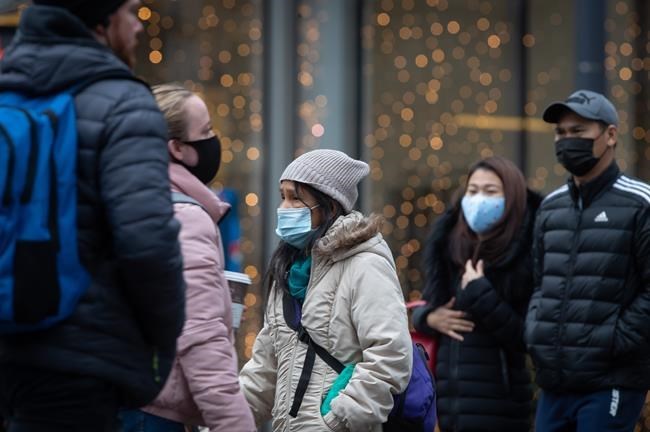 Canadians willingly, unwillingly, and sometimes unknowingly, gave up some of their civil liberties over the past eight months to try and slow the spread of COVID-19.

Legal experts who specialize in personal freedoms have spent most of 2020 making sure those public health restrictions didn't go too far and now they're working to ensure those rights are restored when the pandemic finally comes to an end.

Abby Deshman, the director of the criminal justice program for the Canadian Civil Liberties Association, said that a lot depends on how long COVID-19 remains a general health concern.

"After 9/11 things did not go back to pre-9/11 conditions in terms of civil liberties," said Deshman. "We radically altered our expectations in terms of security at airports, court houses, government buildings, all kinds of places.

"Part of the reason that has such a long-term impact because there was still the idea that the threat was out there."

COVID-19 will hopefully be different because its impact is measured provincially and regionally on a daily basis, said Deshman.

Experts agree that mandatory masks in public spaces, limits on the number of people that can attend public gatherings, restrictions for worship services, freedom of movement are among some of the public health measures that most clearly infringe upon constitutional rights.

Christine Van Geyn, litigation director for the Canadian Constitution Foundation, said that although all those restrictions are unconstitutional, they are acceptable as long as they are clearly designed to protect Canadians' right to life and security.

"It's a really complicated question," said Van Geyn. "We don't know where the court would say these restrictions have gone too far, there's not a bright line where we can say 'aha! you've gone too far!'"

Van Geyn also pointed out that most provincial emergency orders have to be renewed every few months to keep them enforceable. When the pandemic is over, the orders will simply be allowed to lapse.

But just because orders are constitutionally acceptable or are temporary, doesn't mean they haven't been problematic.

Both Deshman and Van Geyn pointed to orders in Atlantic Canada as too restrictive. Deshman said that Nova Scotia's original orders were so broad that they basically forbid people from gathering outside the home, even as it had been proven that limited gatherings in outdoor settings could be safe. Van Geyn pointed to Newfoundland and Labrador's ban on travel which was challenged in court and subsequently overturned.

Advocates said that the laws and policies created in the early days of the pandemic were more problematic because they were written hastily and were very broad. According to Deshman, that's a concern because the more broadly written a law is, the more it's open to interpretation.

The most notable example of this came in early April, when Ontario passed an emergency order that allowed police services to obtain the names, addresses and dates of birth of people who had tested positive for COVID-19. The portal was aimed at helping to protect first responders.

A legal challenge filed by a group of human rights organizations put an end to the practice on Aug. 17.

A CCLA audit of the database's usage found that more than 40 per cent of the 95,000 searches of the database were conducted by police in Thunder Bay and Durham Region.

Thunder Bay police accessed the personal health information in the database more than 14,800 times — a rate of access 10 times higher than the provincial average — even though the area reported a total of just 100 COVID-19 cases while the database was active.

Caitlyn Kasper, a lawyer with Aboriginal Legal Services, said that her organization is asking that police services that abused the database be penalized.

Fareeda Adam, staff lawyer at the Black Legal Action Centre, agreed with Kasper that emergency measures disproportionately impacted racialized communities. However, she hoped that the use of online streaming platforms to broadcast high-profile court cases would continue after the pandemic.

Adam pointed to the thousands of people who watched the trial of a Toronto police officer convicted of assault in the brutal beating of a young black teen in Oshawa, Ont.

"The number of people who accessed that broadcast, who watched what was happening in real time, the decision of the judge, that's so important to participate in that," said Adam. "To have it available and accessible at a widespread level, that's so important."

Kasper agreed that broadcasts of court proceedings helped elevate some cases, like an ongoing land dispute between residents of Six Nations of the Grand River First Nation and a land development corporation. But she also pointed out that Canada's jump to online education and justice services has further disenfranchised remote Indigenous communities in the north that do not have reliable access to the Internet.

"You don't have a connection, you don't even have a dial-up connection that is reliable and that you can access any kind of video feed," said Kasper.