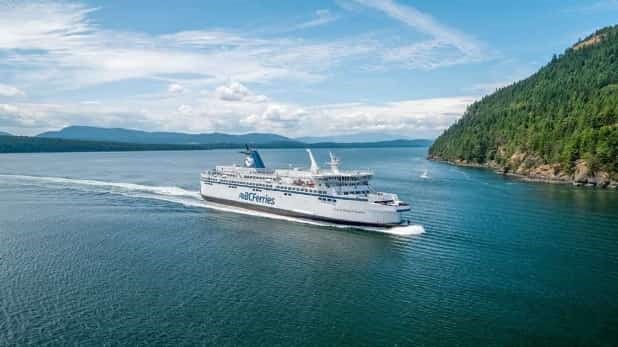 Passengers and crew on two B.C. Ferries vessels were delayed on the long weekend, with one incident involving a swimming bear and the other a naked human.

On Monday, Coastal Celebration, set to leave Swartz Bay at 4 p.m., was delayed about 30 minutes after a woman was reported to be intoxicated and naked in a vehicle.

RCMP responded and an investigation continues.

On Saturday morning, Queen of Oak Bay was held up briefly at Departure Bay in Nanaimo to give a swimming bear a chance to pass.

B.C. Ferries spokeswoman Astrid Braunschmidt said the ferry was set to leave at 8:45 a.m. for Horseshoe Bay in West Vancouver, when the crew noticed the swimming bear.

“She had to slow down because some of the crew noticed a black bear swimming just outside the berth,” said Braunschmidt.

“So they took a few minutes to let the bear pass and docked in Horseshoe Bay about 10 minutes late,” she said. “There was a bit of a delay but they had to let the black bear pass.”

Otherwise, ferry travel on the long weekend was relatively smooth. A few passengers without reservations had to wait for a sailing or two to leave Vancouver Island.

But reserved passengers all travelled without delays, Braunschmidt said. “It’s been a pretty good long weekend for us.”

B.C. Ferries laid on extra sailings for the long weekend: 66 extra sailings between Swartz Bay and Tsawwassen, 15 between Departure Bay and Horseshoe Bay, and 11 between West Vancouver and the Sunshine Coast.

Will the Canucks make the playoffs? Opinions are split among pundits and analytics
Jan 13, 2021 2:15 PM
Comments