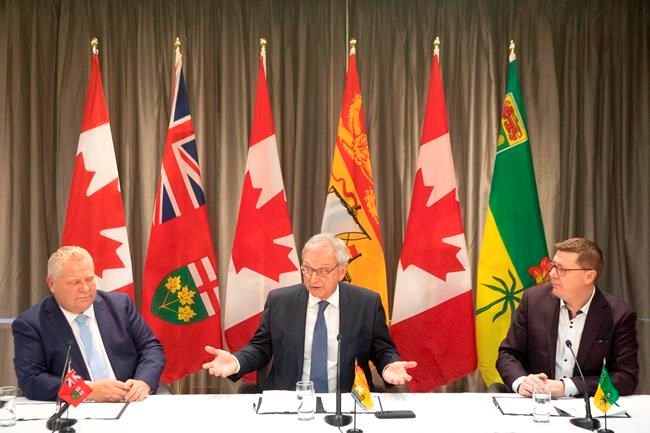 In Saskatchewan, 48 per cent of those who took part had a somewhat positive view of Scott Moe, with 36 per cent holding a somewhat negative opinion.

Ontario's Doug Ford, meanwhile, was highly unpopular at home and across the country.

The survey was conducted Nov. 15 to 25 among 3,040 Canadians eligible to vote who were randomly recruited from an online panel.

Premiers gather in Toronto on Monday to try to come up with a cohesive plan to advance their interests in a national context. The meeting comes just weeks after Justin Trudeau's federal Liberals returned to power, but with a minority government and no Grit MPs from Alberta or Saskatchewan.

Kenney and Moe have been pressing Ottawa to do more to revitalize the flagging oil-and-gas industry that is so vital to their region.

The indication that a sizable number of voters in Alberta and Saskatchewan hold less-than-favourable impressions of their provincial leaders does signal a need to "put the pressure on Ottawa even more to satisfy their own electorate," said Leger executive vice-president Christian Bourque.

The numbers might explain the fact Ford stayed largely out of sight during the federal campaign as well as his recent efforts to make peace with Trudeau, Bourque said.

Ford is slated to face the electorate in two-and-a-half years.

"There is still enough road ahead, but I think the recovery probably will be slow and difficult for him," Bourque said.

By contrast, 65 per cent of respondents in Quebec had a somewhat positive opinion of provincial leader Francois Legault.

The survey also looked at views on the political fate of Andrew Scheer, who faces calls from several quarters to step down as federal Conservative leader after failing to unseat Trudeau's Liberals.

"It seems to me it's getting tougher and tougher for Mr. Scheer to stay on," Bourque said.

NDP Leader Jagmeet Singh exceeded many people's expectations during the campaign, even though his party lost 20 seats from its 2015 total.

The sentiment was reflected in the survey, with 87 per cent of NDP voters saying Singh should stay on as leader.

The polling industry's professional body, the Marketing Research and Intelligence Association, says online surveys cannot be assigned a margin of error because they do not randomly sample the population.