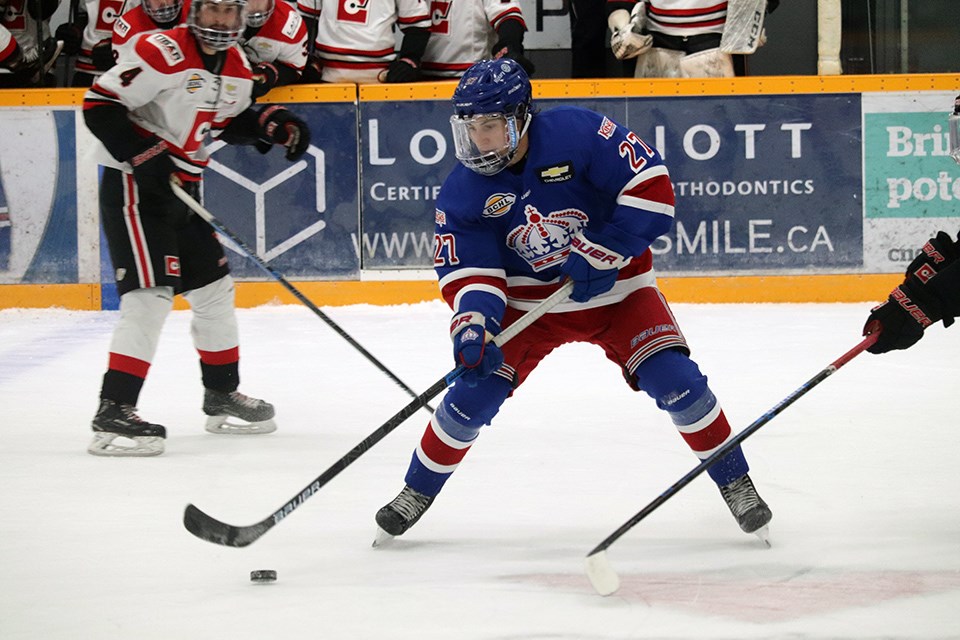 Use whatever phrase or slogan that you prefer because the Prince George Spruce Kings recorded what was one of their biggest scoring nights in team history, easily beating the Merritt Centennials by a score of 11-2 Wednesday night (April 7).

Andrew Seaman and Christian Buono scored a pair of hat-tricks and an assist for four points each, the first time ever in their BCHL careers.

Between the two forwards, they potted four goals on special teams, including one from Buono while short-handed to light the board four minutes into the contest.

Seaman followed with his first of the night 51 seconds later; the Cents cut the lead to 2-1 before the end of the opening frame.

Buono, Connor Elliot and John Herrington all scored within a span of 1:21 during the early stages of the second stanza, forcing Merritt to make a goaltending change from Colton Phillip-Watts to Josh Dias.

Seaman's second goal of the contest came with 40 seconds left in the period, eventually concluding a game-high 16 shots in the middle 20 minutes of play.

It also didn't take long for Seaman to score his third, 23 seconds into the third for a total of 63 seconds between lamps for the touchdown and 7-1 lead.

Cents got one back three minutes later, but that's all they could muster in any hope of a comeback.

From there, Prince George scored their final four markers in a span of 4:21, which started with Buono's third of the evening while on a power-play.

Carter Cochrane and captain Mason Waite contributed their firsts of the pod campaign, then rookie Linden Makow, in his first BCHL game, notched his first career junior 'A' goal.

The 16-year-old Vanderhoof product also provided an assist to Herrington's earlier goal, who was also his former Cariboo Cougar teammate and captain from the 2019-20 season.

In total, 13 of the 17 Spruce Kings skaters got on the stats sheet at least once, six of whom recorded multi-point performances.

Aaron Trotter backstopped Prince George to turn aside 16 of 18 shots; his team pushed 37 pucks towards the Merritt cage.

The Spruce Kings improve to 2-1 through the first three tilts of the 20-game BCHL season and extended their win streak to two games.

Prince George is back on ice tomorrow (April 9), 5 p.m. against the pod-host Chilliwack Chiefs as the designated visiting team.