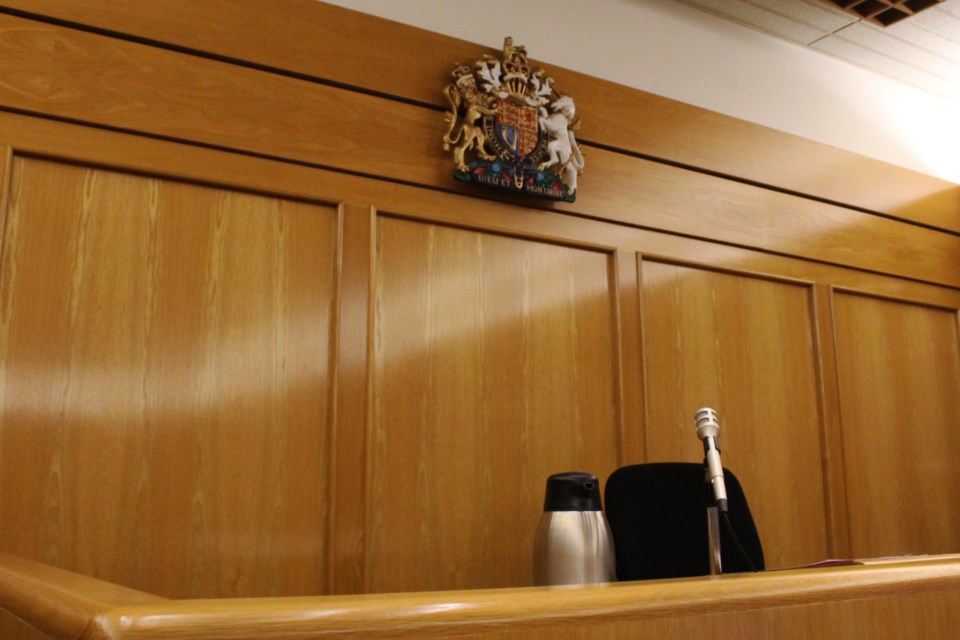 A judge's chair. (via Eric Thompson)

A defence lawyer for a man accused of stabbing a girl to death in a British Columbia high school has suggested a hospital could potentially be liable for discharging his client from the emergency room two days earlier instead of providing him with psychological treatment.

Martin Peters questioned a social worker about having spoken with the risk management team of Abbotsford Regional Hospital before testifying Tuesday about her dealings with Gabriel Klein on Oct. 30, 2016.

"I'm asking about your concerns in coming here to testify in court and having a discussion with risk management that a patient who was released two days before was not kept at the hospital for treatment by a psychiatrist, that he was released into the community and killed," Peters said.

Faye Reglin said she'd spoken with the team about similar issues she discussed with a lawyer regarding proper conduct in a courtroom.

She said Klein did not show any signs of psychological distress or agitation and made eye contact with her in an examining room of the emergency room where he arrived complaining of scratches to his hands from working with chickens.

"Based on my assessment I did not have any concerns," said Reglin, who told the court she gave Klein a bagged meal and called a cab so he could go to a shelter where she'd arranged a bed for him because he had nowhere else to go.

Reglin said that when she spoke with police two days later and learned Klein was a suspect in the stabbings she was puzzled.

"I tried to fit the puzzle together," she said haltingly. "I guess I was tired, I was confused. Yeah, it's hard to describe."

Klein has pleaded not guilty to second-degree murder in the death of 13-year-old Letisha Reimer on Nov. 1, 2016, and aggravated assault in the wounding of another student whose name is protected by a publication ban.

The court has heard Klein was taken to hospital after he allegedly walked into a high school's rotunda and fatally stabbed a girl and wounded another student as they sat on chairs.

Crown lawyer Rob Macgowan said in his opening statement that Klein's defence will be that he is not criminally responsible because of a mental disorder.

Andrea Desjarlais, program co-ordinator of the Lookout Shelter, testified that Klein left the facility on the morning of the stabbings after demanding she call his mother in Alberta.

Desjarlais testified she'd called the woman but when she told Klein his mother wanted contact only by email he became "verbally aggressive."

"The only thing I can remember him saying is, 'Why can't you make the call for me?' "

She said Klein demanded the shelter immediately get him a bus ticket to Edmonton but that she'd already explained that the process would take a couple of days, prompting him to leave her office.

"At that point he just continued with his anger. He wanted it now. He wanted to leave now."

Desjarlais said she heard banging outside her office and believed Klein was hitting lockers where clients store their belongings and then heard what she thought was him kicking the bathroom door from the inside.

She said she advised two employees to stay in her office before Klein cleared out his belongings but then he appeared calm and "had no facial expression" before walking out.

The Crown has said Klein then went to a sporting-goods store where he stole a hunting knife that was shown in court as the weapon used in the stabbings.

Earlier Tuesday, a member of an emergency-room security team told the trial Klein was confused and made no eye contact when she interacted with him in the waiting room on Oct. 30, 2016.

Kylee Evanuk said Klein told her he needed to call his mother though no one answered her repeated calls to a number he provided.

Evanuk said two days later, the same man was brought into the ER in restraints surrounded by police after the hospital was notified patients would be arriving in serious condition, perhaps suffering from gunshot or stab wounds.