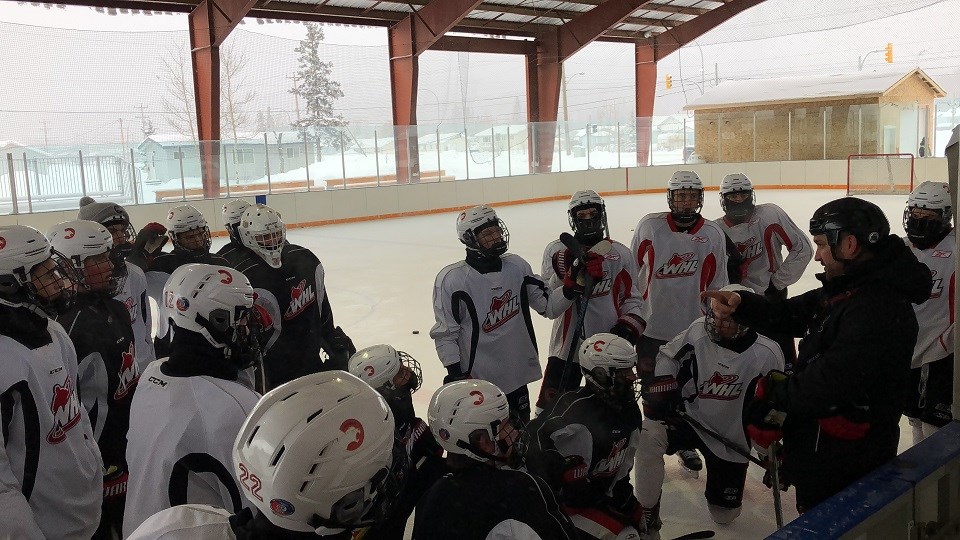 A cold -25 C took over the morning skates ahead of the 2020 BC Winter Classic between the Cariboo Cougars and the Vancouver North West Hawks.

After each other’s pre-game practices at Ernie Sam Memorial Arena, both teams agreed that regardless of what happens on the ice, this installment will get physical as the major midget clubs are in the top five of the provincial standings.

Cariboo’s RJay Berra and Vancouver North West’s Ryan Hollweg, assistant coaches for their respective clubs, agreed the elements will be challenging, but not enough to take over what’s to come inside the glass this evening (Jan. 18).

“You have to figure out what works best for you, figuring out what layers you need to wear to keep warm, but not let it affect your game,” said Berra in an interview with PrinceGeorgeMatters.

“The other thing is just be moving at all times, just be as quick as you can and do everything as fast as you can. At the end of the day, the adrenaline takes over.”

A snowy start to Saturday (Jan. 18) for the @cariboocougars’ 2020 BC Winter Classic day 🆚 North West Hawks in #FortStJames. Temps are expected to hover around -15 C by the 5:30 p.m. puck drop at Ernie Sam Memorial Arena | #CityOfPG #BCHockey @PGMatters pic.twitter.com/JR8eq2pSYp

“We can only control what we throw on the ice and how the boys play,” said Hollweg also speaking to PrinceGeorgeMatters.

“You gotta just roll with it and see how it goes. From what it sounds like, the ice conditions will be better than last year, so that’s a bonus, so we’ll go out there and see what happens.”

The coaches are also not strangers to playing outdoors themselves with both enduring a stint in Europe, including Berra in northern Italy.

“A handful of the rinks in our league were either half-covered or just roof, and then we played on one that was just straight outside with concrete stands. It’s kind of like Kin 1 [in Prince George], but just outside and it was pretty cool. [...] We played at a couple of rinks in Germany, we played some in Austria that were all kind of open-ends in a roof like this one too.”

This is the second year in a row the Cariboo Cougars are hosting the BC Winter Classic, said to be the only event in Canada’s history where major midget hockey teams play a regular-season game outside.

Over half of the team from the inaugural match last year is returning, but for goaltender Kenny Gerow and other rookies, this will be a first and an experience he says he’s grateful to be a part of.

“Definitely lots of layers,” the 16-year-old said when asked how he will prepare for the cold conditions expected tonight.

“Two pairs of everything, shirt, balaclava [ski mask], hopefully I don’t overheat. I felt pretty good out there when I was out there. I didn’t feel too cold or too warm, but it’s definitely going to be tough standing in one spot for that long.”

Gerow, like Berra and Hollweg, expects a physical contest as two ‘W’s are still at stake, all agreeing there’ll be quick shots from everywhere and clogs of players in corners due to the smaller rink size.

“We’re here to get four points throughout the weekend,” said Hollweg about his Hawks’ mentality coming to northern B.C. and participating in the annual spectacle.

“We’ll have to fight through whatever is thrown at us in the game, but the reality is both teams are going to be dealing with the same conditions, so we just gotta pull it together and try to get two points today and tomorrow.”

In their first set of meetings back in November, the two teams split tight contests in North Vancouver with the Cougars taking the season-series opener 2-1 and the Hawks prevailing 3-1 in the second.

Berra believes anyone in the BC league ‘can beat anyone at this point.’

“You’ve seen a lot of upsets, a lot of splits, especially among the top five teams; there’s been a lot of splits lately and, you know, I think we match up pretty well against them and they’re a really good hockey team, but I think we’re also a good team. So I think whoever shows up has the better chance of winning.”

When asked if living in the north will have the upper hand at Ernie Sam Arena, Berra thinks the scales may tip in Cariboo’s favour.

“But when the puck drops, I think it’s all pretty much even and that there’ll be just a bunch of excited kids out there ready to go.”

Puck-drop in Fort St. James goes for 5:30 p.m. and those coming to the game are being advised to dress warmly for the occasion.

The Northern Capitals' outdoor contest against the Greater Vancouver Comets is scheduled for tomorrow (Jan. 19) at 9 a.m.